Home » Categories » Treks » Best treks in Autumn in the Himalayas 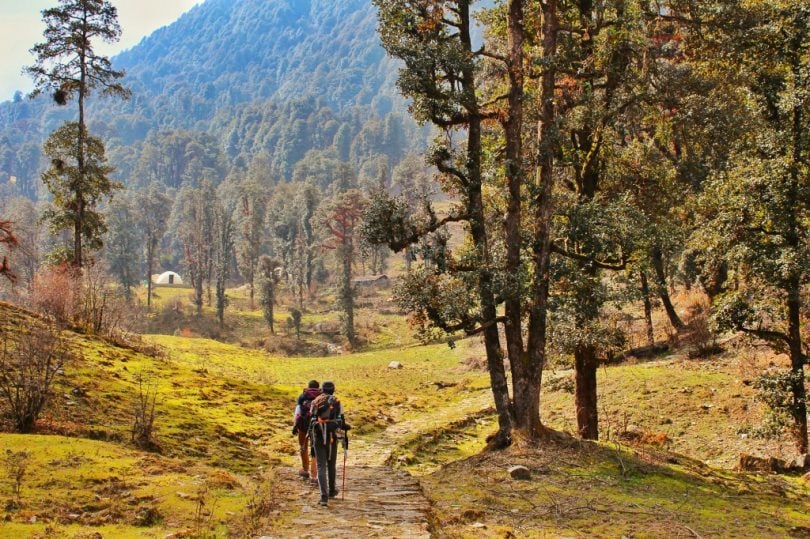 Trekking to the base camp of this mighty Annapurna Summit is in itself a feeling of pride. And doing it in the autumn means yielding the best out of it as you walk amidst the mountains of Nepal. Take a feel as you camp at the base camp of Mt. Machapuchare and watch every ridge stand out sharp & shining. Thanks to the crisp autumn sunlight and rainless chilly weather. But when you have so much to take from this trek, the trek in itself also gets demanding. Whatever strength you put in, you will be rewarded in the surplus that’s for sure.

One reason that should be more than enough to set your foot on this trek is that it takes you through the wilderness on the Nanda Devi Biosphere and offers an unprecedented vista of Mt. Nanda Devi shining out of the clouds. Autumn makes for the time best suitable to see the birds coming out of the high oaks as you walk on the bed of leaves. Exiting the canopy of oaks you enter a world of Bugyals giving you an unobstructed view of Neelkanth, Chaukhamba, and many more. And guess what you can capture these peaks in the most crystal clear form due to the post rainfall effect.

Imagine having sight of water gushing its way out of a cave beneath a huge rock. That’s what makes our holy river Ganga and if it’s inviting you for a dip than mind it, the water will be ice-chilled coming straight from the glaciers. It is one of those rare treks that gives you a chance to witness a peak all from its base without any other mountain sneaking in between you and your sight. The trek comes with a view of Mt. Shivling, Mt. Sudarshan, and a fin of a shark, Mt. Meru. Hurrah !! All this is possible because you are here at the best time of the year. The trail gets steep and you get to climb & jump over the boulders in order to make to your destination. If that’s not enough to get you going then crossing a glacial stream Akash-Ganga will. So, brace up yourself and put your fitness level at test.

Want to have a break from crunching those numbers at your desk. Then come here to crunch some more but not numbers. Autumn makes the trail covered in shades of brown rhododendron leaves. Even a day falls short for witnessing the unique shape of Mt. Chaukhamba that’s possible only on a clear day. Not only the views atop Chandrashila are spectacular but also get to capture a myriad of birds then you wouldn’t have a chance to capture elsewhere. Your trek begins with a dense thicket at sari followed by a forest of oaks, rhododendrons, and pines. Further, as you ascend from chopta to chandrashila peak the snow-clad peaks fill your sight and en route you stop by to worship at Tungnath temple, the highest shrine of Lord Shiva.

Making to the end of the list doesn’t mean that Sandakphu is not a good choice to make. In fact, I would call it the best choice. I don’t recall any other trek that gives a window with a view of four of the tallest mountains namely Everest, Lhotse, Kanchenjunga, and Makalu. Not only this but the colours of the rhododendrons, bamboo, and pines make it even more inviting. Oh, wait! Did I mention you can even spot a red panda in the autumn colors of the forests here? So keep an eye on the wildlife here are you never know what you get to spot.

Calling for the coda of this long and hopefully intriguing write up I would just say that autumn treks in the Himalayas make the colours, smell, and the scale of beauty all the more enhanced and such uncluttered treks can bring much more clarity to your mind.