Home » Categories » Treks » 10 Mountain Features every trekker should know about 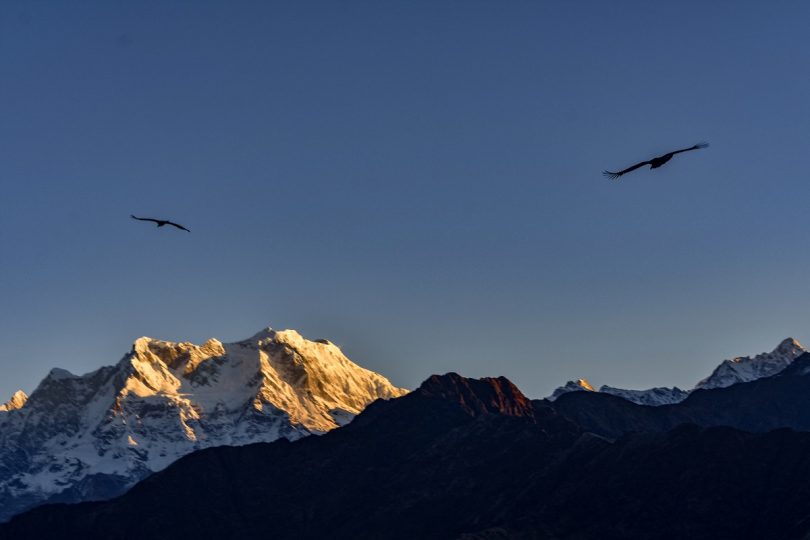 The joy and thrill of a trekking trip are unmatchable. For many of us, it’s the closest encounter with nature in its purest form. The beauty of mountains, trails, trees, lakes, and the combined significance of fauna, as well as flora, enchants our senses in subtle ways. But you would never want to fall short of words while describing your captivating trekking encounters to others. Knowledge of the diverse mountain features will be vital for you when you trek in a mountainous region that is unknown to you.

The following are the 10 most important and popular mountain features that you must be aware of to effectively navigate your trek route, and make wise and calculated decisions wherever needed.

Mountain passes are often clearly outlined and navigable routes lying in between the mountain ridges. They aren’t just exciting and accessible for trekkers but plenty of them also holds historical significance. In the ancient era, the mountain passes always had an important role to play in wars, trades, and migration.

Ordinarily, the passes are situated atop the source of river waters. Passes connect two valleys without providing an aerial view of the terrain. The mountains may vary in size and accommodate the valleys unfolding over several kilometers.

While passes don’t have a peak, they possess a high point which plates a panoramic view of the surrounding valleys.

A ridge consists of various valley chains of mountains that form a raised crest extending to several miles. Because of the mountainous structure, the sides of these elevated regions of hills slope downwards on either side.

Another term associated with this trekking and mountainous structure is the Ridge Line. It composes a line drawn over the highest points of these valleys or the tops. Trekking on the ridges will require some expertise as they have circumscribed spaces.

Arête is a kind of ridge on which the Mountaineers can climb by using the “Laybacking” technique.

The lateral ridges descending from the mountains or hills which connect the various mountain areas from top to bottom of a mountain are termed as spurs. Most Spurs are home to mountainous tribes.

The gentle slope or the spur is what many of the mountaineers trek on unknown to the feature. Anyone can find these tongue-shaped spurs on a map. The route of a ridge descends from the high altitudes of a mountain.

Remember that the sides of a spur are steep and therefore you should be extremely cautious while walking on them.

While trekking, you may also come close to a Col, which is the lowest-lying line in between two different ridges. Col is a geomorphological gap lying in between two elevated land areas. Extremely rugged Cols are termed as Notches. The feature is deep enough to thrill you and is opposite to a mountain pass.

They can have underlying dangers (like tumbling rocks or invisibility of the terrain ahead) and are also unnamed in most cases.

The main mountainous mass of land of a given hilly region is termed as Massif. This region may also be demarcated by the flexures (region displaying bending of rocks) and the faults. Because the section of the earth crust can be more rigid when compared to the surrounding landmasses, a tectonic movement or application of natural force will result in the movement of this piece of land as a whole or complete unit.

Some massifs can even be bigger than mountains and consist of different hill areas that are grouped together. Apart from the mountains, massifs can also be found under the sea.

A saddle is the highest point of a mountainous landform that lies in the lowest region of a mountain. Depending on the topography you may find a saddle to be convenient to a walkthrough or even very rugged.

The terminology can also be interrelated here and many people define Col as the lowest point in a saddle. Saddles are considered to be the best mountain feature for recreation.

Any mountain will have only one summit, and that is why all mountaineering expeditions are judged on the basis of attempts made towards reaching the summit and not the peak.

Verglas are the solid and hard mountain surfaces over which sheets of ice may be deposited because of the icing of rainwater or other water flows. The feature can also be a hazard and danger which the trekkers may have to face. Especially when they are trying to move quickly in the morning or in the afternoon.

When the ice sheet is thick, obdurate materials like ice axes should be used to break the ice and for probing the area.

Before we describe what a Tarn is, it is important to define a Cirque. A surface found by the erosion of glaciers and having the shape of a valley (resembling an amphitheater and/or other kinds of shapes) is called a Cirque.

The water pool, ponds, and mountain lakes that form in this land region excavated by a glacier are termed as a Tarns.

The ice spikes that are formed by the freezing of dripping water from various kinds of objects are icicles. Icicles can be quite common in the mountainous and hilly regions where water falling from the trees may freeze and give an enchanting view. But remember that icicles can also be dangerous if they fall when someone is right underneath them.

Trekking is now popular throughout the world and our professional trekking services ensure that you have all the necessary aids while trekking. JustWravel’s supplies include medical supplies, oxygen, and trekking gears. It is important to gain as much information as you can so as to avoid all the threats on your way up to the trek.

You should also read about :