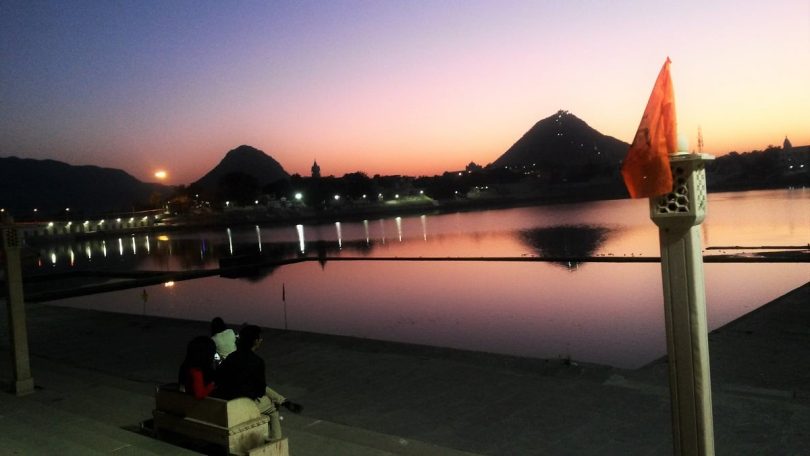 There is a running joke that “Indians cannot make a queue.” But all I could see in Delhi on 18th December’ 16 were queues outside ATMs long enough to run through entire breadth of certain smaller countries. Okay, there might be a bit of exaggeration in there but still, there was no possibility of withdrawing money that evening for me. Still, extracting a few drops of positivity from the tragic situation, I thought what a fantastic opportunity it was, to experience the effects of DEMONetisation on travelling. With that thought in mind and a thousand bucks in my pocket, I set out for the holy city of Pushkar.

It was about 9 o’clock when I was walking frantically across the alleys and roadways of Pushkar to find a hostel that would accept cards. The sun already shined so bright as if it wanted me to forget how bitterly cold the night was; trying to bribe me with all the excess warmth. After running around in circles (which I realised later), I finally found it, Zostel – the hostel that accepted cards. And an hour later, I also found out an ATM with a smaller, much smaller queue. Thus, having solved all the crisis of my un-rigorous life, I had a nice brunch and checked in into the hostel.

Pushkar is a quaint little town situated about 420 Kms from Delhi. It can be easily reached via Ajmer which is about 20 Kms away. Although, sometimes, Pushkar boasts of being the only place to host a Brahma Temple but truth be told there are four others too. But, I would certainly give Pushkar the credit of having the most famous Brahma Temple. Also, there is a big lake in the centre of the town, around which most of the temples are built. Besides these, there is a temple called Savitri temple, accessible via a cable car or a short hike, perched on the top of a hill which can be seen from everywhere in Pushkar. Another prime attraction point is a government authorised bhang shop (bhang being a form of marijuana) which certainly boosts the tourism in the town. 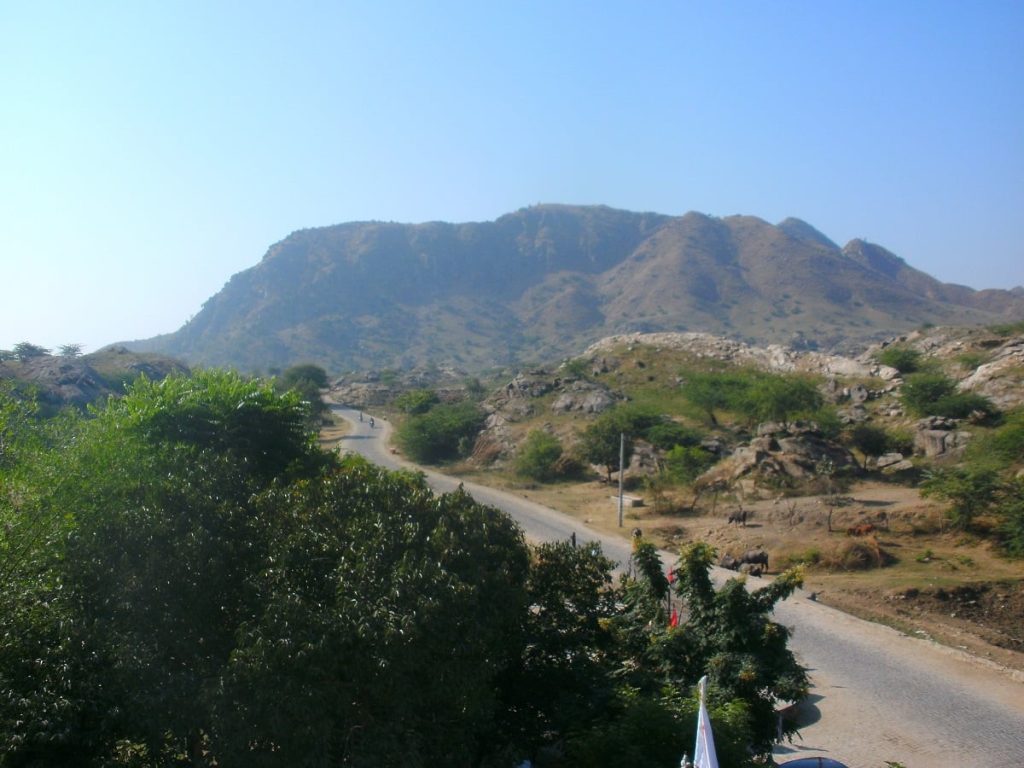 For anybody, like me, uninterested in temple hopping, Pushkar is the perfect place to just do nothing. Taking advantage of the perfect location of the hostel, I reduced all my activities to reading a book in the company of the most silence loving group of people I have ever met; and admiring the serendipitous nature of randomness which allowed for the creation of this beautiful place surrounded by hills.

The comforting warmth of the afternoon sun, like a cozy blanket hugging and smiling at me, brought back innocent childhood memories deep buried beneath the sheaths of growing up. The times, when the crisis of life was to decide which game to play in the evening. A loud explosion from a firecracker brought me back from the daydream abruptly. The fierce sun of the noon too had mellowed down by then and I set out for the lake to watch sunset with my newfound German friend, Lena (with whom I continued my further trip, but that’s later). 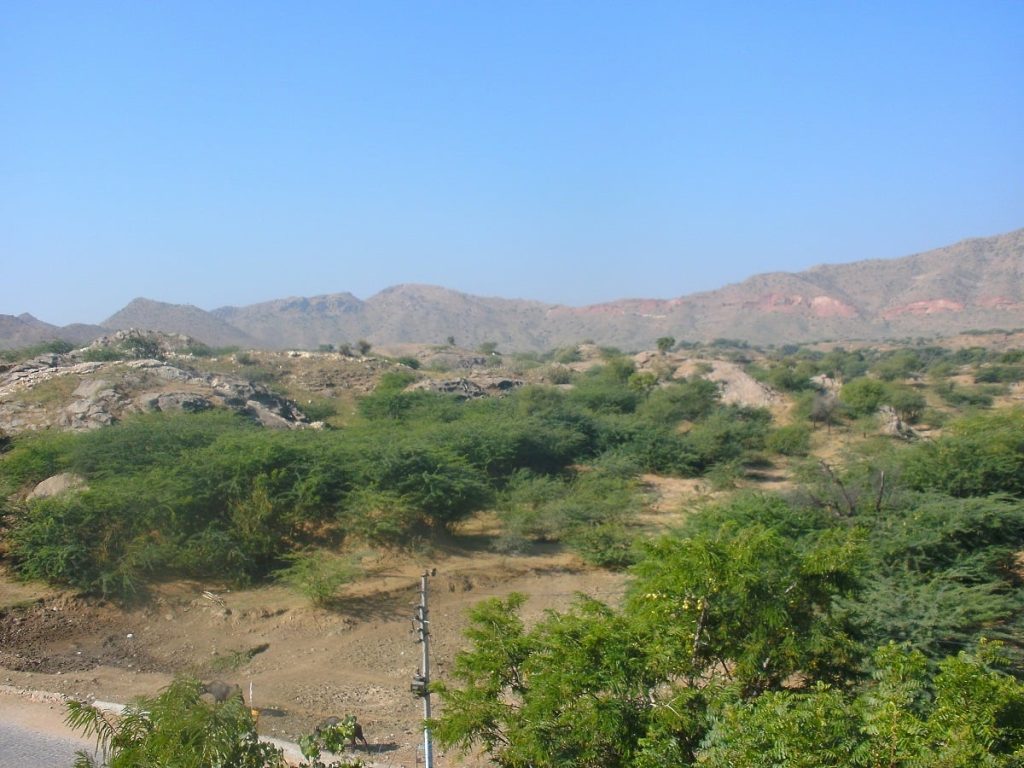 The lake is only a short walk from the hostel and there are stairs leading to the  lake all along it’s perimeter. We walked for some time along the periphery of the lake, before settling down at a secluded spot, opposite the setting sun. In a while, the descending sun slowly sank in the horizon, like a tired farmer going back home after a day of hard work. And the strip of sky lit up ceremoniously in bright orange after it’s departure, which slowly grew red before darkness engulfed the white buildings, the red temples, the blue water, the green hills; and after it had taken everything in it’s embrace, it leaped ahead to consume the bright red horizon.

Chants and prayer from all the surrounding temples filled up the silence; thanking and praising the almighty for everything that he doesn’t do. Then the street lights lit up, bringing the official declaration of the night and sinking in the feeling that I just came one more day closer to the end. The darkness brought with itself – coldness, which seemed to rise in power every passing moment, prompting us to leave the serene lake and head back for the hostel where fire, food, company and comfort awaited. 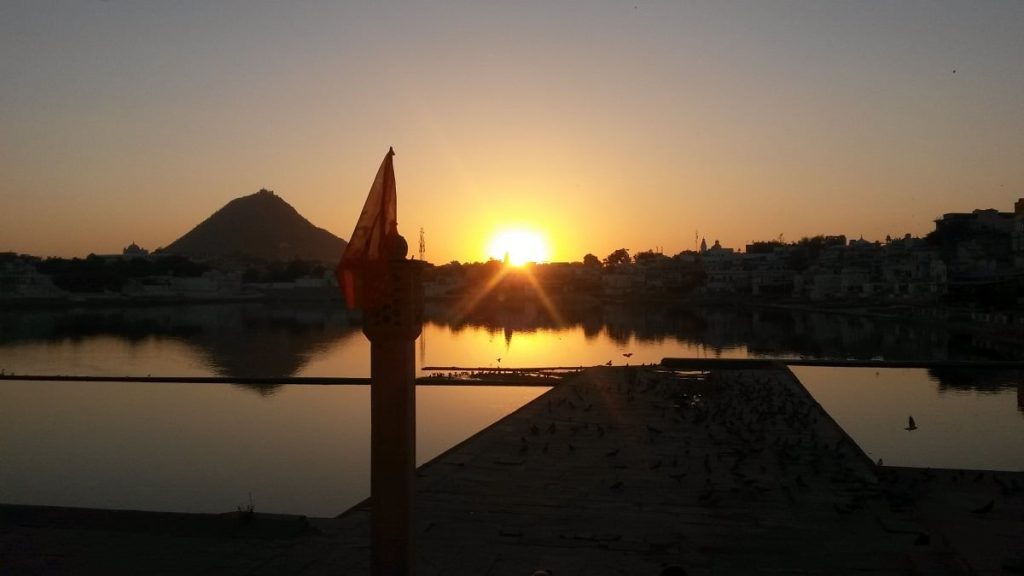 The next day too, I followed the same routine, expect walking down a few times down the streets of Pushkar that lead to the Brahma temple, and are filled with tiny shops selling, trinkets, idols, jewellery, mementos, clothes, sweets, chillums, and everything in between; the kind of shops that nowadays have become ubiquitous at every tourist place.

And later the same evening I bid farewell to Pushkar by boarding on a bus to Jaisalmer.