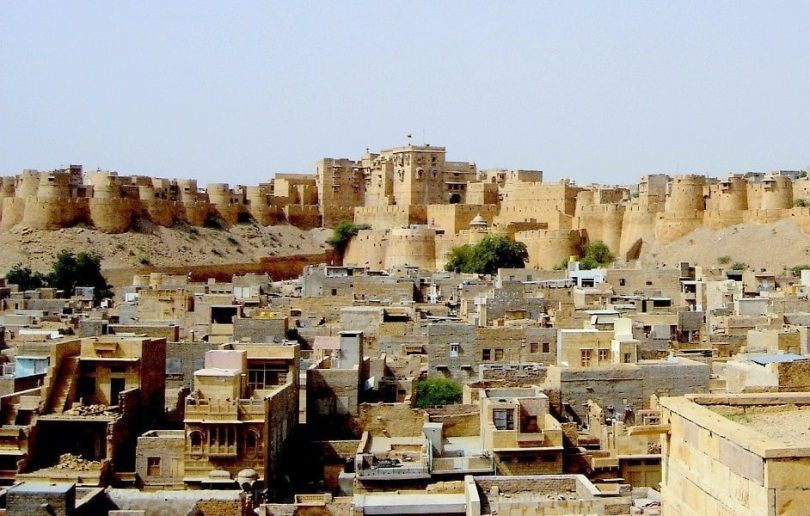 Jaisalmer is also nicknamed “The Golden city”, is a city in the Indian state of Rajasthan, located 575 kilometers west of the state capital Jaipur. Once known as Jaisalmer state it is a World Heritage Site and there are many places to visit in Jaisalmer.

The town stands on a ridge of yellowish sandstone, crowned by a fort, which contains the palace and several ornate Jain temples. Jaisalmer popularly called as the ‘Golden City of India’ gets its name from the yellow sand and the yellow sandstone used in the architecture of the city which provides a golden glow to the city.

Jaisalmer city is named after Maharawal Jaisal Singh, a Rajput king who founded the city in 1156 AD. The ruling dynasty is believed to have descended from the Yadava Prince Lord Krishna.

The best time to visit Jaisalmer is from October to February while the peak season is from December to February. Summers are hot & dry and monsoon & winter offer pleasant weather to enjoy the golden city,

Jaisalmer is also famous for Camping in Sam dunes. You can also do Camel and Jeep Safari in the deserts of Sam which is about 40 km from the main Jaisalmer city.

Jaisalmer Fort is one of the largest fully preserved fortified cities in the world. A World Heritage Site, it was built in 1156 AD by the Rajput ruler Rawal Jaisal, from whom it derives its name.

The fort stands amidst the sandy expanse of the great Thar Desert, on Trikuta Hill. Before the days of the British Raj, the fortress city served as a refuge and way-station for caravans and travelers along the Silk Road.

Its ramparts served as the backdrop for many battles in past centuries when the Silk Road still served as one of the main trade routes between East and West.

Jaisalmer Fort is one of the top 10 best places to visit in Jaisalmer.

Patwon-ki-Haveli is situated in a narrow lane near the Patwa Complex in Jaisalmer. It was the first haveli that was built in Jaisalmer and also one of the top places to visit in Jaisalmer. The Patwon ki Haveli is considered to be one of the largest as well as the finest haveli of Rajasthan.

Gadisar Lake or Gadsisar Lake is an artificial reservoir in Jaisalmer. It was the only source of water for the Jaisalmer city in the olden days and also one of the best Jaisalmer sightseeing places.

The Gadisar Lake was constructed by Raja Rawal Jaisal, the first ruler of Jaisalmer and later reconstructed by Maharawal Gadsi Singh in the year 1367 AD. It is said this rainwater lake once provided water to the entire town.

It is said that once the Haveli of Salim Singh had two additional wooden stories in an attempt to make it as high as the maharaja’s palace but the Maharaja did not take this attempt in good spirit.

Currently, it has only five stories as the upper two tiers were demolished as per the order of the king.

Desert Cultural Centre & Museum is located on the Gadisagar Road in Jaisalmer. It is one of the popular tourist attractions in Jaisalmer.

Various musical instruments and folk dance related costumes can be found in this museum. Costumes of the erstwhile maharajas and maharanis can also found in the museum.

Tazia Tower is located in the Badal Palace complex near Amar Sagar Gate inside Jaisalmer Fort. The intricate designs, minarets, and architectural fusion of this tower make it one of the top Jaisalmer tourist places.

Tazia Tower was constructed in the form of Tazia that is usually part of Muslim religious festivities. It was constructed in 1886 AD by Muslim carvers who presented it as a gift to the imperial Hindu king, Maharawal Berisal Singh.

Jaisalmer has been enriched by its Jain community, which has adorned the city with beautiful temples, notably the temples dedicated to the 16th Tirthankara, Shantinath, and 23rd Tirthankara, Parshvanath. There are seven Jain temples in total that are situated within the Jaisalmer fort built during the 12th and 15th centuries.

Among these temples, the biggest one is The Paraswanath Temple and is most attractive; others being Chandraprabhu temple, Rishabdev temple, Shitalnath Temple, Kunthunath Temple, and Shantinath Temple.

Known for their exquisite work of art and architecture that was predominant in the medieval era the temples are built out of yellow sandstone and have intricate engravings on them.

Jaisalmer boasts some of the oldest libraries of India which contain rarest of the manuscripts and artifacts of Jain tradition. There are many pilgrimage centers around Jaisalmer such as Lodhruva(Lodarva), Amarsagar, Brahmsar, and Pokharan. Jain Temples are definitely one of the top places to visit in Jaisalmer.

Bada Bagh, also called Barabagh is a garden complex about 6 km north of Jaisalmer on way to Ramgarh, and halfway between Jaisalmer and Lodhruva in the state of Rajasthan in India.

It contains a set of royal cenotaphs, or chhatris of Maharajas of Jaisalmer state, starting with Jai Singh II

Lodrawa is a village in Jaisalmer district, Rajasthan, India. It is 15 km to the north-west of Jaisalmer. Lodrawa was the ancient capital of the Bhatti dynasty till 1156 AD, when Rawal Jaisal founded the Jaisalmer state and shifted the capital to Jaisalmer.

Today, it is a popular tourist destination, known for its architectural ruins and surrounding sand dunes.

Apart from that Ludrawa is also famous for the Jain temple dedicated to 23rd Tirthankara, Parshvnath destroyed in 1152 AD when Muhammad Ghori sacked the city but was reconstructed in 1615 by Seth Tharu Shah and further additions were commissioned in 1675 and 1687.

The temples were rebuilt in the late 1970s, are reminders of the city’s former glory. Rishabhanath Temple and Shambhavanath Temple are also major attractions. Other places are the Hinglaj Mata temple, Chamunda Mata temple, and the old temple of Shiva.

Kuldhara is an abandoned village in the Jaisalmer district of Rajasthan, India. Established around the 13th century, it was once a prosperous village inhabited by Paliwal Brahmins.

It was abandoned by the early 19th century for unknown reasons, possibly because of dwindling water supply, or as a local legend claims, because of persecution by the Jaisalmer State’s minister Salim Singh.

Gradually, it acquired a reputation as a haunted site, and the Rajasthan State Government decided to develop it as a tourist spot. It is also one of the best tourist places to visit in Jaisalmer.

So the above list consists of all the top places that you can visit in Jaisalmer. During the winter season, a trip to Jaisalmer can be planned over the weekend from Delhi.