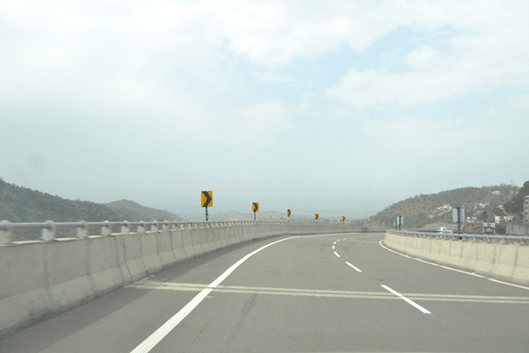 Finally Friday had arrived, a much awaited weekend. It had been a tiring week for me, working daily and all the hustles of living in Gurgaon. I had planned a nice weekend which included sleeping, eating and chilling at home. It was almost 10 pm when my phone rang. It was a call from my old friend asking me whether I would like to accompany him for a weekend rideout.

I was not pretty sure about it because of my plans but when he mentioned it’s going to be a biking trip, my eyes lost all the sleep and without thinking I said, “Yes, count me in”. It had been a while since I had taken the bike for a ride. As per my friend we were to leave at 1  that very night, so I took out my backpack and started packing for the journey.

All the weariness had gone away at the mention of biking trip. I packed the essentials which were less than 5 kg in weight and went outside to the garage. My bike had been sitting there covered in dust for more than a fortnight now. I cleaned all the dust from the bike and then started it. The engine came to life, roaring after a long time. I warmed up the engine and then just waited outside for the time to come when I was supposed to leave.

Right around 1 am my friend came and we greeted each other with a few punches and puns as it had been long since we met. We were going to Shimla which was approximately 450 km from Gurgaon and the ride was around 8 hours. We both jumped on our bikes and headed out for the much awaited journey.

Around 2 am we had crossed the Delhi border which comes after Karnal by Pass. The traffic majorly included logistics trucks and taxis. We both knew it would lead us getting behind on our schedule, so we tried increasing the speed of our bikes and we were weaving in and out of traffic. This went on for a few minutes and suddenly we were asked to pull over by the Traffic police,cops just wanted to inquire whether it was just the two of us or there was a group following us, to which we replied it was just us .

After that we were back on our way to Shimla, which by the way is the capital of Himachal Pradesh. We had a long journey laid ahead of us and it was already close to 3am. The night was dark and with construction work being carried out on the NH-1 we could not speed much. Around 4 am we had reached the famous Dhaba city “Murthal” and planned a stop at Sukhdev for our usual sutta break. After the small break we went on again and this time we were doing somewhere around 130 km/hr. on our bikes. We had to cover a distance of 300 km in around 5 hours. We had decided we won’t take any breaks except for fuel until we reach Zirakhpur which is on the outskirts of Chandigarh. With morning sun ascending on the horizon and the surrounding green fields offered a pleasant ride for both of us. Around 7 am we had reached our second stop or as we were joking second ‘Pit-Stop”. I was having some trouble with the Drive chain of my bike so I was desperate to find a mechanic shop which would be open such early in the morning and after some scouting we came across one. The chain needed lubrication and in 15 minutes we were riding on the Great Himalayan Expressway which connected Chandigarh to Shimla. We had another 90 km left to go and this was another adventure, especially for me because I have never ridden my bike on hilly roads. So I knew it was going to be a challenge for me.

I was scared about riding my bike or for that matter any bike on the mountain roads. I have been to Shimla many times but never felt this kind of anxiety before.

As me and my friend rode on to our destination the weather became a bit warm and we were already feeling a little uncomfortable in our riding gear and helmet. I knew all this will be gone once the mountain breeze hits us and then we will be begging for some warmth. As soon as I had thought about it, a sudden chill went up my body and it felt kind of good while riding. Our spirits were lifted and I also found myself increasing the speed of the bike and pushing on. I wasn’t scared anymore; the change in weather and air quality has taken away my fears. I opened the visor of the helmet and let the chilly wind to gush onto my face.

It felt so good, to feel the cold air, great scenery and a curvy mountain road to ride on, I mean what else does a rider need, it’s all there.

I couldn’t have asked for anything else for a weekend getaway. It was a very good decision to take the bike out for the weekend, I am glad this douche bag of a friend called me to go out with him otherwise I would have gone mad. The mountain roads were a blessing, with it being an early morning and lack of traffic on the curves made the journey a very pleasant one. I wanted to take a stop for taking in the great view and to click some memories of this beautiful trip. We stopped on the outskirts of the Solan city which is almost 40 kms from Shimla. We clicked a few pics and then took off again towards our destination. It was 9:30 am on this beautiful morning and our destination was only 1 hour away from us. We were now both hungry and a little tired from the ride and my plan was to get to a rest house quickly because no matter how much you love riding it still takes a toll on your body when you are riding out for a journey like this.

Yes I will admit it does get tiring riding for over 300 kilometers but that doesn’t mean it’s not worth it. The pleasure of riding out will always be joyful and something which I call my personal Nirvana. With the mile stone telling us we were just 8 kms from our destination we took on a small race for the last few kilometers.  We were both ecstatic and as we removed our helmets and riding gear, our gaze fell upon the sunlight falling on the valley below us and I just could not hold it inside me and I screamed onto the top of my voice. I thought he would slap the hell out of me for making such a noise and foolish act but astonishingly he joined me. And as we screamed, I think we both felt the joy of completing another journey which was both comforting and a bonding time for us.

That’s the main problem these days, people forget about such things in the hustles of daily life. Everyone should find time for a refreshing journey once in a while.

Yeah I know they are very big words, but ask a rider what’s it’s like to take a break and going out and you will get your answer. I can only describe a little of what I felt in this Ride Out but it’s one thing you have to experience yourself to get what I feel.

To all the riders out there, keep riding.