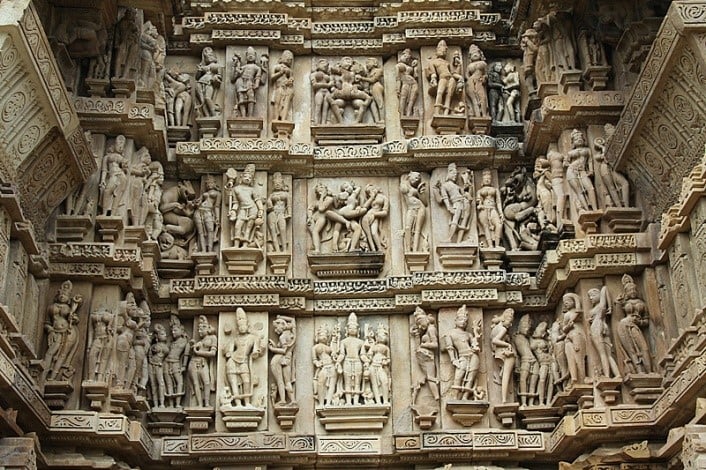 India is often termed as the land of historical monuments due to the existence of numerous worth visiting monuments in the country. These monuments communicate the cultural diversity and rich history of the country is a fascinating and magnificent way. These sites introduce tourists with varied civilizations and art. The experience of exploring the country’s ancient temples as well as architectural ruins rising over teeming cities, streets, and roads leaves one awestruck.

India is a land of huge contrast, it’s a perfect mélange of traditions and modernity that together offers mind-boggling memories that will remain forever. Here’s the list of Top 10 heritage monuments worth visiting in India. Taj Mahal tops the list, one of the Seven Wonders of the World is a must-visit site. It was built by Shah Jahan for his beloved wife and queen of the Mughal Empire ’Mumtaz Mahal’. The palace is exceptionally beautiful; it is difficult to compare its beauty with any other monument or place. The Yamuna River that flows near it adds more charm to the palace.

It is believed that it took around 22 years and nearly 2000 workers to construct this magnificent palace in Agra, Uttar Pradesh. The intricate detailing and carvings engraved on the walls attracts tourists from across the globe and is therefore on top of our list of heritage monuments worth visiting in India.

The complex geometrical patterns incorporated for designing this colossal Palace attracts the attention of historians and archeologists. The main central dome is large and four more domes surround the main dome. There are four tall minarets in the four corners. One of the classic examples of quintessential Mughal architecture is Delhi’s, Humayun Tomb. It is one of the most popular heritage destinations of India. Humayun was the son of the first Mughal Emperor of India. Haji Begum, Humayun’s wife personally looked after the construction of the tomb, which began in 1569.

The tomb stands in the center of a square garden, the causeways separates this Mughal Tomb into four main gardens (charbagh). There are also water-channels in the center. The carving resembles both mogul and Persian decorative elements, the carved stone screens add more beauty to the Humayun Tomb. The mesmerizing Ajanta Ellora Caves are located in Aurangabad, Maharashtra located in Sahyadri hills. The cave was created by skilled artisans back in the 2nd century BC. It is one of the ancient heritage sites of the country. The caves are classic examples of exquisite ancient Indian architecture.

The 34 caves at Ellora were built during the 350 AD to 700 AD period showcasing three religions – Hinduism, Buddhism, and Jainism. The 29 caves at Ajanta were carved during a period from 200 BC to 650 AD and depict the story of Buddhism. The group of monuments at Hampi, Karnataka satiates one’s desire of exploring ancient architecture and relics by exploring them. The several Dravidian temples and palaces in Hampi were constructed during the 14th and 16th centuries and are of vital importance for historians as well as architects. This site was included in the World Heritage Site List in the year 1986.

The visit to Hampi is heavenly and spectacular as tourists get to witness larger than life-size statues of god along with numerous temples. Other wonderful spots of the place are Hazara Rama Temple, Vithala Temple, Singaradu Hebbagilu, Queen’s Bath, Virupaksha Temple, Lotus Mahal, Ugra Narasimha and the ruins of Achuta Raya Temple. Konark represents sun god Surya’s chariot it is situated on the bank of the Bay of Bengal, embracing the rays of the gleaming sun. the temple at. Chariot’s 24 wheels are adorned with beautiful design and intricate carving and it is headed by six horses. The temple was constructed in the 13th century; It is one of India’s most famous Brahman sanctuaries and depicts the joy and the rhythm of Kalinga’s life.

Explore this beautiful spot in Orissa one of the heritage monuments worth visiting in India. The small pattern with marvelous precision in bas relief forms amuses everyone. The temples of Khajuraho were constructed during the Chandella Dynasty. The sheer beauty and architecture of these monuments, made them being included in the UNESCO world heritage site.  The sandstone of various colors is the main element of construction. All the monuments have entrance and hall, fresh air and sunlight can enter from huge windows of the temples. The temple is famous for its Kamasutra carving embracing  Khajuraho’s three groups of temples.

There are 3 regions of Khajuraho western, eastern and southern. In the western part, one finds Kandariya Mahadeo, Matangeshwara Temple, Chitragupta Temple, Vishwanath Temple, and Lakshamana Temple. On the eastern part of Khajuraho, spectacular temples like the Brahma temple, Adinatha Temple, Ghantai Temple, Vamana temple, and Parsavanatha Temple can be spotted. In the southern part,  one can explore the Chaturbhuj Temple. Sanchi is well known for Buddhist monuments honoring Madhya Pradesh. One can explore this oldest Buddhist sanctuary, which was a major Buddhist hub in 12th A.D. The holy center comprises several complex structures of Buddhist legends.

There are several monolithic pillars, monasteries, temples, palaces built in1st, and 2nd centuries A.D. Amongst this plethora of monuments, a world-renowned monument the beautiful and massive dome is the great Stupa constructed by Emperor Asoka is highlighted. Pattadakal is a small town in Karnataka famous for ancient temples. It was the second largest city of the Chalukyas. The temples are constructed in Chalukyan style and reflect the unique form of architecture. It is also included in the World Heritage Site List. Some of the temples famous are Sangamesvara, Malikarjuna, Kailasanatha, Galaganatha temple, etc. The last temple built at Pattadakal was during the reign of Rashtrakuta (9th century A.D.). Mahabalipuram is renowned for rock carvings and monolithic sculptures worldwide. It is included in the UNESCO World Heritage site. Mahabalipuram was a port of the Pallava Empire in the 7th century. The monuments showcase sculptures and carvings that depict artisan’s craftsmanship and creativity

The sculptures are categorized as follows

The lavish temple at shore bordered by Nandi bulls, facing the sea, offering fascinating views is quite famous amongst the visitors. The appeal of Mahabalipuram is famous and worth visiting for its monumental architecture as well as for its glittering sand beach. This magnificent structure was constructed in 1720 by Maharaja Jai Singh II. The Jantar Mantar houses various architectural and astrological instruments attracting interests of astronomers, historians, and architects around the globe.

The astronomical observatory in Jaipur has 14 major geometric devices that help in identifying constellations, detecting time, and for analyzing the orbits around the sun. Famous buildings inside the Jantar Mantar are the ‘Samrat Yantra’ which is the world’s largest sundial, the ‘Hindu Chhatri’, the ‘Jaiprakash Yantra’ and other geometric structures & astronomical devices.

Hope you like our list of 10 Heritage monuments worth visiting in India. Feel free to add how you felt about the place in the comments section.