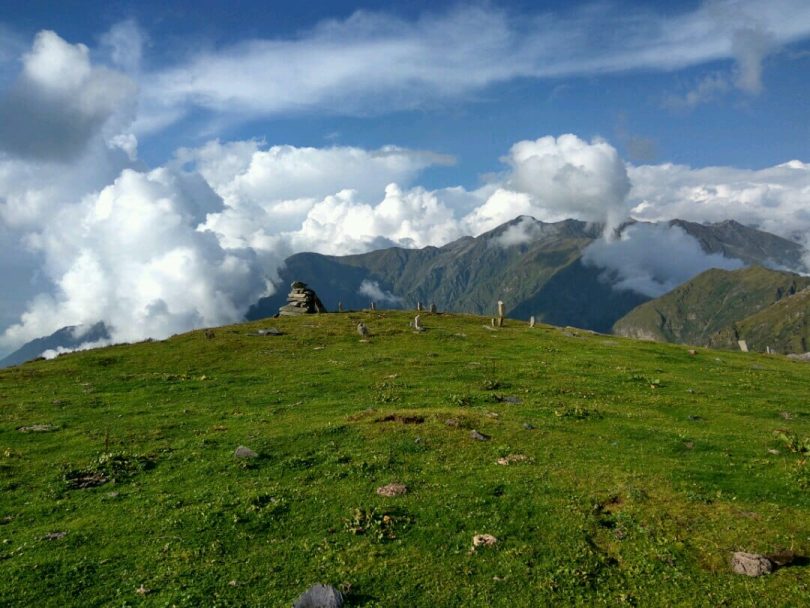 Solo travel is a very poetic idea in itself. There has always been a hint of mysticism shrouding it, propagated by accounts of numerous people who claim to encounter life-changing incidents whilst on their journeys. Driven by curiosity and stimulated by the recent, yet intense feeling of being lost and clueless about my life, I too decided to venture on a trip by myself to seek out answers, if there were any.

But, with only three nights and a measly saving from the scholarship at my disposal, choices were indeed very limited. Utilizing the most powerful tool of our times, the Internet, I came across a website about a quaint little village in Mandi district of Himachal Pradesh, India, called Thachi. The description of the valley seemed tailored for me, almost bringing a smile on my face. It fit my temporal and financial constraints like a perfect glove. The prompt and friendly replies from the contact mentioned in the website only added to my ecstasy.

Come Friday night, and I found myself at Inter State Bus Terminus of Chandigarh,Punjab, located in Sector-43, which acts as a base for buses destined to Himachal Pradesh. Buying tickets for buses enroute Manali from the counter on weekends is a nightmare for any person with even shades of introverted personality. The concept of a queue is yet alien, alienating those who refrain themselves from intense physical contact which sometimes even may result in an unintentional jab or two. I encircled twice the swarm of people hovering the counter and then waited in silence at a distance in an exaggerated hope of a queue or a deserted counter. But it did not take me long to realize that either I have to fight it or lose it. So hesitantly, I too dived in the swarm to emerged triumphantly with a ticket for Mandi and some change barely clutched between my fingers.

It takes about five hours for buses to reach Mandi, which lies approximately 190 Kms from Chandigarh. Upon reaching Mandi in the early morning, as planned, witnessing the first daylight of the morning twilight, I immediately found a bus for Manali which would take me to Aut. Aut is a little town after a long, dark tunnel on the Manali Highway at a distance of 40 Kms from Mandi and takes a trifle more than an hour to reach. The picturesque road slithered along the river Beas which showed mighty signs of a bountiful monsoon, this season, in the Himalayas. I had seen many mornings but none so unusual. The sky seemed to paint everything in a monotone of the brightest orange. The dark green trees, the white boulders, the roaring river beneath, none were spared. It was an absolute visual delight for every awake soul. The bus soon dropped me into the main street of the town which was slowly waking up from its sleep into a beautiful morning. Alighting the bus, I immediately dialed my contact for Thachi as he had told me. A few miscalls later, skeptically, I boarded the first bus to leave for Thachi, thinking he might answer the call while I am on the way.

The bus started, carrying only two passengers inside and soon strayed off the main highway into a narrow road that kept ascending continuously all the way. The surrounding landscape was a sight to behold; of which a vast expanse was covered by apple trees falling under the weight of luscious apples that were just beginning to ripen. There were a few country houses, wooden, with stoned roofs, dotted in between that appeared to have been taken straight out of an illustrated children’s story book. The soft rain added to the beauty as innocence to a child. But soon, the temperature started to drop steeply as the bus ascended further up in the mountains and the downpour started getting heavy. Just then it struck me that I had forgotten to pack my thermal fleece that I had bought specifically for this trip. All the while I also kept calling my contact while the network playfully kept appearing and disappearing at every alternate curve. But sadly, all my calls always gradually evolved into missed calls. The journey which had just started to seem longer than expected came to a sudden halt with the conductor informing that we were in Thachi. I got down the bus, took shelter from the heavy mountain rain in a tiny fruit shop just in front of me and started chatting with the owner. Soon, I came to know there were hardly any possible accommodations in the tiny village. So, after a confirmation of the same by a tea shop owner over a cup of warm yet very sweet tea, and realizing that I am devoid of any rain protective gear and choices, owing to the disappearance of my seemingly faithful contact, I decided to get back to Aut by the same bus with which I came and extend my journey further to Parvati Valley. It was almost noon by the time I reached Kasol, a beautiful backpacker’s hub in Parvati Valley but sadly getting over-saturated with tourists in the recent times. Seeking solitude, I decided to hike to a nearby village called Chalal which is about 2 Kms and takes around 30 minutes to reach. It is a short yet beautiful hike with river Parvati flowing furiously alongside. There are huge boulders in between, along the riverside, on which people lounge, laugh and love sometimes too. The village is dotted with numerous cafes that provide lodging at throwaway prices but have expensive food. Being tired and hungry, I settled down at the very first cafe I inquired in; which seemed juxtaposed between the simple old village architecture with small doors and wooden floors, and the modern EDM music blasting from the speakers. After spending most of the evening staring up at a tree in the front yard whose leaves seemed to dance rhythmically to the slow breeze, and questioning myself about what I was doing there, I decided to have a early dinner which was surprisingly delicious and call it a day. In the solitude of my room, under the pale light of a candle and inside a blanket of eerie silence I tried to think about my life. But the peace was overwhelming, as if my mind was fortified against any thought. I sat there on the bed, smiling to myself for reasons unknown but with a long forgotten warm feeling, seemingly, happiness. Perhaps it were not answers that I was seeking, but happiness. With an empty mind and happy heart, as soon as I closed my eyes, I felt as if I was sinking into a pile of feathery soft cotton like a lover’s cosy embrace.

I woke up early next morning to the tune of my alarm and a cloudy, cold sky. While chatting with the cafe owner the day before, I had found out that there is a small village called Rasol which is a popular hiking destination and takes around 3 hours to reach. As I had woken up feeling extremely refreshed, I immediately decided to hike up to Rasol before it starts raining. So, within 30 minutes of waking up, and after settling my bills I was on my way to Rasol. The hike isn’t difficult but is a constant ascend for most of the part. With only one stopover for a ‘glass’ of tea while chatting with a local guy and save for the few encounters with barren of mules whom everyone has to give way to, it took me a little more than two and a half hours to reach Rasol. The morning breeze definitely helped in making the beautiful hike all the more pleasant. Probing the village for places to stay, I had my first encounter with racism (I think); briefly shook hands with it. As all the cafes looked empty, I thought to stay in the one that appeared to be better than the rest, Dola Cafe, but was promptly denied entry on the premise that there were no single rooms vacant. I further implored him if I could pay for the charge of the double room and stay, he still denied stating there were no rooms unoccupied at the moment. So dejected, I went to one of the cafes nearby, Bhajan Cafe, which was completely empty at the moment and got myself a room. When I returned to Dola Cafe later in the afternoon for some tea, I found the owner gladly accepting single guests of foreign nationalities. The sweet, sweet taste of racism. Like selecting only the chicken with black feathers to kill.

Watching me sitting alone, a group of guys took the initiative, thankfully, to talk to me and invited me to join them. Soon I found out they were to be lawyers from Lucknow and had drove all the way from Delhi themselves. A tiring journey pacified by restlessness of young souls.Our conversation started with an thin stream of introduction and by the late night, when the owner had to tell us to to be quiet (to our dismay), and we had to return to our dark and cold quarters, it had flourished into an sea that encompassed every range of topic and emotions that our minds could fathom. Waking up to an empty mind is a great feeling, its like feeling content with nothing. But soon thoughts seeped in like waves on a deserted shore. Soft blue water, brittle white oysters and dead black seaweed , that lies at the bottom but is occasionally brought to the surface to remind you that it exists. Familiar places & faces begin to feel stranger when you have made up your mind to leave. With a dog as my companion, who had to bear my conversations, I walked, walked and walked, back to where I had begun, Kasol.

On the bus back to Chandigarh, watching those passing trees, the deep gorge, the gushing river, the happy children, the over-enthusiastic ‘tourists’, the intelligent city folk who enjoy nature from their closed boxes, called cars, the old lady who carries weight twice her own, untiringly, and the ubiquitous mountain that overlooks it all; it seemed everything was coming back in place. Maybe it was not about finding answers but finding myself. To find my fear, my weakness, my strength, my spirit. There were times when I could have done better, like confront the cafe owner for not letting me in or stop the lecherous middle aged man in Kasol who took pictures of women without their permission, but then I am not perfect, I never could be. I won’t repeat the same mistakes again, but I may, rather will, knowingly, unknowingly, commit new ones. Life is not about being perfect, its about committing mistakes and learning from them.