Home » Categories » Treks » Best Himalayan Treks to do in December

Best Himalayan treks to do in December

Best Himalayan Treks to do in December are also the the most recommended treks for the winter season. Winter is the perfect time to trek in the Himalayas, as you get to witness the stunning wintry landscapes of the Himalayan range under the white snowy blanket.

Numerous trails remain accessible throughout winter, but the ones that remain open are ideal for upholding the otherworldly beauty of Nature.

Read on to find more about some of the best Himalayan treks that you can do in December. 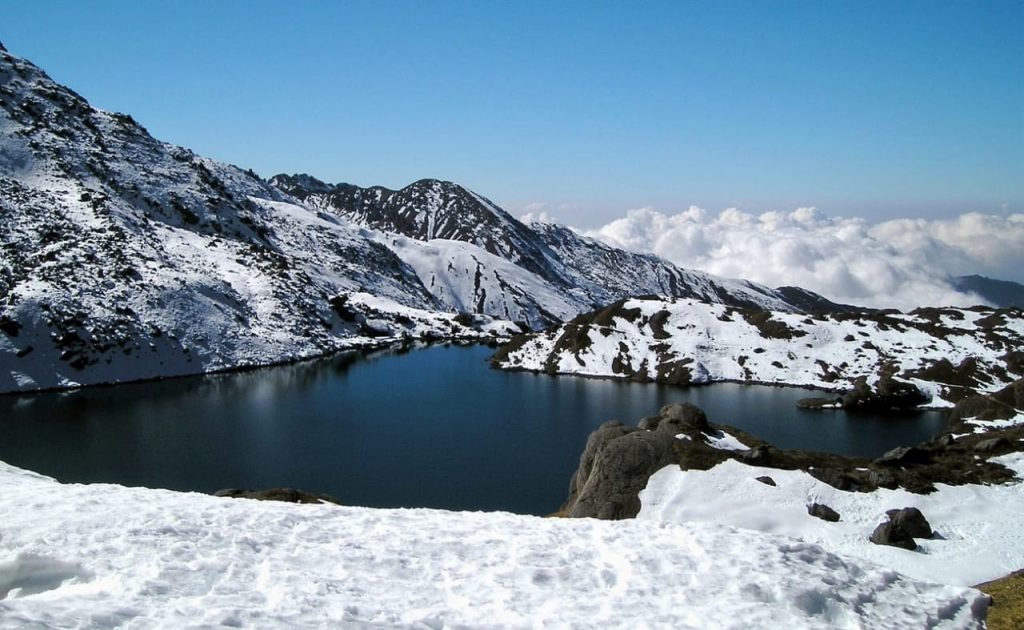 Brahmatal trek is a gorgeous trek in Uttarakhand with the highest elevation reaching almost 12,250 ft. In fact, it has a reputation as an ideal trek to do in December. The trek ends at a lake situated in a crater among the mountains. The ambience of the place is absolutely beautiful in December when the region is covered in snow and the glacial lakes of Brahmatal and Bekaltal look drop-dead gorgeous!

The Brahmatal Trek will take you to jungles which lay covered in snow during winter months of December and January revealing a heavenly feel all over; even the meadows are covered in snow for long stretches.

This trek provides an excellent view of the mighty Himalayan Mountains including Mt. Nanda Ghunti and Mt. Trishul.

Kedarkantha Trek is one of the most popular winter treks in the Himalayas. It is also a highly recommended trek in December and one of the best treks to do in December as the environment, campsites, and views tune in to the colours of winter. It rises to an altitude of 12,500 ft. at the highest point, Kedarkantha Summit.

There are several reasons why you must plan to visit Kedarkantha in December. For instance, the campsites surrounded by huge pine trees amidst wilderness is an experience in itself and there are 360° views on several locations where you also get to camp.

The Kedarkantha summit climb is also completed through a forest which is simply amazing to the core. But it is an easy trek, making it ideal for first timers – it takes you through the Garhwal villages as it is located inside the Govind Wildlife Sanctuary and National Park in Uttarkashi.

Dayara Bugyal Trek is famous for its beautiful meadows amidst mighty Himalayan peaks in Uttarakhand. This, added to the glorious snow cover, makes it one of the best treks to do in December in the Himalayas. The highest point in this trek reaches about 12,000 ft. 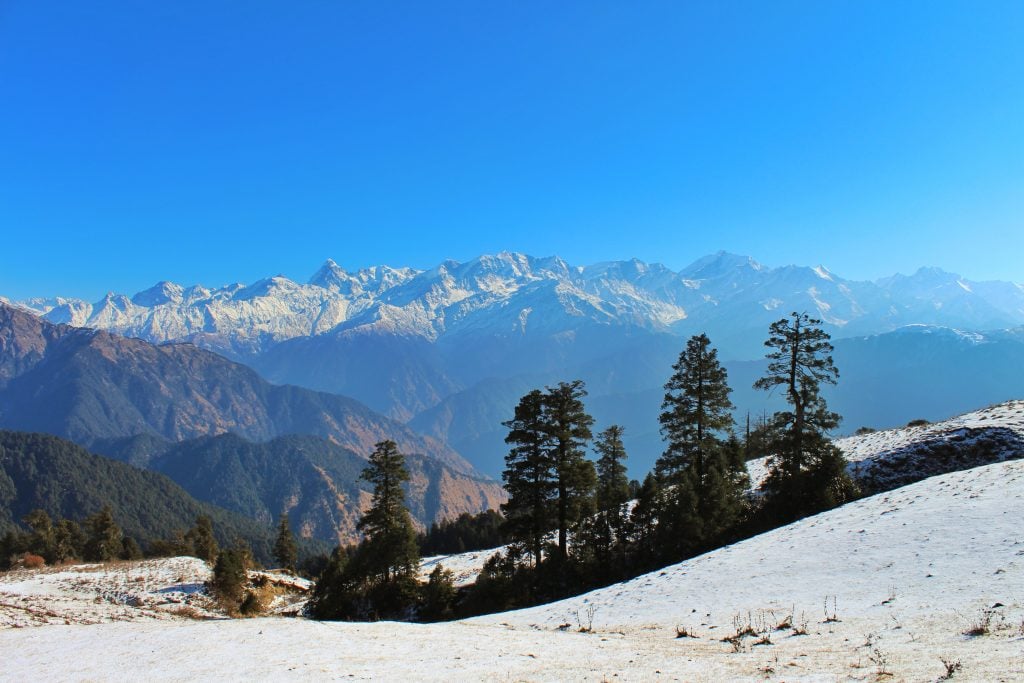 There are a bunch of reasons why you will fall in love with Dayara Bugyal trek. You can cover a beautiful forest trail before you reach the meadows – the trek will make you feel like you are walking on a white sea with gorgeous flowers and mountains around. When you pass the Barnala Lake you can witness famous peaks like Shrikanth, Bandarpoonch, and Gangotri.

Sandakphu Phalut Trek is famous among the trekking community as one of the best winter treks and also one of the best treks to do in December. Located in West Bengal it rises to 11,950 ft. in height, with the spectacular snow-covered trail in December.

Trekking through Sandakphu and Phalut is a wonderful opportunity to soak up the cultural diversity as you pass through Nepalese and Indian lands.

Chopta Chandrashila Trek is one of the top treks in the Himalayas where you get to experience all Himalayas has to offer— mighty peaks, snow-covered trails, forest trails, ancient temples, and a magnificent summit.

Chandrashila summit offers one of the best viewpoints in the Garhwal Himalayas with clear views of Bandarpunj, Chaukhamba, and Kedar Ranges.

It is ideal for beginners to do in December when the entire trail is covered by pristine snow.

Chadar Trek is a unique trek in the country as its trail passes over the frozen Zanskar River in winter. It is one of the most challenging treks as the temperatures could drop as low as -30C. The trek covers a distance of 75 km which mostly traverses over the frozen river.

Chadar trek offers the unique experience of walking over a frozen river, with water flowing beneath the ice. This is something that you will cherish forever, not to mention the culture of Ladakhi villages along the route that will touch your soul.

Kuari pass Trek is also an ideal trek to witness the beauty of winters in the Himalayas. You can plan this trek in December as the trails remain accessible. It starts from Joshimath in Uttarakhand and climaxes at the highest point, the Kuari pass.

It offers excellent views of peaks such as Chaukhamba, Nanda Devi, Dronagiri, Hathi-Ghodi Parvat, and Kamet. The presence of beautiful meadows, rhododendrons forests, alpine forests, and mountain villages along the trail make it worth your every effort.

Khaliya Top Trek is an ideal trek for beginners in winter. It is located near Munsiyari in Uttarakhand. The highest point of the trek is 11,500 ft.

In December, the trails are snow-covered, and the setting makes it an unforgettable experience for the trekkers. There are several animal species you can spot here including the Baral(goat), Monal, and Kakar. There are virgin forests with rhododendron, oaks, pine, and deodar trees that add to the forest trail experience. 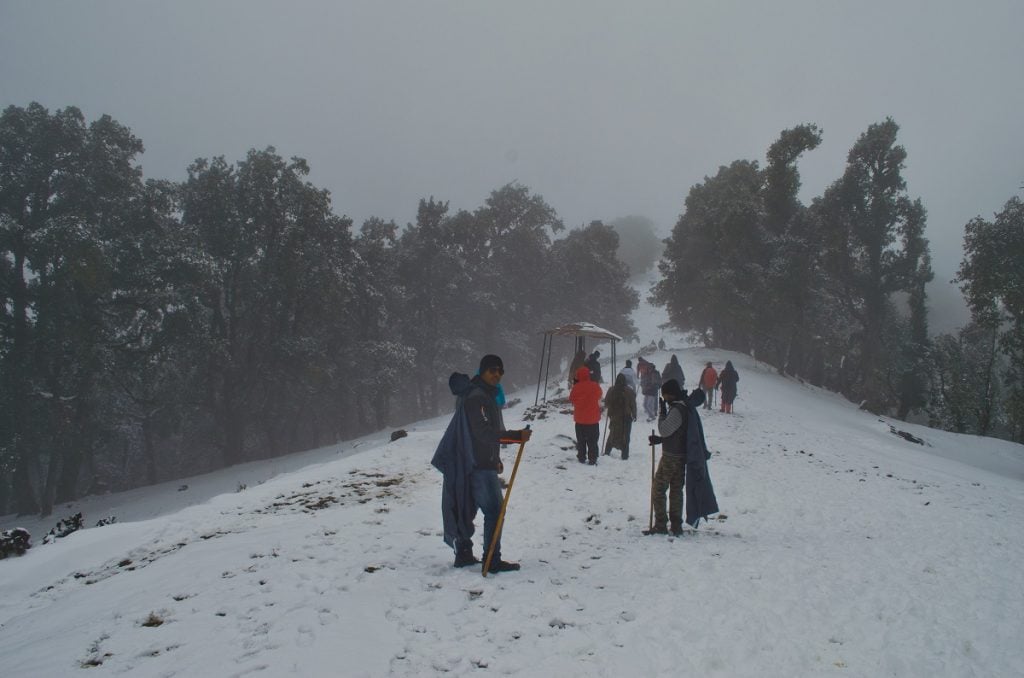 Nag Tibba Trek is a relatively easy trek that can be done over a weekend. It is ideal for beginners to witness the magical world of snow in December. Nag Tibba summit is a sacred spot as the summit is worshipped as the Snake God, where it gets its name. The beginning of the trek is from Pantwari. The trekking trail has a host of attractions that make it a perfect December trek.

You will be mesmerized by the presence of forests along the trail and quaint Himalayan villages like Devalsari, Nagtibba, Pantwari, and Thatyur. The gorgeous views of Nanda Devi and Swargarohini are otherworldly.

December marks the onset of snowfall over most of Himalayas, making it an ideal time for trekkers to experience heaven on earth. You can choose any of the himalayan treks to do in December mentioned above if you are planning some adventure in December.