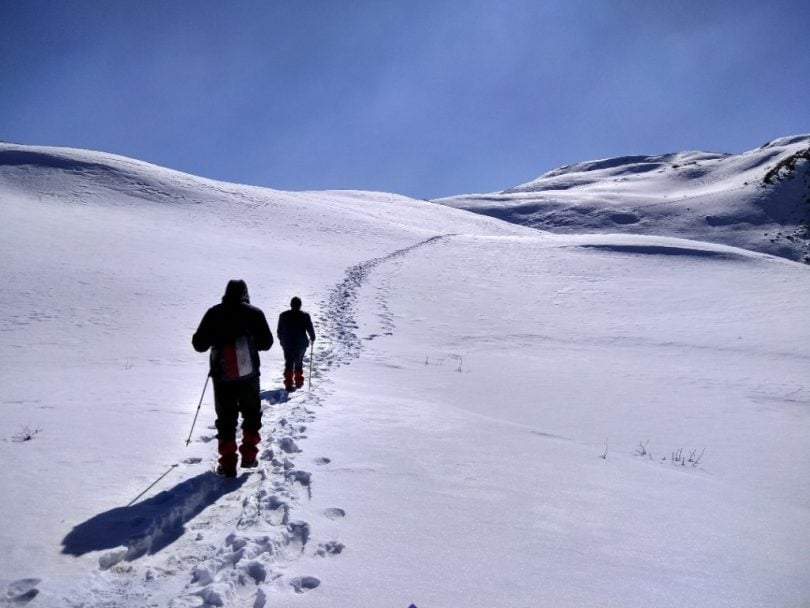 It was a normal day and I was very stressed as I had a final exam the next day. I had hardly prepared for it. But then it only takes a call to set everything straight. I had this opportunity to lead a group of 6 people to Dayara Bugyal trek. Considering my love for The Himalayas, it was a great opportunity for me. I was ready to grab this with both the hands. I knew it was going to be hard as I had to first sit for the exam and then immediately rush back home, prepare for the trek and later leave for Dehradun.

Just 5 minutes before I was so stressed out and was thinking of all the outcomes that could happen in the exam next day and then later using the same pen and notebook I was noting down the list of items required for the trek. I was so excited about this trek that I had almost forgot I had an exam the next day. Anyhow I gave my exam, packed my bags and left for Dehradun.

Dayara Bugyal trek is one of the most underrated treks in India. It lies in the Garhwal region of Uttarakhand. Dayara Bugyal is the biggest meadow in India and undoubtedly is the prettiest too. It covers an area of 28 sq. kilometres. This trek starts from a tiny hamlet called Barsu. Barsu lies 185 kilometres from the state capital, i.e. Dehradun.

I boarded an overnight bus from Chandigarh to Dehradun which dropped me at ISBT Dehradun around 4 a.m.

Day 1: Drive from Dehradun to Barsu.

It was cold in Dehradun and I was waiting for my team which was coming all the way from Delhi. 0nce they all arrived, we had a little introduction session and later we left for Barsu. It was a long drive passing through the beautiful hills of Mussoorie and Uttarkashi. It was a travel day but we utilised it for some local sightseeing at Uttarkashi after having our lunch. We visited the famous Kashi Vishwanath temple and enriched our knowledge about the history of that place. After seeking blessings of God, we continued our journey further. 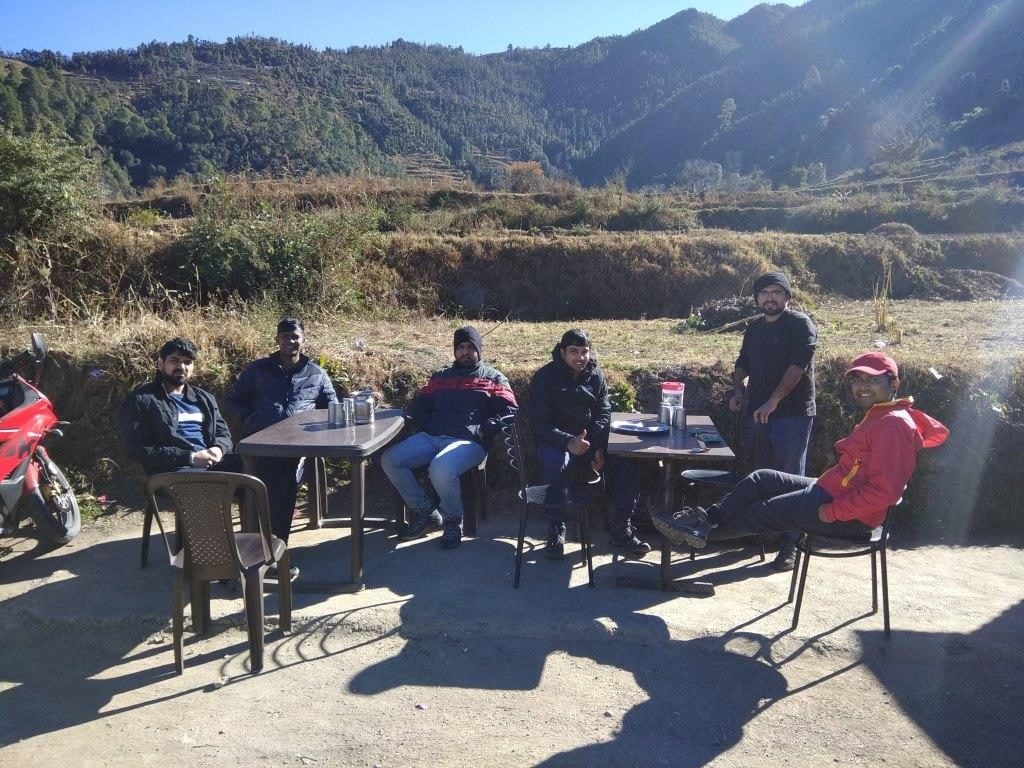 Wravelers having breakfast on their way to Barsu. 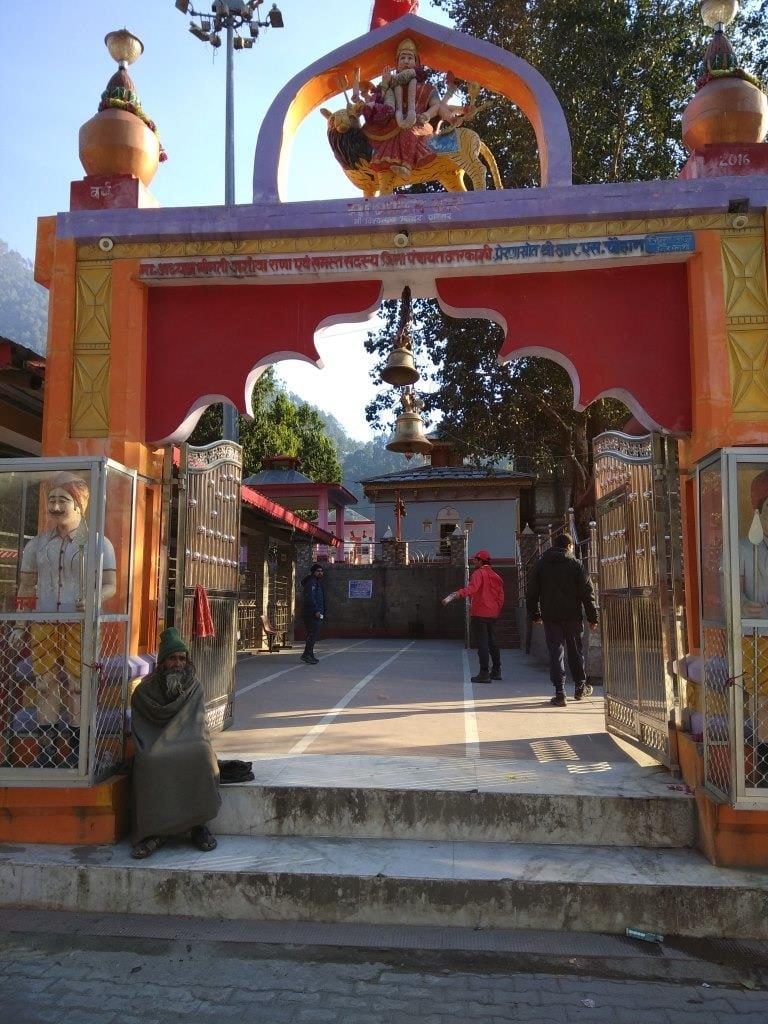 It was almost dusk when we entered the tiny hamlet and as soon as I got down my car I was mesmerized by the beautiful view around the GMVN guest house, where we were going to stay for that night. On one side were the majestic Gangotri ranges and on the other side was the beautiful valley. Snow on the peaks that was shining under the moonlight was a beautiful sight to watch. I was informed by Naveen ji (our trek guide) that there is heavy amount of snow at Dayara, this only excited me more about the next day. We had our dinner and called it for night early.

I woke up to the beautiful view of Gangotri ranges and moved up to the terrace to enjoy this view, to feel the early morning breeze. I could locate some peaks like Shrikanth, DKD-1 and DKD-2 right in front of me. 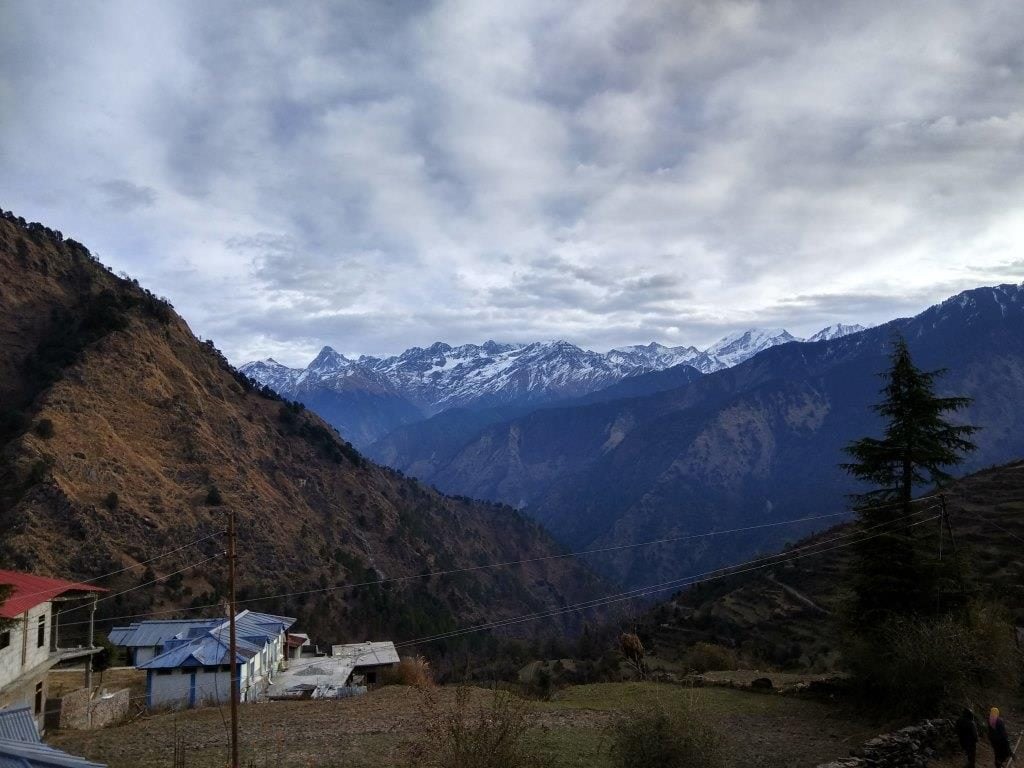 View from my room in Barsu.

We were served delicious aloo paranthas and egg bhurji with tea in our breakfast. After packing our stuff, we started trekking towards Barsu village. Dayara bugyal trek starts from a small lake of Barsu village. As soon as we crossed the lake, we entered into a beautiful forest. The trail was paved and very steep. After about 1 hour of trekking, we were rewarded with little traces of snow and this only motivated us to move further. We kept moving further and suddenly we entered into an open ground, i.e. Barnala which was our campsite of the day. It took us around 4 hours to reach Barnala campsite. 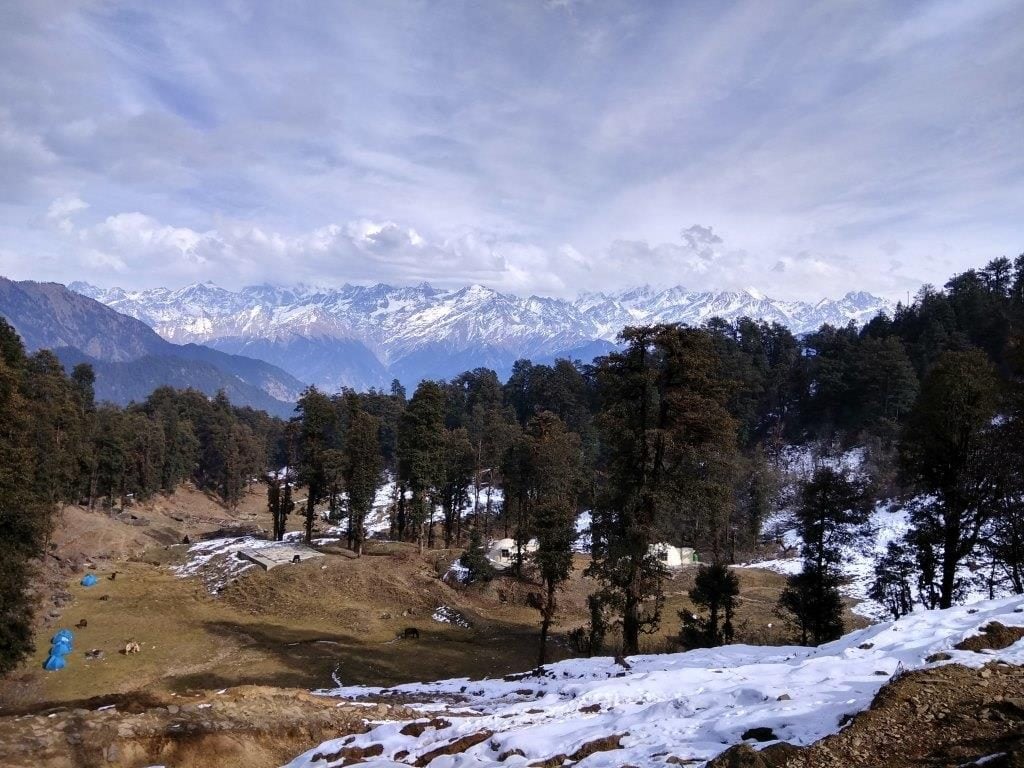 Barnala campsite looked amazing as the view of the Gangotri ranges only got better and there was a snow covered hill right in front of us which we could see from it’s base itself. We were served with tea and lunch. After resting for some time, we hiked up till Barnala tal (tal means lake). Initial 5 minutes were all about moving on a slippery trail, but then the forest again opened to the beautiful snow covered meadows. We reached the lake within 30 minutes and clicked some pictures and later descended back to the campsite to experience the beautiful sunset. The temperature dropped below zero and it was freezing cold out there. But it was Christmas’s eve and we had some plannings for the same. 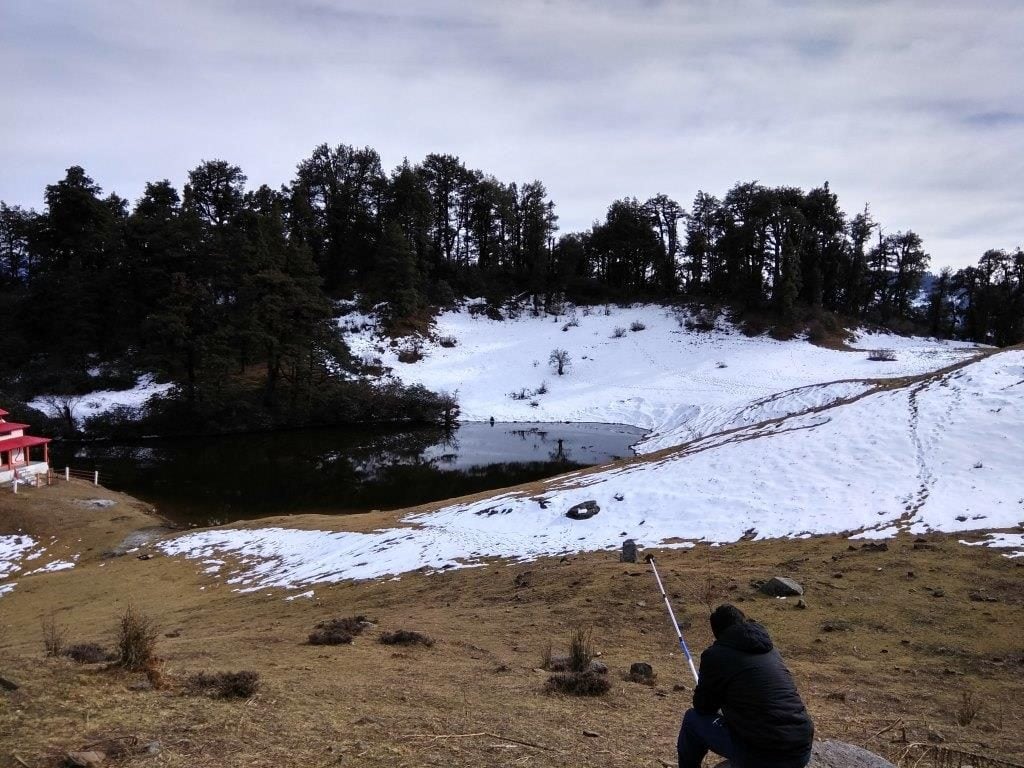 We had our dinner and also were served with delicious Gulab Jamuns. Now having Gulab Jamuns at almost 10,000 ft felt amazing. After dinner we all sat around the bonfire and had an amazing night dancing on the Garhwali and Punjabi songs. It was also a birthday of one of the wraveler, so we had the cake cutting ceremony (obviously a dry cake). Later everyone moved into their camps and had a good sound sleep after a tiring day.

It was very cold when I woke up at 7 a.m. I moved out of my camp and first thing I looked out for was tea and our support team were generous enough to provide us with tea early morning. After having tea, I walked around the campsite to enjoy the chilly weather. Later we all geared up for the trek and summit climb. We put on our gaiters which would protect our shoes from snow, entering into them.

After having our breakfast we started towards the Barnala tal. The lake was frozen and it looked quite different than what we had seen the previous day. Now this is the thing about the mountains, every day you get to experience new things at the same place. Sceneries changes very fast with the change in weather.

We then started hiking towards Dayara campsite. It was a normal ascent through the forest. We were continuously walking on the snow. I was told by Naveen Ji that Banderpooch peak is clearly visible from Dayara campsite and I was very excited to see the peak with my own eyes. The forest again opened to the big meadows and here we were at the Dayara campsite with Banderpooch peak right in front of me. We all sat there for sometime to enjoy the beautiful view and to rest before the summit climb. We clicked few pictures and started our trek towards Bakaria top. 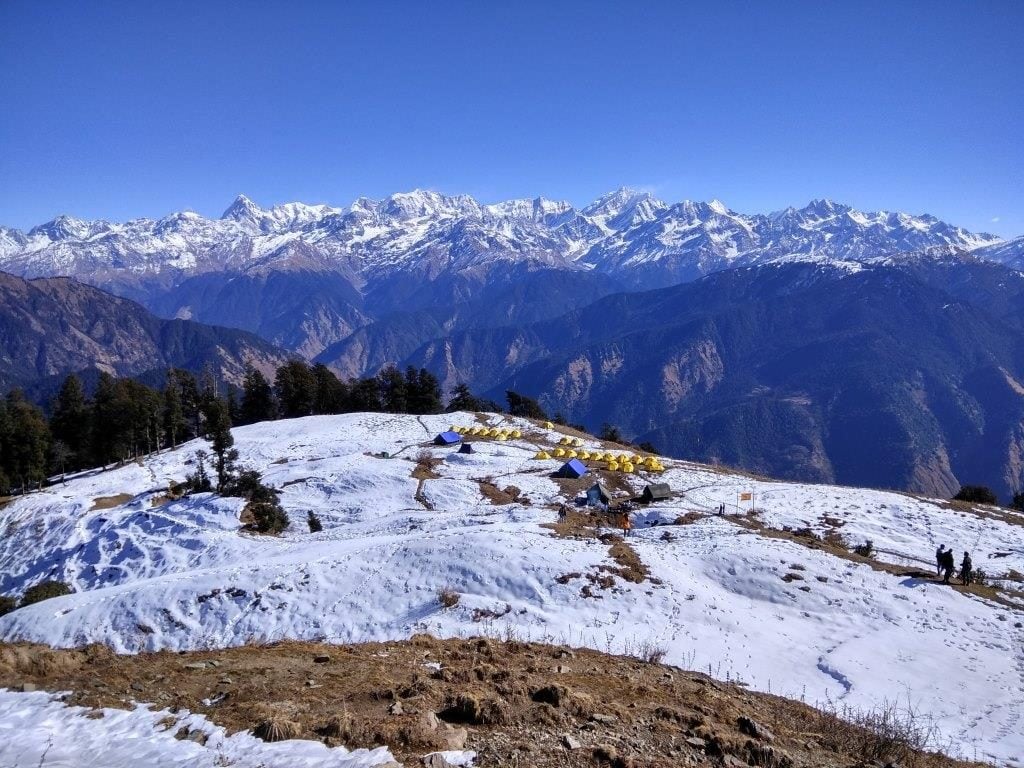 Only after 5 minutes the meadows opened up and all I could see was snow all around. It felt magical while climbing those beautiful meadows. We were already out of water but everyone was determined to make it to the top. The meadows were never-ending and so was their beauty. The level of snow increased as we moved further, which made it even more difficult to climb. Soon after an hour we reached a point where we could see the ridge and from there we made it to the Bakaria top within 30 minutes. 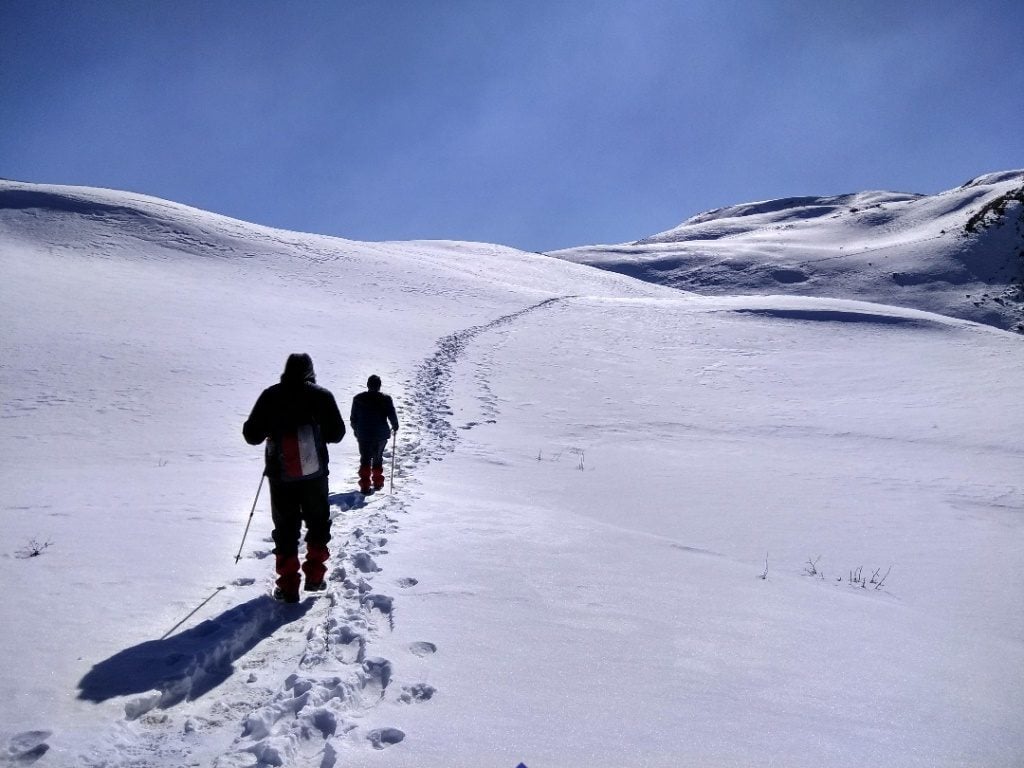 It felt magical and we were all in smiles. For a moment I was dumbstruck as I had the bird’s eye view of the biggest meadow of India. Dayara bugyal was entirely covered with snow and it looked mesmerizing from the top. I could see the Gangotri ranges right in front of me and they looked even more amazing.

Panoramic view of the top.

After spending around half an hour at the top, we starting descending down. Descending down from the top was real fun. I was literally running across the mountains as there was soft snow all around. We reached the Dayara campsite within an hour and were served with the packed lunch and hot tea.

We then started our trek towards our campsite. Although I was descending down but my heart was lost somewhere between the meadows of Dayara. It took us around 45 minutes to reach the campsite. I moved to my camp to change.

We were then served with hot soup and maggi, followed by the dinner. The night was amazing. We all sat around the bonfire and discussed about how amazing day everyone had before retiring to the camps.

Day 4: Trek from Barnala Tal to Barsu and drive back to Dehradun.

We woke up around 8 a.m. It was another cold day at the campsite. After having our breakfast, we starting descending towards Barsu.

We reached Barsu around 11 a.m., got refreshed and left for Dehradun.

It was a long journey ahead before reaching Dehradun. Everyone bid goodbyes to each other after having an amazing trek to Dayara bugyal.

Trek to Dayara bugyal was not only a trek but it was a feeling.

A feeling of experiencing :

And last but not the least it was a feeling of experiencing the bird’s eye view of entire Dayara bugyal.