Bhimbetka, a few kms south of Bhopal is a quite less Googled UNESCO world heritage site and one of the most remarkable assets of Indian Tourism. Neither was I fully aware of such a place of archaeological abundance other than the famous Ajanta & Elora, nor did I plan any itinerary for the trip to Bhimbetka rock shelters. It happens to be a sheer amount of good luck that after attending a wedding invite in Bhopal we could witness the reminiscence of civilization that thrived there hundreds of years back.  Nevertheless, one can also access this place from Gwalior or Jhansi by road.

So this exquisite expedition was suggested by an elderly relative over an evening tea discussion at the event. He was a man of full information and elaborated that Bhimbetka’s rock shelters exhibits habitation of paleolithic period onward, to the early Medieval Ages in India.

This archaeological hot-spot was first identified in sometime between 1957- 58 by Dr. Vishnu Wakankar, who was a renowned archaeologist from Vikram University of Ujjain. Excavation continued over the years to follow and in due course yielded more than 700 rock shelters, of which 400 are antique artwork.

Being avid travel enthusiasts, among all the briefings and mythological linkage what stuck our attention was the fact that this site was only about an hour’s drive from the wedding venue. I hastily decided that the illustration of the earliest human lifestyle in India must not be left out unexplored, especially now that we’re already so close to it. Sooner the said than done; as soon as I proposed what was swirling in my mind ever since I heard of this place, friends approved of it in unison and we were to drive to rock shelters the next day noon. We’ll return by sunset anyway and the reception party will start later in the evening, so a quick escape for few hours can be managed, perhaps our absence will not even be noticed during the busy pre-nuptials.

As decided around 11:00 we hopped on and were en route to Bhimbetka city. The location is lovely,  as the brown terrain of Satpura range’s craggy cliff become visible from within the dense cascade of Teak and Sal trees that contributed to the greenery on the canvas. As the rocks standing tall on either side pass through it pumps up our expectation of having yet another escapade, needless to mention the ride becomes more bumpy to add to the adventure effect.

Oh! None of us had the time to have a look at the pictures on internet; I doubt if we would have ventured, it wouldn’t have felt so captivated by what we behold that day. 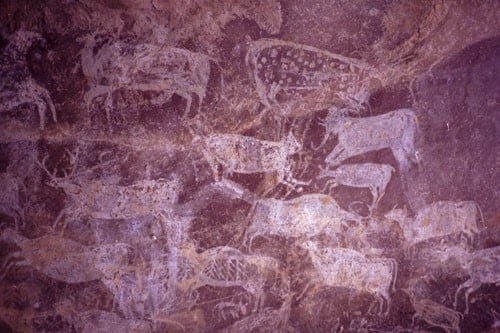 We were simply awestruck! The gimps into the Stone Age through pictographs carved beautifully on the walls of the cave seemed no less than a Nat-Geo programme on ancient civilizations. Spread over 10 km in length, these rock carvings are the second in line among the oldest cave artwork livelihoods from around the world. 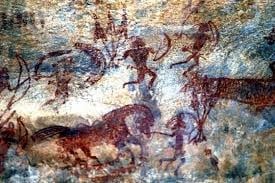 This leap to 9000 years back in time, and it just cost 10 bucks a person; ride and stay will cost another 1.5 to 2 grands maybe; but the time spent among one of the planet’s very first livelihood in a primitive environment of rock carved cave is one of the best experiences that little money can buy. So anytime soon you pay a visit to the cities in close vicinity to Bhimbetka, you must see the rock shelter; it is our glorious past that paved way to the immediate world as we know it today.