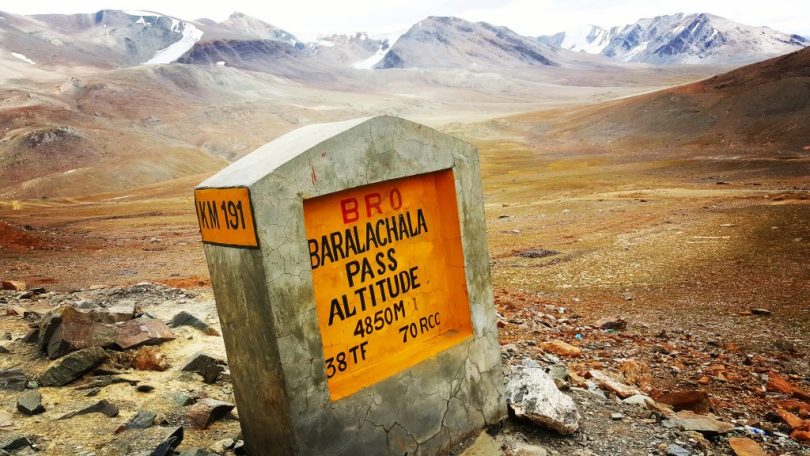 Ladakh is the ’land of High Passes’. There might not be one Indian traveller, for whom visiting Ladakh is not a dream. One of the most popular locations of Northern India, it is there patiently biding its time in every traveller’s bucket list. Today, we bring the scary story of Ladakh, that not many have heard before.

Made of vast stretches of barren land, foliage deprived high mountains, pristine blue lakes, snow capped peaks in the distance, and beautiful Buddhist monasteries, gently dissipating calmness into the air, Ladakh entices like none other.

But the surreal beauty of Ladakh also holds a scary local legend, bone-chilling to the core.

So, grab your blanket, slip under the covers and start reading.

The Cannibal Of Baralacha La

Ladakh is characterised by a number of high-altitude passes, not accessible to the general public, and also because the terrain poses many challenges of varying difficulties.

One such pass, Baralacha La, located in the Zanskar range, at 16,040 ft. Among one of the most dangerous high-altitude passes in the world. It is always covered under feets of snow.

It is precisely here that this scary story of Ladakh of Ladakh took place.

According to locals, years ago, there was a fully functional army post at Baralacha La Pass. It is now known as ‘Shahid Sainik Bhavan’, owing to the tragic events that conspired here.

In a cold winter season, many many years ago, three soldiers of the Indian Army were posted at the Baralacha La Pass, army post.

This was during the frigid months of January and February, when the weather turned unforgivable. It was only the fierce warrior spirit of a soldier that could survive such harsh weather conditions.

That particular year, snowfall in the region broke all records. The three soldiers posted at the Baralacha La army post were stranded, with limited rations for 2 whole months. They were fighting to stay alive.

With the radio signals down, it was impossible for the authorities stationed below to contact the soldiers.

Grab Your Blankets! Read On!

The weather cleared for a bit in March, when the BRO (Border Roads Association)team went out in search of the stranded soldiers. When they reached the army post, the rescue team was shocked to their core.

There was a ragged man with his head lowered over something. He seemed to be digging, and stuffing his mouth with it. Two of the members of the team tiptoed towards him. They saw that it was the dead remains of a human body.

As soon as the man saw the rescue team, he ran towards them with a knife to attack. There was a wild look in his eyes. Before he could do any damage, one of the team members shot him dead on the spot.

The rescue team made inquiries about the deceased human in the nearby villages, but, unfortunately, no one was able to identify him.

What baffled the authorities was that, on further inspection of the site, they saw that all rations intended for use by the three soldiers were intact.

Did the ragged man take down the three army personnel alone?

Was it the remains of one of the soldiers that the cannibalistic man was having? Was he just a normal human being? Or was he possessed by something outworldly or sinister?

After a Few Years

There was no talk of this incident for a few years. But few years later once again strained whispers started doing the rounds.

The soldiers patrolling the pass reported hearing some strange noises and growls. It was like a wild animal. But, there was no way that a wild animal could survive such extreme weather conditions.

Cries of soldiers, and a man running around with a knife were also reported to the patrolling soldiers by villagers. Some search operations were carried out, but nothing came to light.

Is it true then that troubled spirits do not rest and keep manifesting time and again?

No one will ever know the truth, who the man was, and what happened to the poor soldiers in that harsh cold winter. All we know is that, the soldiers lost their lives on duty and the army post they were stationed on is now called the, ‘Shahid Smarak Bhavan’.

Do you believe this scary story of Ladakh?

Have you ever experienced or heard of something supernatural while on a trip?

Do tell us in the comments section below.