Gir National Park and Wildlife Sanctuary is located in Junagadh district of Gujarat, India. The dry and deciduous forest of Sasan Gir is the only place in India where one will find the majestic Asiatic Lions moving freely in the wild. Inside the forest one can spot the king of the jungle moving freely in their territory. Keep reading on to experience the thrilling atmosphere of Sasan Gir and my experience inside the jungle.

Apart from Africa, Gir is the only place to spot wild lions in their natural habitat consisting of everything from massive crocodiles to tiny birds. 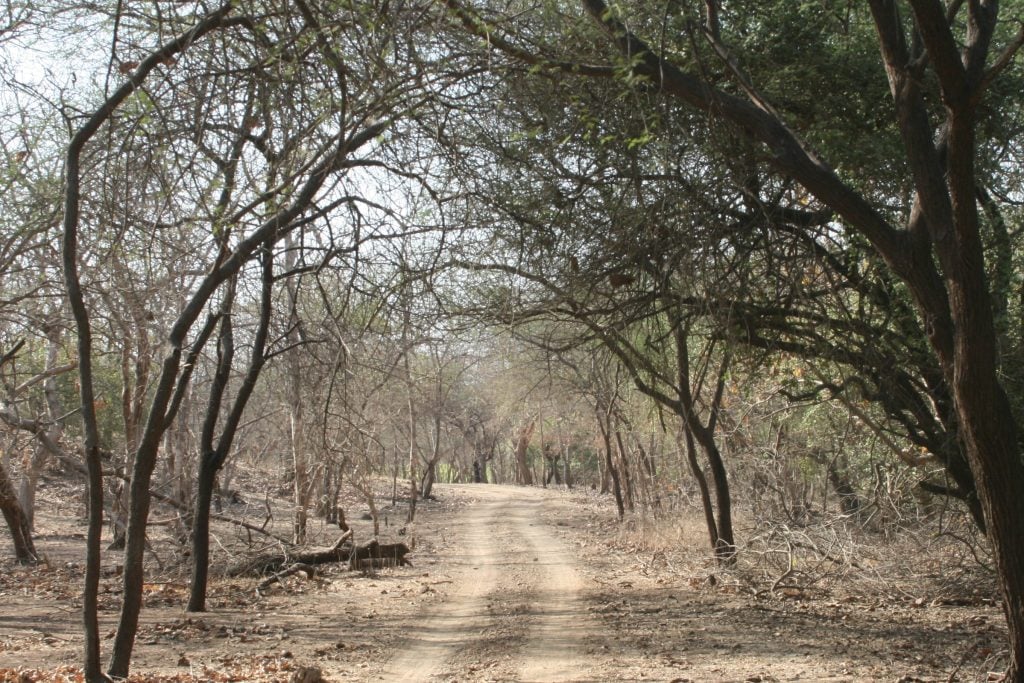 One can travel by rail to Junagadh from and then take a 65 km road trip on bus or taxi to Sasan Gir. The main centre is at Sasan Gir and has a forest guest house maintained by the park, just opposite the railway station.

Devaliya Park is also known as Gir Interpretation Zone. This park is a chain fenced area and is also called ‘mini version of Gir’. It gives the viewers an idea of Gir in a short tour and at much cheaper rates. Also, it is said that the sick and elderly lions reside in this park as they are unable to hunt for themselves and the park staff takes proper care of them. One can spot here Asiatic Lions, Leopards, Sambhar, Black buck, jackal etc. and also some rare bird species like vultures are common in Devaliya. The Devaliya Park is open throughout the year except for Wednesdays.

The Kankai Mata temple is located in the heart of Gir forest. One can reach Kankai in their own private car by taking permission. The journey to Kankai is very thrilling as it gives an experience of driving inside a jungle where lions hunt and roam freely. One can expect spotting a lion or leopard on the way. Deers, Sambhar, Blue bull can be seen grazing on the way to Kankai. Many people have witnessed lions drinking water from the river situated near Kankai. Apart from that listening to a roaring lion is quite a common experience in the area.

The main attraction of Gir is the Jungle safari. Heart pumping and full of adventure, Gir Safari Tour offers a pretty clear glance about the unmatched wilderness amid the home of so many rare wild animals like Asiatic lions and Ass and ensures a distinctive combination of unparalleled joy, actions and fun to each visitor. You can easily watch stunning flora and fauna and uncommon wild animals together over the spectacular alleys of Gir National Park. The Gir national Park is open from mid-October onwards till mid-June.

Safari in Gir National Park offers only one option of jeep safari. There is no canter safari or elephant safari unlike to the other national parks of India. While you are on Jeep Safari, you can spot the Lions in their natural habitat, when they are on the prowl. Personal vehicles and cars are not allowed in the jungle. The Forest Department provides an open jeep which has a capacity of accommodating 6 people and 1 child. Watching the lions from open-roof jeep is altogether a wonderful experience. During your Jeep Safari tour, you can also click some pictures of the Lions. Best time to spot the Lions is at the dusk and dawn. Trained jeep drivers and guides are made available by the Forest Department. It is advisable to book your safari ride beforehand in order to avoid the last minute rush. 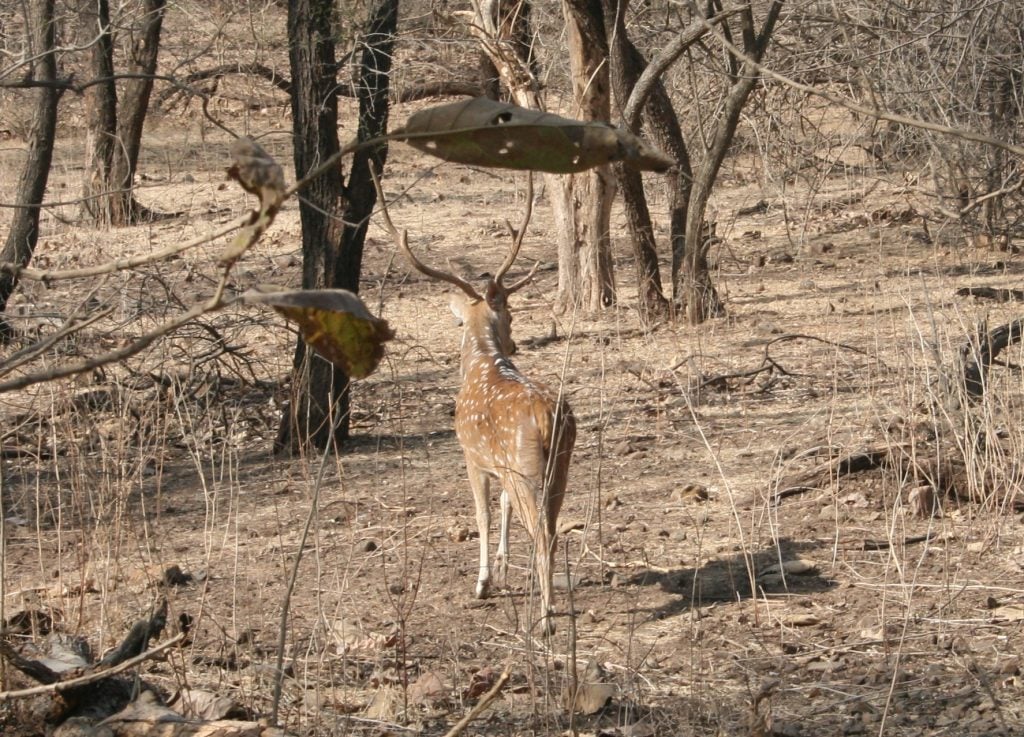 Once inside the jungle, the gypsy driver and the guide take you through various paths inside the forest as they search for any traces of lions in that particular area. On the way one can experience the rare flora and fauna. The environment inside the jungle is very peaceful. People are not allowed to make noises as it might scare the birds and animals. Also, inside the forest the visitors should be aware that they are in the ‘King of the Jungle-Lion’s’ territory and any misbehaviour might provoke the mighty king. The visitors are not allowed to step down from the jeep inside the jungle. The skilled guides track every possible clue of spotting a lion, be it their paw marks to their water drinking place. One can hear a lion’s roar or witness a lioness hiding in the buses in an attempt to protect her cubs from the visitors in the forest.

Inside the jungle one can also spot some Negro and local Maldhari families living in harmony with the King of the Jungle. Yes, sometimes the lions do trouble them by hunting on their cattle, but most of the times the lions do not pose a threat to them. The gypsy driver and the guide put in all their efforts in order to show the visitor a glance of the ‘Royal Asiatic Lion’.

After spending the whole afternoon wandering deep into the jungle, struggling hard to have a glimpse of the King, the sun was about to set and it was time for us to leave the premises in a disappointed state, convinced that it wasn’t our day.  But just as we were approaching the exit, the driver stopped the jeep suddenly and what lay in front of us were two lionesses and two cubs, resting in an open ground. No words can describe the breath-taking sight. All the toil and tiredness of roaming in the sun in search of the lions vanished all of a sudden and a flow of adrenaline rushed inside our bodies. The sight was beautiful, the lionesses resting from a long tiring day, and the curious little cubs trying to interpret the creatures opposite to them as if asking us why are you here and what is that black thing in your hand that is flashing light on us? And then it was our time to bid adieu to the cubs and their mothers. The curious eyes of the cubs traced us all the way until we went out of their sight. 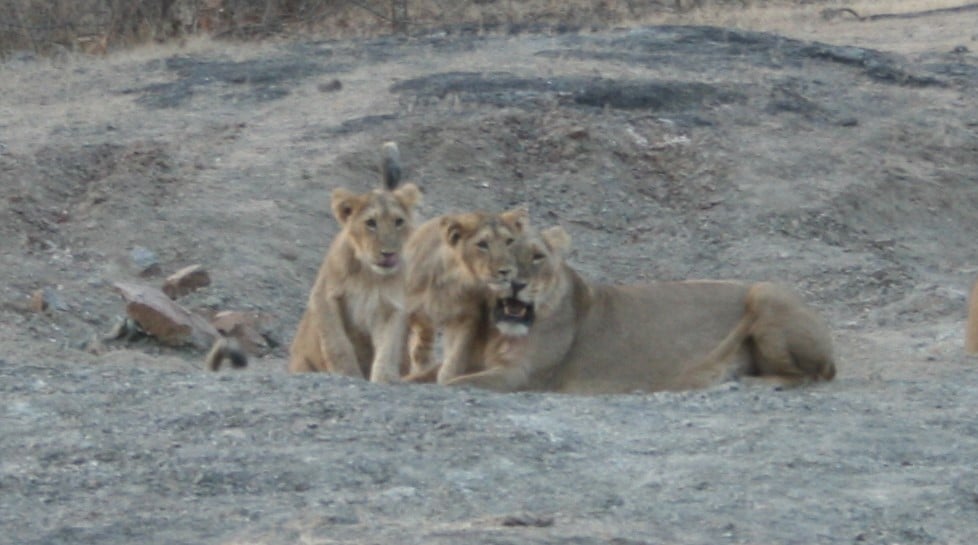 Alike my story, every visitor of Gir would have a different and thrilling experience to share. Feel free to share your experience at Gir with us and if you haven’t yet visited Gir then contact Justwravel right away and allow us to plan your thrilling date with the King of the Jungle!