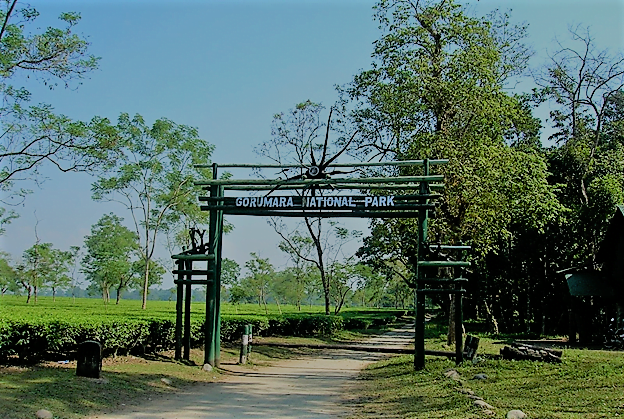 An adventure enthusiast can relate to the sense of euphoria when they hear the word “wilderness”. Down the foothills of the great Himalayas, only 80 km off north-east lies a long and wide stretch of green wilderness  – the kind that can arouse the deepest and most serene of contentment a soul may seek.

The low grasslands and deep dense forest live and breadth side by side like an angel and demon creating a formidable contrast. From November to March is the ideal time to visit the park as the forest divulge its real colours in this period of time. I managed my extended weekend around the Republic Day holiday – my first trip of 2018 – to spend the leisure time amidst nature’s exuberating appeal. 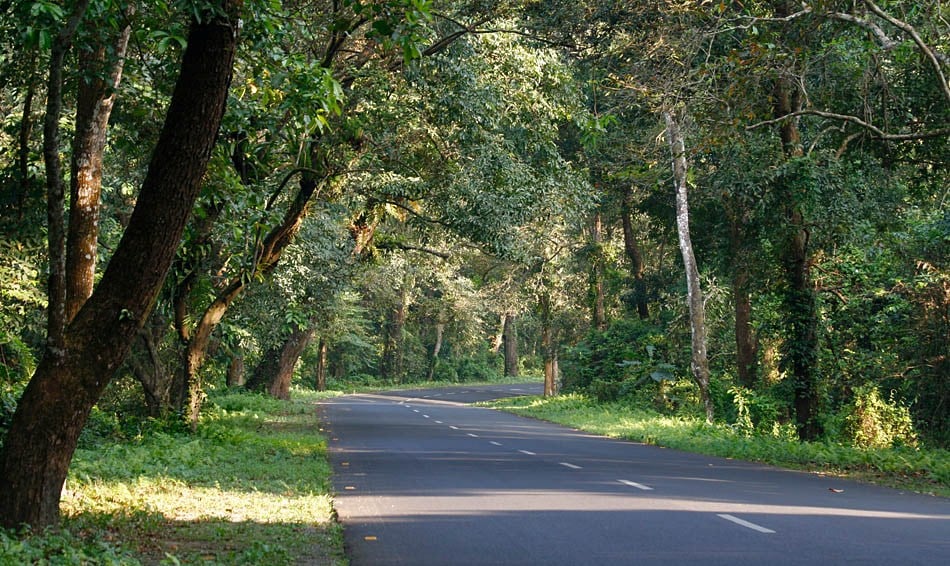 The moment I heard about the trip, I did not think twice to confirm that I’m up for it. Though Maynaguri Railway Station is the closest (28 km approx.) and perhaps with a more picturesque trail, there are fewer trains to that destination, which makes NJP the better choice. In my case, I booked a tourist car from New Jalpaiguri (NJP)  junction station (55 km approx.) to Lataguri – marks the onset of the vast wilderness. Also, the forest resort I’m supposed to stay at is located in Lataguri within the lesser dense stretch of the forest. If you’re in the mood to taste the very minimalist travel style of a wanderlust, buses are also available from both NJP and Maynaguri to reach the Lataguri forest.  Bagdogra airport is the destination if you’re willing to flying to the dauntless forest expedition.

The scenic beauty is inexplicable! 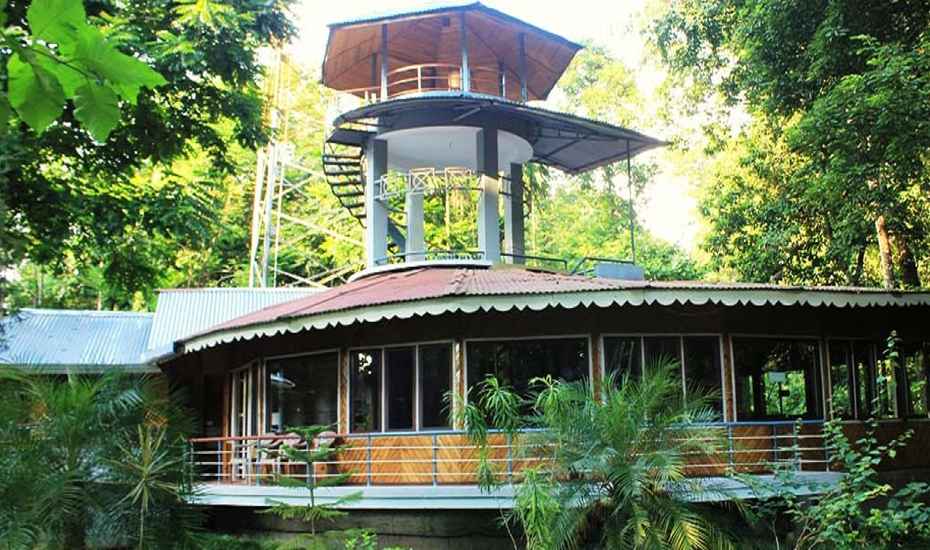 We stationed at one of the exotic and super comfy jungle resort. The cottages pretty much accentuated the essence of the jungle… imitating the life of some village in the Gorumara region. There’s a tall watch tower within the resort premises that amplify the gaze of anyone climbing onto it. Not only a sense of being surrounded by the forest in whichever direction your eyes may trace but also the live sound effects add to the thrill and sense of adventure every minute of the stay. The wind, that blows in its strangest fashion, relentlessly, through the whole jungle, leads to the rustling sound of leaves, the animals, the birds both native and migratory and the jungle itself make a blend of mesmerizing melodies, so soothing and on the same time contemplating the hollow and silence of the ragged alive through forest. The night is no different as various sounds tend to keep you awake and alert for sure. The shooting chirrups subside and get replaced with a much ominous feel – just a bit of adrenaline rush through and not really threatening.

Nature’s lullabies – no, they don’t stop – not in this vast forest land! 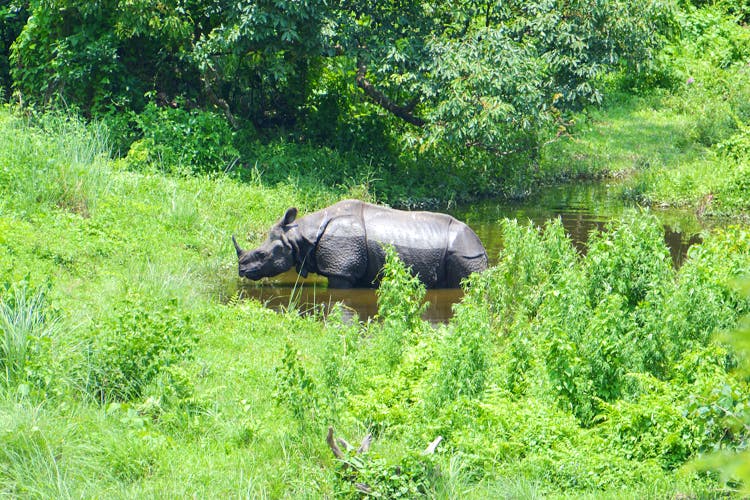 Gorumara is home to several animals and birds, some species are simply the exclusive edition of Himalayan foothills. Indian rhino, Asian elephants, gaur, chital, sambar deer, Himalayan leopard, pygmy hog, Indian rock python are some of the most anticipated ones. However, if you’re watchful and have quick responses you might catch sight of the Malayan Giant Squirrel lurking by the trees. scarlet minivet, spangled drongo, Indian hornbill, Brahminy duck (migratory bird). The tour might lead you to spot some of those in naked eyes but it’s best to rely on the Binoculars.

There are many watchtowers inside the forest to give the visitors an advantage to spot one or more of the inhabitant species of the Gorumara Abhay Aranya. Some of the prominent ones are Jatraprasad Watch Tower, Rhino Observation Point, Chandrachur Watch Tower (Old Khunia Watch Tower), Chukchuki Bird-watching Point. 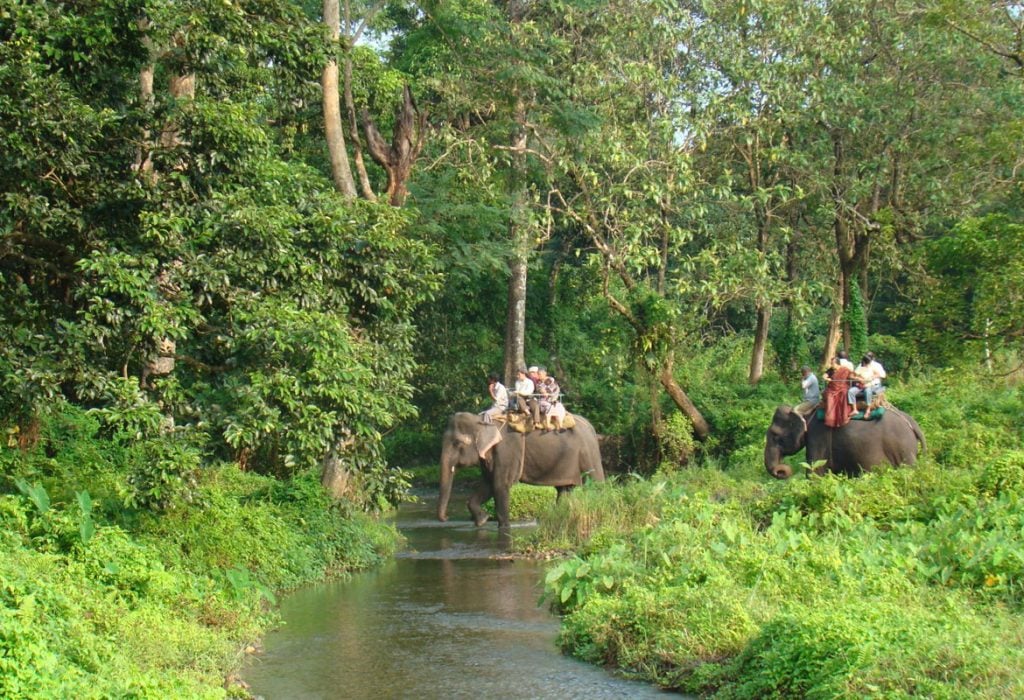 Here comes the best part of Doars safari: you get to ride on an elephant’s back instead of the rowdy jeep. I personally feel this setting so lot better to explore the wilderness, unspoilt by the consistent cacophony from static grumbling of the engine.

As our four-legged companion slowly emerged through the candidly paved way, the deeper it got. It looked like the forest started growing thicker on us, the light dimmed with lesser rays penetrating through the canopy. It felt like the trees had their eyes fixed, they were talking in whispers, which were being carried through the wind into the strangest corners of the forest. Queer shrieks of some unknown bird or animal from afar and humming of insects were breaking the silence at times but it was just an add-on to the thrill. The far corners where the light couldn’t reach gave us goosebumps and occasionally chill down the spine, while the imagination spun the picture that any moment now the most benevolent forest will unravel its most insidious brutality and make the most fierce and famished animals ambush us within a flurry.

Doesn’t that sound like an adventure of a lifetime? Isn’t it the kind of adrenaline rush in a jolt that all adventure enthusiast crave?

Don’t you count on the odds if you’re not the “jump into adventure types”, for a good guide and a healthy elephant will keep you miles away from any such harm!

So, thus was Gorumara…