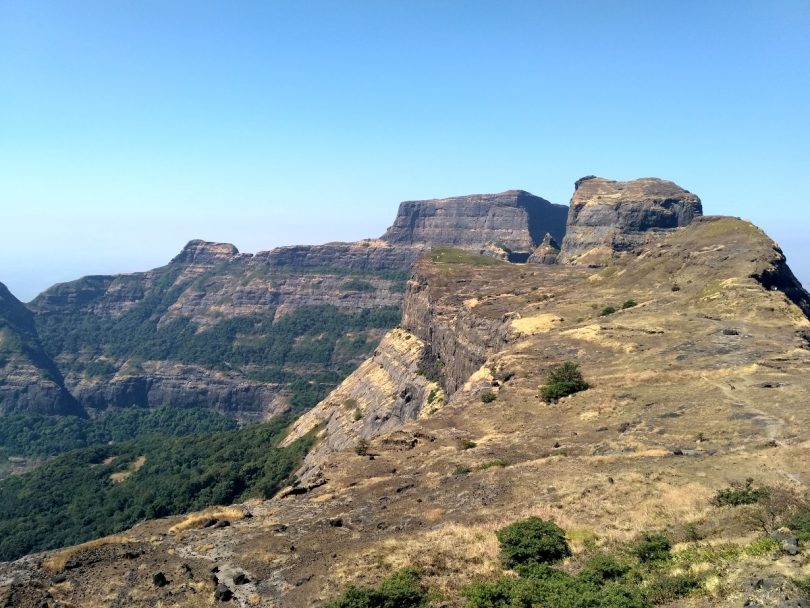 One must not miss going for a trek when in Pune, especially during the monsoon season. Pune is surrounded by a number of hill forts and trekking places in Sahayadri mountains. These forts offer some of the best weekend trek experiences from Pune, along with lush green mountains, milky waterfalls, breathtaking valley views, and the best views of other nearby forts/ peaks.

Also, the weekend treks from Pune is ideal for beginners as well as for the extreme adventure lovers, which will test their endurance at the most. Some moderate and easy difficulty level treks can also be climbed at night offering you a distinct experience.

The uniqueness of the treks around Pune is that most of the forts can be visited throughout the year, except during the hot days of summer. The view from each mountain top will be unique to each season, giving you a different experience altogether.

Previously known as ‘Kondhana’, this fort has been a site for many battles. The most famous one being the Battle in 1670, wherein the great warrior from Shivaji Maharaj’s army- Tanaji Malusare defended the fort but eventually lost his life. It was after his victory that the fort was named Sinhagad (Lion’s fort). Shivaji Maharaj renamed this fort in the memory of his great warrior by saying “Gad aala, pan Sinha Gela”, meaning – the fort is conquered, but the lion has gone.

Katraj to Sinhagad is a very popular weekend trek from Pune, that starts from Katraj tunnel till Sinhagad fort. The total distance is about 16 km. It requires approximately 7-8 hours to complete the trek. This trek requires high endurance as you will have to cross 15-17 hills.

The trek is also done on a full moon night, wherein you reach Sinhagad by the time of sunrise. Once you reach the fort, don’t forget to try the “Zunka/Pithala Bhaakar”, onion pakodas, and the delicious yogurt served in clay pots.

The best time to visit the fort is during monsoon.

Raigad is a hill fort situated in the Mahad district. The Raigad Fort was built by Chandraraoji More, who was then the king of Jawali. The fort was seized by Shivaji Maharaj and was made the capital in 1674. The fort was renovated and expanded and renamed as Raigad (earlier it was called Rairi) and was made as to the capital of the Maratha empire.

The ruins of the palaces, queen’s quarters, various chambers, market areas are still seen on the fort. The famous “Hirakani buruj” (bation), is named after a woman, who had climbed down the cliff in pitch darkness, to get back to her infant in the village at the foothills. On hearing this, Shivaji Maharaj asked her to repeat that extraordinary feat, because no one had dared to do so till date. which she did and in appreciation of her bravery and courage, the king built a bastion over that place and named it after her.

It takes about 1-2 hours to climb up. The ropeway is also operated here.

The best time to visit is from September to March.

Takmak Tok (a cliff from which sentenced prisoners were thrown to death), Jagadishwar mandir, Waghya samadhi (loyal dog of Maharaj), Hatti talav, Khublada buruj are major attractions on the fort.

Rajmachi consists of twin fortress Shrivardhan and Manaranjan, with a wide plateau (machi), that surrounds these forts. This fort was built during the Satvahana reign and served as a prominent point connecting the trade route of Mumbai and Pune.

This fort kept shifting its ownership between the Bijapur sultan, Marathas and the Mughals until finally fell in the hands of the Britishers. The two fortresses on top offer the best view of the train tunnels, the hill station of Lonavala, surrounding forts, Duke’s nose, and some nearby waterfalls.

The trek to the top is started either from Lonavala or Kondhane village in Karjat. It takes around 3-4 hrs from Lonavala station, but most of the route is almost a plain walk. From Kondhane village, there is a steep climb that could take about 2 hrs. One can also go by vehicle till Udhewadi, which is located on the machi, at the base of the two fortresses. But it can be done only if you have a sturdy utility vehicle.

The best time to do Rajmachi weekend trek from Pune is from June to December. If you visit in June, just before monsoon, there are very high chances of witnessing fireflies on the way.

Bhimashankar is famous for its jyotirlinga shrine, which witnesses a heavy footfall of the devotees throughout the year. The temple is surrounded by thick forest, that houses a number of plant and animal species. Due to a vast variety of flora and avifauna this region has turned into a wildlife sanctuary.

Previously, this region was created to protect the state animal of Maharashtra that is the giant squirrel. The weekend trek to bhimashankar jyotirlinga is a great adventure activity for nature lovers and trekkers as well, as it will take you through the wildlife sanctuary.

One can visit Bhimashakar all around the year, but the best time to do this monsoon trek from Pune is during the monsoon season, wherein one can view fireflies if it’s a night trek.

Hadsar fort is also known as Parvatgad and was believed to be built in the Satvahana era. It served as a major watchtower on the trade route of Maval to Kalyan. The specialty of the fort is its beautiful main entrance, which is carved out of a single rock along with the steps that lead to the entrance. There is a big lake and a Mahadev temple on the fort.

There are two routes to climb from the Hadsar village. The easier is from the southern side, which will take you to the main entrance in about an hour.

The other route has a rock patch that is 20 feet tall but has rock-cut holds and iron thrusts to rely upon, but safety equipment like ropes and harness must be used by beginners. This route will take you to the top in 1-2 hrs.

The best time to visit is from October to March.

Tailbaila trek consists of two massive steep walls referred to as Tail and Bail and a Mahadev Temple in between.

Tailbaila fort was built during the Maratha Empire but was later destroyed by the Britishers using mines and canons. But the valley around it serves the most spectacular views of Sudhgad, Sarasgad, and Ghangad.

The two walls together have 4 routes to reach the top. The ascent to the top requires prior experience and good technical knowledge.

This weekend trek is in the must-do list of rock climbers and extreme adventure enthusiasts around Pune. One can reach the Mahadev temple in 30 mins from the base village, but further you will require a good technical assistant to reach the top, which can take more than 2 hours.

The best time to visit is from November to March.

This trek is one of the most refreshing treks of the Sahyadris.

The word Andharban comprises of Andhar (means dark) and ban (means forest), as this trail passes through the dense forest surrounding the Kundalika river valley.

Andharban is a forest trail near Tamhini ghat, with one of the most beautiful green valley and waterfall views. The Devkund waterfall along the route is a hidden gem.

The route to Devkund waterfall is little off track and can be skipped to directly reach the backwaters of the Bhira dam. The andharban trail is mostly descending, but there are small uphill climbs on the way to Devkund.

This weekend trek from Pune can prove to be a good experience for beginners as well as experts as the views around can really treat your mind. It takes around 4-5 hrs to complete the trail.

The best time to visit is from July to November.

The word “Kathin” in Marathi means difficult, as climbing this fort is quite challenging due to the narrow route at the edge. The fort was built during the Adil Shahi dynasty but later was captured by Shivaji Maharaj. The fort served as a major watchtower overlooking the Maval region, guarding the route to Pune. The conical and sharp peak makes it easily identifiable from the distance.

The fort offers a panoramic view of the Pawana Lake, forts of Lohagad, Visapur, Tikona, Korigad along the Mulshi valley.

After the construction of the Pawana Dam, the fort is surrounded by the Pawana lake on three sides. One can take a ferry or can use take a route via Bhushi dam to reach the base village. It takes about an hour to reach the top.

The best time to visit the fort is from October to March.

The name Irshalgad is a misnomer, as it is actually a pinnacle, not a fort. The pinnacle has mentioned in history only as a watchtower, during the reign of Shivaji Maharaj.

The pinnacle has a rock-cut hole, which is called ‘Nedhe’ or Needle hole. Due to the distinct shape of the fort, it can be easily identified from distance. The top of the pinnacle offers the view of Prabalgad, Manikgad, Chanderi, Malanggad, and Karnala. The climb till the Nedhe will take 1-2 hrs. Further to reach the pinnacle, you will need technical rock climbing equipment.

The best time to visit the fort is from June to April.

Dhak Bhairi is a cave dedicated to lord Bhairavnath in the Sahyadris. It is believed that Shivaji Maharaj had once visited this cave temple.

The trek is divided into two parts – the Dhak peak and the adjoining Kalakrai pinnacle. The cave temple offers a beautiful view of the forts near Lonavala and is an ideal place for camping.

One can start the trek from Jambhivali which near Lonavala or Sandashi village which is in Karjat. From both the places, the trekking time to the cave temple is 1-2 hours.

The trek needs prior experience as one has to be very careful at the rocky patches and use the support of the fixed ropes and hooks to climb safely. The Kalakrai pinnacle, however, is a full technical climb.

The best time to visit dhak bhairi is from November to February.

Korigad is also known as Koraigad, Koarigad, or Kumwarigad. The fort got its name due to the temple of the patron goddess Koraidevi that is located on the fort. This fort was a part of the Maratha kingdom but was later captured by the British.

Korigad fort overlooks the planned township of the Amby valley at the southern and eastern foothills. There are several small temples on the fort, two lakes, and several canyons. The largest one is the Laxmi Toph, which is placed near the Koraidevi temple.

The walls of the Korigad fort are completely intact along with the main gate. This fort is ideal for camping. The fort can be visited all around the year, but the best views can be captured during the monsoon.

Several water streams gush through the steps on the way making the trek route more enjoyable.

The trek includes the two important forts of the Maratha empire. The Rajgad fort was the former capital of the Maratha empire before Raigad was captured. Torna has a historical importance of being the first fort captured by Shivaji Maharaj after the foundation of “Swarajya”. Rajgad is also known as one of the best-constructed hill forts.

The climb from Gunjavane to the top of Rajgad takes around 1-2 hrs. And further, the trek from Rajgad to Torna can take 6-8 hrs. The views of the deep valleys along the route make the trek unnerving yet blissful.

Mostly this part is done at night, so as the reach the Torna fort just before dawn and enjoy the sunrise.

The best time for this trek is from November to March.