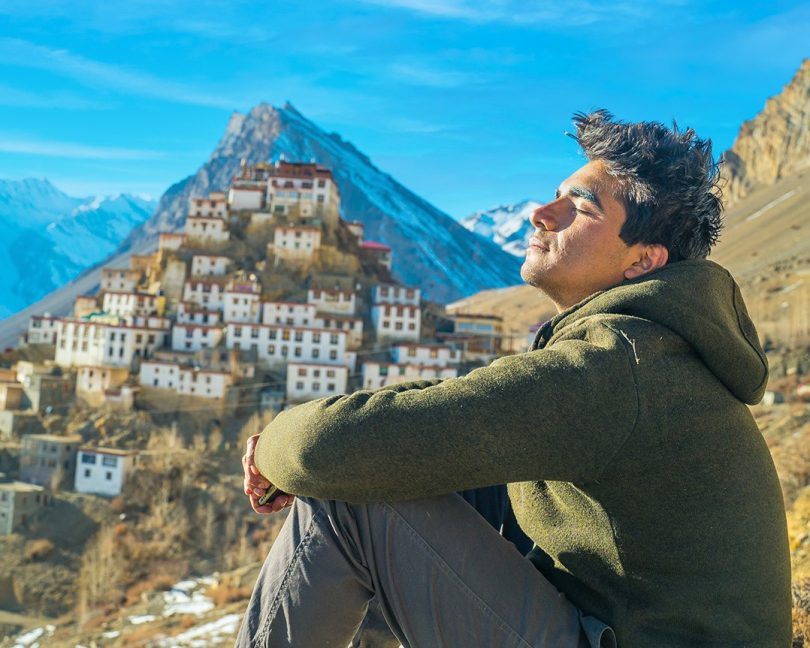 Spiti Valley is paradise personified. Every offbeat traveler strives to check this destination off their bucket list. The valley comprises pristine lakes, beautiful monasteries, and enchanting valleys. For a destination that has so much to offer, it can be confusing to understand what are the best places to visit in Spiti Valley.

It is a stunning town located at an elevation of about 12,500 feet in the beautiful Lahaul and Spiti Valley. Steep ridges tower over this magnificent village. With majestic snow-covered mountains, splashing rivers, scenic landscapes, and bustling markets, Kaza has a lot to offer.

Interestingly, the entire town of Kaza is divided into two main sections: the old Kaza and the new Kaza. The old Kaza is also known as Kaza Khas and encompasses the King’s palace, Monasteries, and ancient structures. Whereas the new Kaza which is known as Kaza Soma incorporates government offices, hotel chains, and food outlets.

Chicham Bridge, Key Monastery, Hikkim, and other attractions are in Kaza. Key Monastery is home to over 100 lamas and is the largest and oldest gompa. In addition, Chicham Bridge and Hikkim are the highest points in Spiti Valley. From Hikkim, you can send handwritten postcards to your loved ones from the Highest Post office in the World.

The world’s highest village, rising 15,027 feet above sea level is next on the list of best places to visit in Spiti Valley. Komic perfectly captures the essence of Spiti’s elegance and allure.

Above all, breathing in the cleanest air, and living a simple yet empowering life is all that Komic is about. The simplicity this place has to offer is one of the best things about visiting it.

As narrated by the locals, it is believed that when monks decided to shift the monastery to Hikkim Village, a strange thing happened. The statue of Mahakaal refused to move despite tremendous efforts. So on, the monastery was shifted however a monk was left beside the statute to pray.

However, around 1975, an earthquake reduced the magnificent new monastery into bare pieces. These are still found when one travels to Kaza from Hikkim.

But the Mahakaal Statue was still intact despite the massive earthquake that hit the Valley.

As a result, the Monks decided to shift the monastery back to where it belonged.

Must-watch: The Lama of Gue who became a living God

Nestled in the remote areas of the Himalayas, Dhankar Village is a tiny village of nearly 70 houses. The words ‘Dhang‘ and ‘Kar‘ mean cliff and fort, respectively. As a result, the village’s name means “a fort on the cliff”. It is one of those unusual tourist destinations that are only known by a few.

Dhankar Lake, with its sparkling crystal clear waters, is folded atop a small hill. It is nestled at an astounding altitude of 4100 meters. The hike from the village to the lake is only 5 kilometers long, but it is difficult and time-consuming. It’s difficult to catch a gulp of air because of the low or lacking oxygen level caused by the altitude. The road leading to the lake is also restrictive and steep but worth the view.

Furthermore, the Dhankar Monastery (Drangkhar, and Dhangkar Gompa) is situated at a peak of about 3870 meters. It is a short distance from the lake.  The monastery is among the five important Buddhist centers in the region and is a major tourist attraction. The monastery is situated on an edge of the cliff at an unordinary angle. This provides a stunning wide-angle view of the entire valley.

This Valley is a cluster of 17 villages in the Spiti district with a population of merely 2000 people.

Despite the increase in tourism, numerous areas in Spiti Valley continue to stay remote and underexplored. Pin Valley has a fair amount of greenery and vegetation than the other villages in Spiti Valley.

In addition, Pin Valley National Park in Himachal Pradesh’s only National Park located in a cold desert area. In 1987, the intention to establish Pin Valley as a National Park was announced. It is well-known as the prevalent habitat of the snow leopard. The large Himalayan ghost cat has enticed thousands of visitors while eluding them with a single glimpse.

After that, Kungri Monastery in Pin valley was built in 1330. It is a great attraction for Buddhist scholars, pilgrims, and foreign visitors from all around the world. Its original objective is to showcase a treasure trove of primitive Tibetan Buddhist art, culture, and ritual. The classical ‘Devil Dance,’ which is performed at this historic monastery, is a further attraction.

This monastery in Tabo Valley is home to nine temples dedicated to Tara and Buddha Maitreya. As well as enchanting works of art, stucco sculptures of Bodhisattvas, and stupas. It was built by the renowned Buddhist king, Yeshe-O.

The Monastery is a treasure to the community and captures the essence of the culture beautifully. It is also widely recognized as the Ajanta of the Himalayas. This is because the monastery’s walls are embellished with captivating murals and primitive artwork. This is similar to the Ajanta Caves in Maharashtra.

The Archaeological Survey of India designated it a “National Historic Treasure”. Above all, a visit to this monastery is a divine delight for all those seeking peace and incredibly interesting history.

Must-read: Here’s what you get to see on an All-Girls Trip to Spiti

The Moon Lake or Chandratal is located at an elevation of 4300 meters. It offers the most magical view in the region. This dazzling scenic miracle, situated close to Kunzum Pass, is a photographer’s and trekker’s heaven.

This is a blissful tourist attraction with crystal blue water. The lake is adorned by luscious vegetation and snow-capped mountain ranges. The road to this pristine lake winds through Batal trails that will get your heart racing.

Additionally, You will also have the opportunity to move up to the glaciers between Kunzum Pass and Rohtang Pass. This enthralling location has much folklore connected to it. However, what draws visitors is its accented blue water, mountain views, and soothing surroundings.

Langza Village is a delightful tourist attraction at an elevation of 4400 meters. Antiquated monasteries and pre-historic structures adorn this majestic village. On the other hand, green meadows, snow-clad mountains, and deserted landscapes add more charm to its beauty.

This is one of India’s most remote villages, split into two sections: Langza Yongma (lower) and Langza Gongma (upper).  It habitats around 137 people. One can also find Handmade products such as shawls and carpets here.

The tallest architecture here is a tremendous statue of Lord Buddha safeguarding the village. To add, The Chau Chau Kang Nilda peak is another prominent aspect of the village that dominates the scenery.

Fun Fact: You can see kids moving around the village accumulating and playing with fossils. Along with attempting to convince tourists to purchase them in exchange for money. The local name for this type of fossil is ‘chaudua‘.

Must Read: Places to eat in Spiti valley

Next on our list of the best places to visit in Spiti Valley is the iconic Kunzum La. This is a getaway to paradise in Spiti Valley via Kullu and Lahul. It is one of India’s highest motorable passes, rising 15,060 feet above sea level.

It provides an astounding sight. Whilst also biking, one can take in views of the grand Chandra Bhaga ranges. To find lodging or dining options, you can go over to the nearby village ‘Losar‘. That is only 16 kilometers from Kunzum Pass.

In addition, tourists frequently pay a visit to the temple to try to obtain the good wishes of Goddess Durga. And to visit Chandratal Lake, which is only 7 kilometers from Kunzum Pass. This route is so magnificent that people just stop here to snap photographs. In addition, view the splendid Bara-Sigri Glacier, the world’s second-largest glacier..

If you are already out here imagining yourself in all these offbeat destinations in Spiti Valley. Then how fun it would be to go and experience it! Tick the much-awaited Spiti Valley Trip off your bucket list.