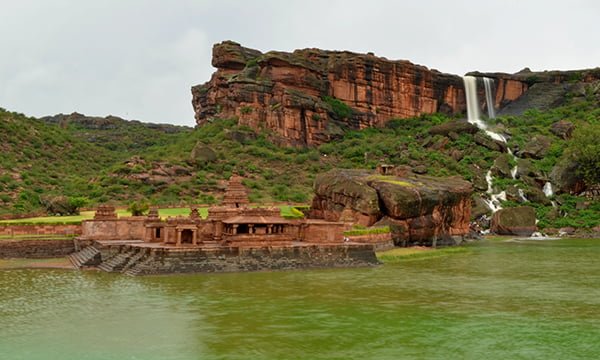 If you’re an enthusiast of archaeological-tour, Ajanta and Elora caves are not the only stone burrowed marvels that bear the legacy of India’s rarified heritage. The Badami Caves of Karnataka are no less a wonder. The very sight of the place is not only intriguing but feels like ethereal.  In fact, this place is an embodiment of cultural inter-existence… with 3 caves dedicated to Hindu deities and 4th one extolling the divinity of Jain religion.  Besides, the sprouts of water amidst the lush green carpet of nature on the sandstone hills create a picturesque backdrop to add to the essence of a walk back in time. 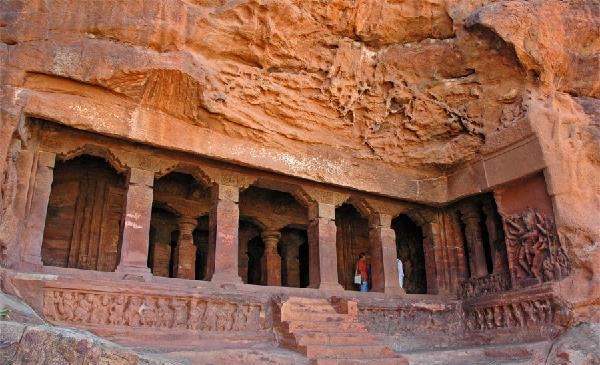 The grandeur of the main entrance to Cave-1 with chiselled Nataraj on the right.

The sanguine sandstone carved cave temples reflects the Dravidian and Nagara architecture styles. While the etched frieze tells the story from the Hindu mythology in the most expressive way, the chiselled pillars are the souvenir of excellent craftsmanship and artistic eminence. 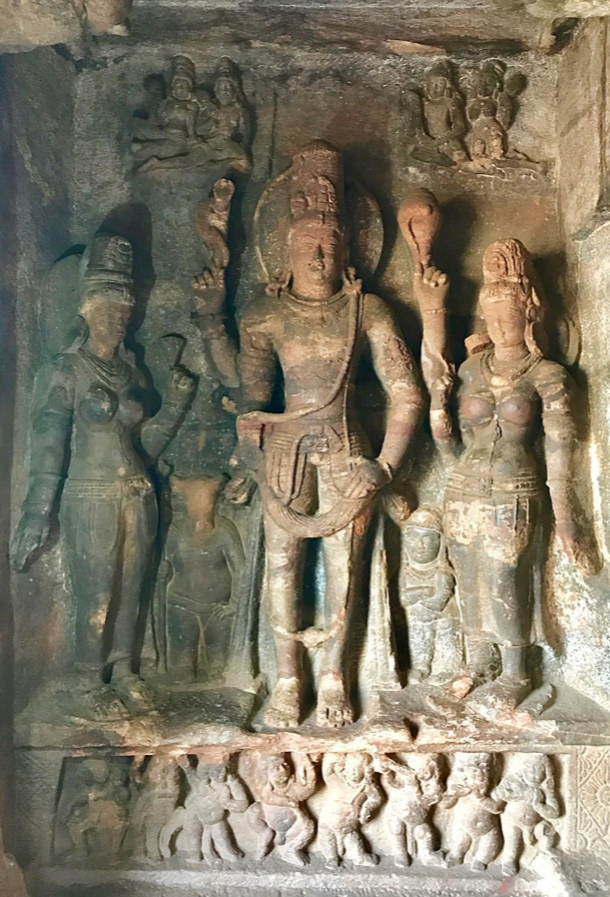 The Harihara sculpture – with Dwarfish Ganas at its base and chiselled ornamental foliage.

The cave-1 delineates the devotion to Lord Shiva – the destroyer. Stepping inside from the Mukha Mandapa – more prominently known as varandah, stands the two-handed statue of Lord Shiva with a bull-elephant fused Nandi by his feet – regarded as the keeper of the sanctum. On the right, however, there’s a sculpture of Harihara with Devi Laxmi and Parvati on either side – an incarnation of Lord Shiva and Vishnu contributing one half each and conjoining as a whole being. 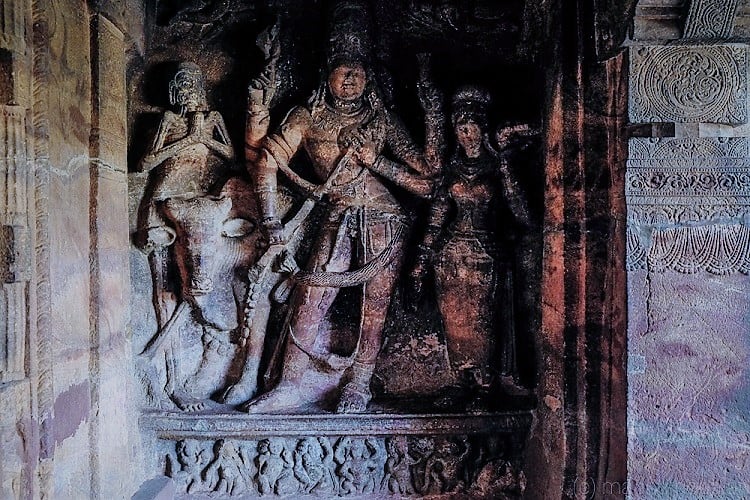 Ardhanarishiva – the emblem of consort – where the male and female counterparts unite as one.

Other distinguished effigies in cave-1 are that of an Ardhanarishiva, where Shiva and his consort Parvati unite as one with Nandi and Bhiringi by the left as well as a female-attendant on the right. Inside the cave, the statues of Ganesha and Kartike adorns the way towards the Garbha Griha…..intensifying the pristine aura of the sanctum. Also, the central panel of the cave roof carved to shape-out the Nagraj – the supreme of all snakes. 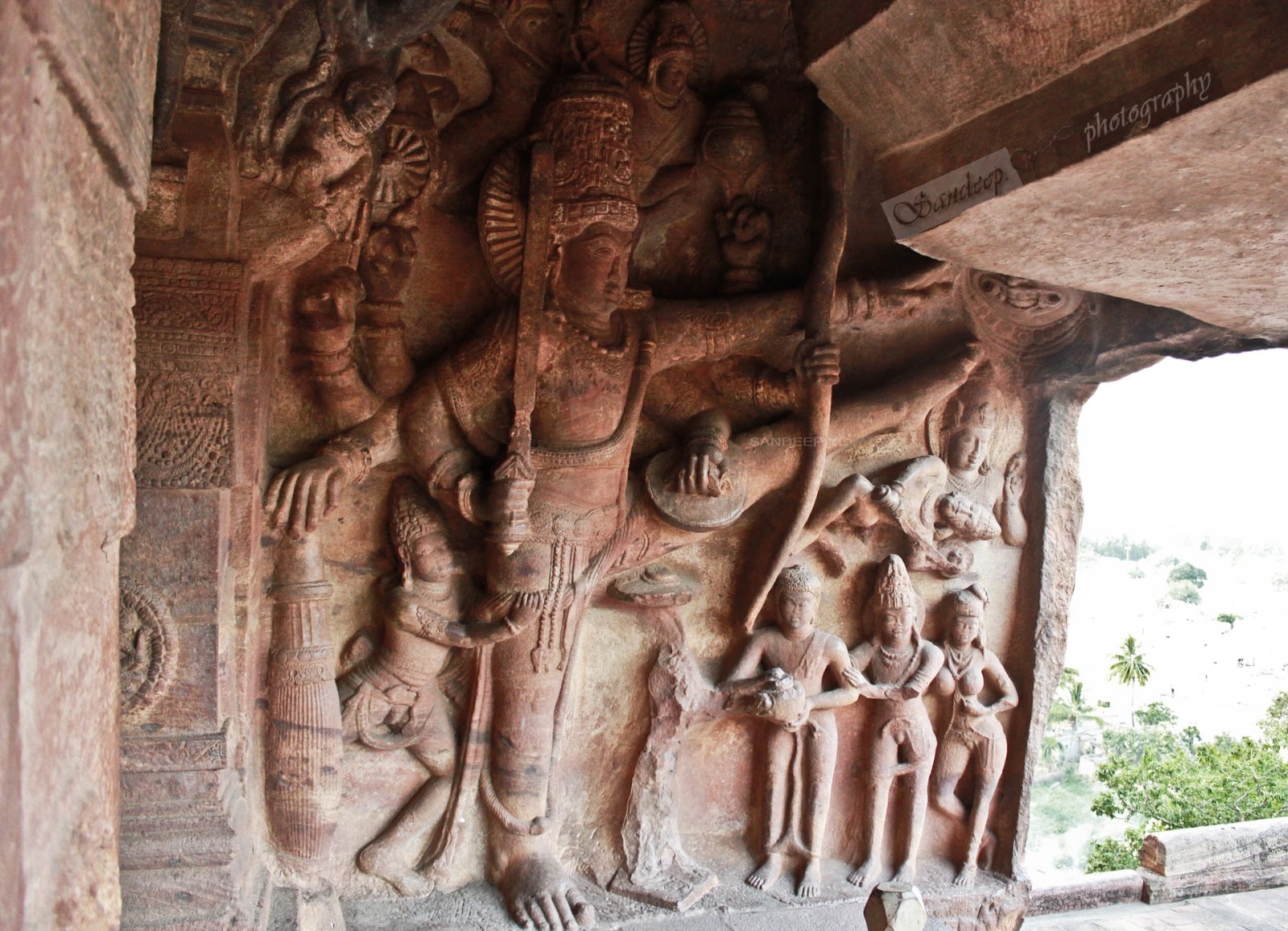 Trivikrama – the colossal incarnation of Lord Vishnu to restore the cosmic balance of heaven, earth and underworld.

The cave-2 is a monolithic stone carved eulogy to Lord Vishnu – supposedly the oldest of the caves at this heritage site. A staircase with around 64 ascending steps connects cave 1 and 2. The main attraction in this cave is the chiselled chronicle of Dasavatar as well as the epic scene of Samudra Manthan as per the Hindu theology. Besides, there are Dwarpalas – the guardian angels holding garlands to welcome all visitors with their stony yet generous expressions as well as traces of fresco paintings as vestige of colours on the walls and ceiling. 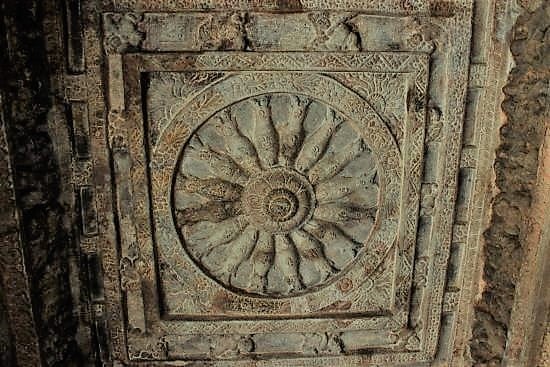 The beauty of the burrowed cove of sandstone is beyond the mammoth strata of the cave temples or the sculptures of deities. There are several wonderous ceiling and door heads which are absolute artistic marvels – the Gajalaxmi door head, Bas-reliefs on the roof panels, the wheel with 16 fishes as its spokes and the sacred Hindu symbol of Swastika engraved on the ceiling deserves grand plaudits from the spectators. 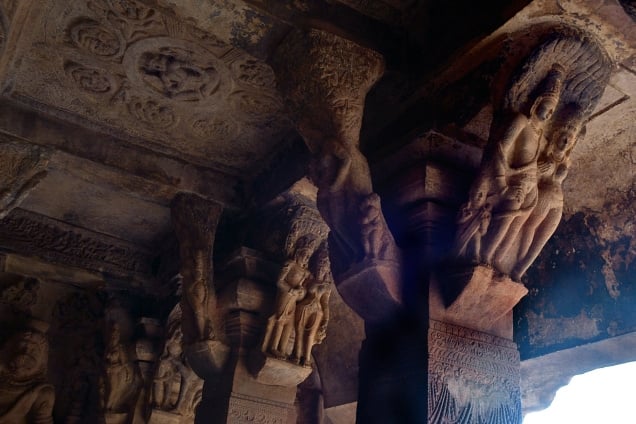 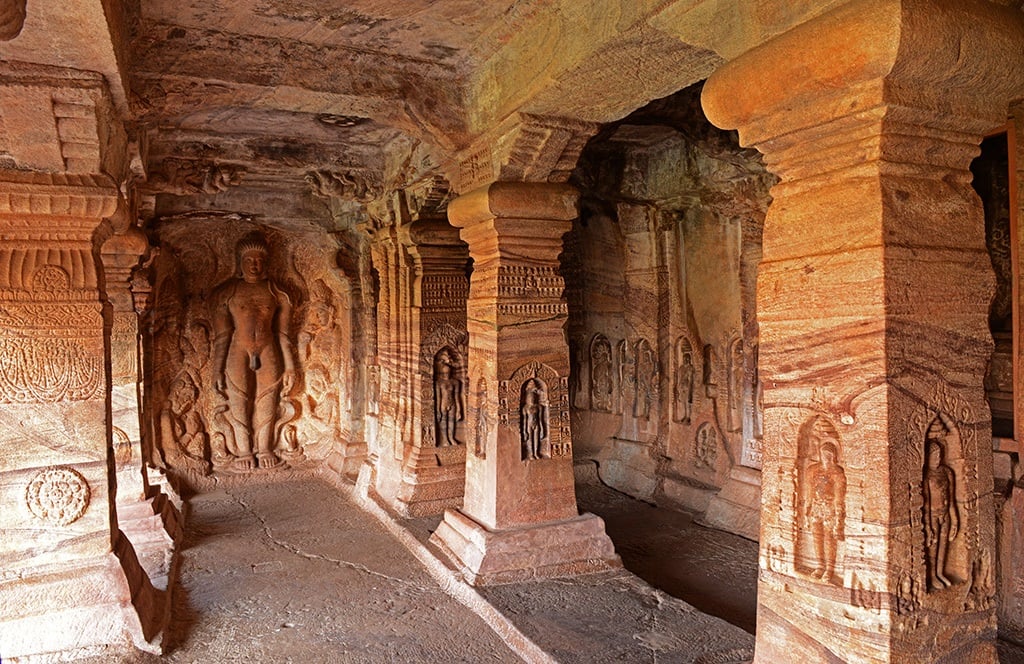 East of cave-3, the Jain cave is regarded as the 4th one and is 10 feet below the level of the others. It’s a reverence to Bahubali, Parshavanath and Mahavira with their various tales and classic idols. The rufescent sandstone edifice here, however, is more recent – making the chiselled sanctitude more pronounced. Engraved images of 24 extraordinary Tirthankaras are found in the pillars, inside the sanctum along with small sculptures of Yakshas, Yakshis and Padmavati.

Easily accessible from both Bengaluru and Mysuru, this UNESCO declared World Heritage site is indeed a must visit with or without the zeal for archaeological marvels. The best time to visit would be before the scorching summers sets in or after the tropical heat have faded away into cool breeze and mists.