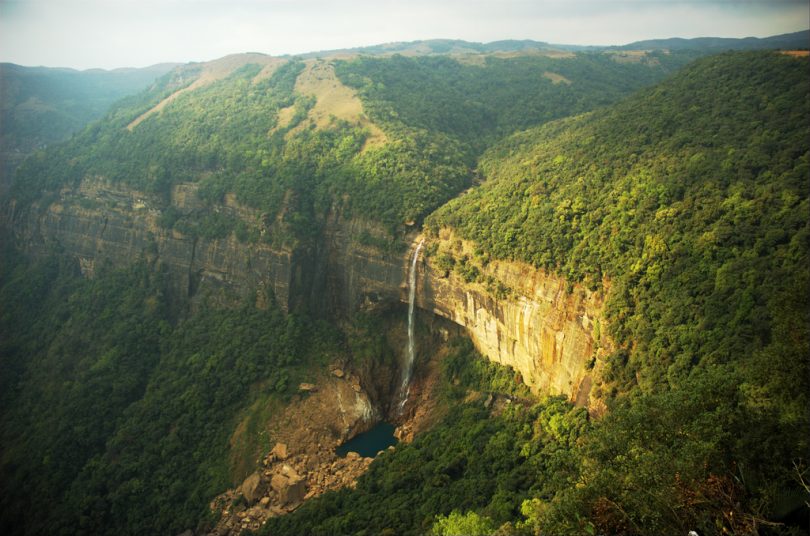 Nohkalikai Falls looks breathtaking from the front view but it has a horrific storyline attached to its core. Want to go ahead and know more about the same. Well! There’s no reason why you would not. So, here it begins.

Back in the day, something about 2000 years back as the legend says, there was a family of three living in a village which was located upstream from the falls. They were just like your usual everyday family consisting of one set of parents and their daughter.

But just like any other story, tragedy was waiting for this family as well. Which came from the death of the man of the family, leaving behind the mother and daughter.

So, in order to continue her life and make sure that her daughter does have a good future ahead. The mother remarries and starts a new family. At this point, usually we would think that the story would have a happy ending as now the mother and daughter had a new family. But a big no to that.

Moving on, one prominent fact about the new family was that the mother never has enough time to do anything, not even pay much attention to her new husband. She had to go out for a job, at being a porter due to low family income and huge expanses.

The time which was left from her job was spent taking care of her infant daughter from her first husband. Now, as you may have already guessed, this resulted in making the new husband very very jealous as he was being ignored for the time being.

Again, tragedies always find their way into stories and this one does have another. So, back at the story, we knew the situation was very clear and the husband was getting cooked with each passing day.

So, when one day the mother moved out of her house in order to go to her day job, leaving the daughter behind in the custody of her step father, things got out of control. The loneliness and ignorance that have been accumulated over the period of time made the stepfather go berserk and take a horrific decision.

He murdered the infant in broad daylight without a sign of regret, he even went further into the woods and cooked the meat of the little baby girl, not to satisfy his hunger but his anger.

When the mother returned home that evening, he found the house completely empty and all there was to look at in the house was a prepared meal waiting to be eaten.

The first thought that hit her mind was to go and look for the members of the family but due to tiredness, she went ahead and decided to have the meal first. Now, you must have guessed it by now. The meal she so eventfully went ahead for, was no one else but her own daughter.

But she didn’t knew all that up until that point, it was only at the time when she went to have her after dinner betel leaf in the woods, that she found blood and gore, all around.

Upon going further, she came across more blood and severed fingers as well. The moment hit her hard and shook her to the core as she realised what had happened.

The feeling of agony, betrayal, sadness and twenty other emotions came rushing down at her. In the heat of the moment she started running uncontrollably and nobody could have stopped her that day. The loving mother of the child was crying from both inside and outside, with her belly full of her own daughter’s flesh. There was nothing that could have saved her past that moment of realisation.

She ran and ran and then she ran some more, eventually to meet her end by jumping from the falls. This is how the tragedy hit the family of three, making the man of the house dead, the daughter murdered and eaten and the mother dropping off the falls.

By the way, the mother was called Likai and the waterfall that stands tall as one of the highest plunge waterfalls in India is called Nohkalikai. The rest you can figure yourself out or if you want to continue further ahead, you might want to visit Meghalaya.

If you are interested in exploring Meghalaya, do checkout our “Backpacking Trip to Meghalaya”.