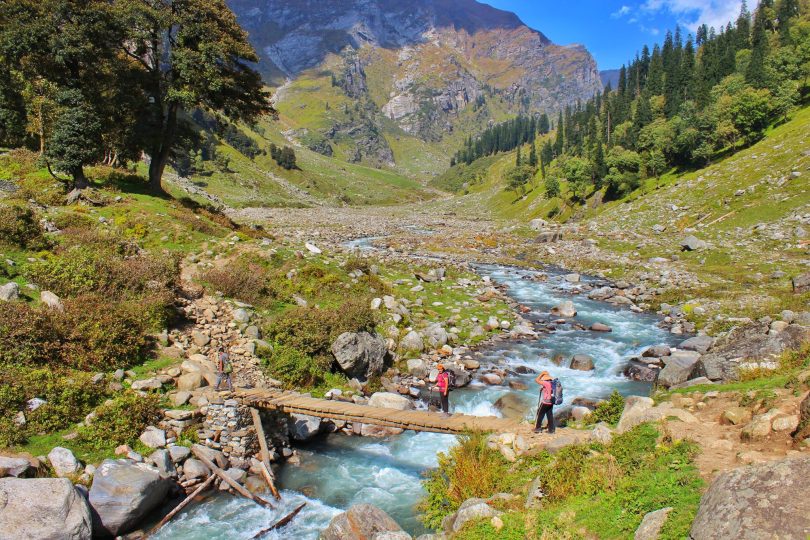 India is a land of rich topography and the most magnificent part of our country’s diverse landscapes are The Great Himalayas. The abundance of trekking trails in the country are proof that people have always sought peace in the lap of these majestic mountains and continue to do so, even now.

When the city noise gets too loud, people often find refuge in the mountains and naturally, trekking has become a popular activity in recent years. More so when it comes to summer treks because they are a perfect escape from both the exhausting humdrums of our daily lives and the blazing hot temperature in metropolitan areas.

But with so many Himalayan treks to choose from, it can get hard for trekkers to decide which trek to go on, which is why we have categorized the best summer treks to do in 2022.

From being accessible to the difficulty level of these high altitude treks, this list is basically a comprehensive guide that can help you choose your next trekking adventure.

Kashmir is renowned as paradise on earth for its incomparable beauty and it is for that very reason that the Kashmir great lake trek is one of the best Himalayan treks our country has to offer. As the name suggests, embarking on this trek means that you get to witness the magic of heavenly lakes embracing the Himalayas.

For experienced trekkers, the Kashmir great lakes trek is still comparatively easier but no less challenging. But all the hardships are worth every second because you would be witnessing nature embodying slices of heaven in each and every corner.

Each pass on the Kashmir Great Lakes Trek has its own charm, from the lush green canopies of Shekdur to the pastures of Nichnai and silver streams of Vishnusar grasslands, there isn’t any view that doesn’t leave you mesmerized. When it comes to the pristine Himalayan lakes that are the main attraction of this trek, the most fascinating thing about these lakes is that they seem to keep changing their colors throughout the day. From shades of blue to green, they embody the colors of nature quite beautifully.

The best time to do the Kashmir Great lakes trek is from the months of July to early September. Although these are rainy months, the Pir panjal ranges of Himalaya don’t see much rain and the flowers in the valley of Kashmir bloom beautifully making it one of the best summer treks.

The contrasting trails of the Hampta Pass trek takes you through alpine forests where maple, brich, oak, and deodar trees rustle their leaves in sync with the cool breeze.

The Hampta pass itself  acts as a vantage point, from where you can witness two equally beautiful parts of Himachal’s topography. If you were to look in the northern direction, you’d witness the majestic Lahaul valley stretching up to a vast expanse of land, deprived of vegetation while if you were to look on the other side of the trail, you’d witness jade green forests that adorn the valley of Kullu.

Nestled in the Pir Panjal ranges of Himalayas, the Hampta pass trek is an enthralling trek with the maximum altitude attained in the span of five days being 14,100 Ft.

The best part is that the trek ends with a visit to the crescent moon shaped lake, Chandratal which is one of the most popular attractions of Spiti Valley.

3. The Valley of Flowers Trek

Nestled at an altitude of 12,000ft, The Valley of Flower National park along with Nanda Devi National park come together to form a transition zone between the mighty Himalayas and the Zanskar range of mountains.

The Valley of Flowers trek is an easy to moderate trek that offers a rare access to the Himalayan ranges in Uttarakhand.The valley itself is about 2 km wide and 8 km long. The temperature on the Valley of flowers trek usually stays somewhere between 5 to 20 degrees celsius with high chances of rainfall while trekking as the clouds are almost thick over the valley. It is one of the best monsoon as well as summer treks.

The trekking from Ghangaria to Hemkund Sahib is the hardest part of the trek, making the difficulty level of Valley of flower trek increasing from easy to moderate because of the altitude gain as well as the steep ascents. However, the commencing of the trek ending with the peaceful chants at Hemkund Sahib makes all the efforts more worth it.

One thing that you need to know is that since the valley of flowers national park is a heritage site, There is an entry fee of Rs. 150 per head for Indians and Rs.600 for foreigners with the validity of the ticket lasting three days. Camping inside the valley isn’t allowed and every person has to leave until 5 pm in the evening.

The Ali Bedni Bugyal Trek is a culmination of mesmerizing hamlets lined with rhododendrons, oaks and birch trees. The highest populated village here treads to Khobal lake which will leave you in awe as you witness the beauty of nature.

Waking up to a sight that astounds you deeply is what you can expect here. Rising up to succumb to the beauty of the Himalayan ranges, with Mt. Trishul, Nandaghunti peaks straight ahead of you, beckoning you closer. The experience of witnessing the captivating panoramic views of the Himalayas is indescribable.

The trail to Ali Bedni bugyal trek doesn’t allow the trekkers to have a swift climb. The stretch of the trail is so that you don’t attain altitude fast. Unlike other Himalayan treks, the ascend in Ali-Bedni Bugyal trek is gradual. You commence your trek from Lohajung which is elevated at 7,800 ft. For the next couple of days as you trek, you gain an altitude of 3500 ft on average everyday. Since the ascend takes time, it becomes easier for your body to get used to the conditions making this trek slightly easier to embark upon even though the Ali Bedni Bugyal trek falls under the moderate category when it comes to the difficulty level.

One fun fact about the Ali Bedni Bugyal trek is that it lies on the route of the mysterious Roopkund Trek, popularly known as “The Lake of Skeletons” which is now banned.

At an elevation of 15,010 Ft, the Pangarchulla peak trek, with it’s stunning views of the Garhwal Himalayan peaks, Nanda Devi, Chaukhamba, Hati-Ghori to name a few, is one of the best summer treks for both novice as well as experienced trekkers. The initial path is lined with rocks but as you gradually ascend, it transforms into a picturesque landscape that is a beautiful blend of lush green meadows, rugged mountains and tiny hamlets consisting of wooden houses. Also known as the Chimney peak, it adorns the Lord Curzon circuit of trekking trails with its paths and diverse flora and fauna.

The beautiful golden hours view that you witness while you embark on the Pangarchulla trek are to die for but the sight of the majestic Himalayan peaks like Mt. Kamet, Mana Parvat, Garud, Trishul, Dronagiri is what makes you feel as if you are literally on top of the world.

The reason why the Pangarchulla peak trek is one of the best summer treks that you must do is that it is the embodiment of the grandeur that makes the great Himalayas as majestic as they are. You get to witness different peaks, traverse through nature, come across streams of Himalayan water and be acquainted with the flora and fauna the Himalayas are home to.

Now that you have the list of the best summer treks to do in 2022, we hope you’ll be heading to the Himalayas soon. But before that, make sure to check out these summer essentials that you must carry while going on a trek.