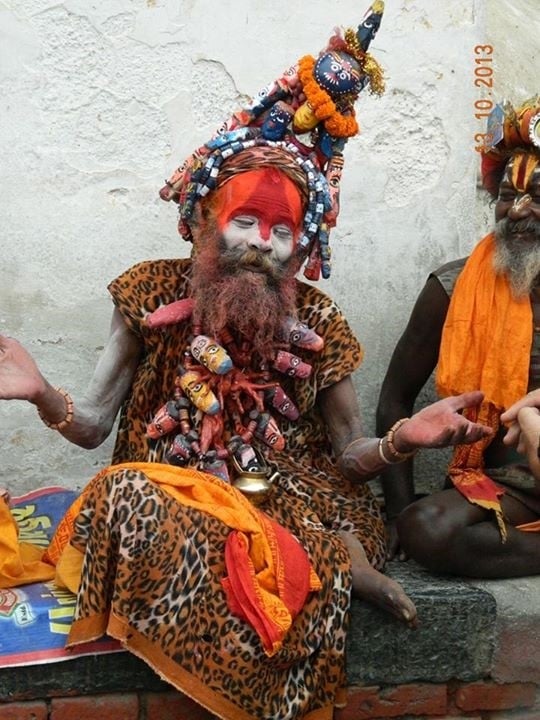 Upon reading the heart-rending news of the catastrophic earthquake last spring in Nepal, nothing but grief and sadness gripped me. But like a soft morning after a dark rainy night, it also brought back the sweet memories of my memorable road trip to Kathmandu. The details of which lie as fresh in my mind as a mountain spring.

Returning after a long melancholic day in office to our guesthouse in Hajipur, situated 25 Kms off Patna, capital of Bihar, in the autumn of 2013, we were all pondering over destinations to explore for the forthcoming Durga Puja holidays starting off the day after. After an hour-long search in Google Maps and a round of tea, came the golden suggestion: “Let’s Rideout to Nepal”.

Everybody’s eyes shined with unanimous acceptance. A quick check on Google estimated the destination to be around 500 km away. Immediately a few phone calls were made and after some negotiations, an Innova was booked and scheduled for departure next morning at 5. With happiness in the heart and restlessness in the gut, we went to sleep, but the eyes refused to shut with excitement that night.

Alarms are so annoying, but when you set it up for a cross border road trip even my ragged Nokia’s alarm tone seemed like a Pink Floyd song. Poop, brush, bathe, dress, pack, have a Maggi, all checked and we were ready to roll. Although the cab arrived half an hour late we were glad that it was relatively new and in perfect condition.

So, 6 young guys and a younger driver with both his hands on the wheel and his heart on the leap, started their journey to the magical mountain nation. When you have a smart-phone equipped with all the latest technologies invented by the smartest geeks of the world, you tend to underestimate the utter randomness of life, you feel in control and all your plans seem perfect.

And our perfect plan was to take the Hajipur-Sahebganj-Sagauli-Raxaul-Birganj-Hetauda-Naubise-Kathmandu route. The shortest and the sweetest. Convinced by our novice driver who boasted of multiple trips to Nepal, we soon drowned ourselves in music, laughter, and a short nap. But only three hours into the journey we found out, the driver had taken a wrong turn adding at least an hour to our journey. After stopping at a non-descriptive Dhaba near Motihari, which was not initially on our road map, for a quick tea and snacks, we continued towards Sagauli for the India-Nepal border at Raxaul.

Now, checking out the highway on the phone is one thing but plying on it along with a bullock cart at the same pace is entirely different. Nobody in the group, not even our ‘experienced’ driver was aware that the highway from Motihari to Raxaul via Sagauli was only for namesake and it was actually just a combination of large and small potholes on a casually leveled ground. We were slowly beginning to admire the randomness of nature but we came in complete awe of it only upon reaching the railway crossing at Raxaul.

Always remember Murphy’s law when you are out on a road trip: Anything that can go wrong will go wrong. And that noon, the good driver of a goods train decided to practice his engine shunting skills or some other skill on that very crossing. That involved moving the engine back and forth continuously for 2 complete hours, to the dismay and disbelief of every soul stuck there.

He could have done it on any day, at any point in time in his life but he chose that particular moment. You see great laws of nature at work. After coming out of that “Ripleys’s Believe it or Not” moment we found ourselves at the international border. Being there, you would definitely want to applaud our government for maintaining such a cordial relationship with Nepal.

It’s so cordial as if you would feel entering just another state of India, but still, there are some tiny, weeny formalities to be completed. It is mandatory that everybody must get the entries of their vehicles registered and pay a small fee depending upon the period of stay. Having completed those with the help of a tout, whom one can easily avoid and are in abundance, who also guided us the path through Birganj towards Kathmandu, we entered Nepal and soon found ourselves in the cold, the cozy and beautiful lap of the mighty Himalayas.

There was something about this small country that differentiated it from India although both do not have many geographical or cultural differences (if you consider some particular states of India). There was a different vibe than you could only feel if you were there. You could see those faces and feel the happiness in the air. Nobody seemed to be in a rush. The smiles were genuine and calm just like the Himalayas. The mountain country had undergone much turmoil in recent times and had been in news for all wrong reasons. But the citizens define a nation, and the citizens of Nepal seemed not to hold onto their past and had moved themselves to a happier and calmer state, both in psychological and geographical contexts.

Even the old lady with a small shack who served us amazing noodles with egg seemed so happy for whatever she had achieved in her life. The mother-daughter duo shyly conversed with us only in broken Hindi and Nepali but ensured that our tummies were full and our faces happy. One can only but wonder at such instances if we have truly forgotten the secret to be happy. To be content. Is life about achieving something big or being happy and content? What defines happiness? Our insatiable dreams to reach higher or our content soul?

With that and several more thoughts that erupt in your mind when you are staring out of the window into nothing, catalyzed by the slow mountain breeze, we reached Hetuada and decided to take the smaller, less-traveled route (Tribhuvan Highway) as originally planned that connects directly to Naubise, which is just about an hour short of Kathmandu. By the time we started ascending up the winding roads from Hetauda, the Sun was descending below the hills. A few hours later we found ourselves to be the lone travelers on the highway which was wide enough to allow traffic from one side only. Along the roadway were only scarcely populated and candlelit villages whose occupants knew no Hindi or English.

Wondering if we’re lost and logically defending that we mustn’t be as it was the sole road in the region, we soon hit up a military check-post where we were interrogated about our reason of visit and all our documents were checked and returned. But the best part was that they informed us we were on the right path and Kathmandu was just a few hours away. Plying lonely and solely in darkness with all eyes glued to the windscreen we suddenly came to a halt on the side of a curve.

The driver had stopped the car and came out of it. Being curious individuals we too disembarked, relieved ourselves, and started checking tires and other car components to ascertain the reason for our delay. Soon we found out the driver in the back seat of the car, thinking to ourselves he must be checking on some tools. But only a few moments later we were aghast when reality revealed itself. The driver had not slept well before commencing the journey and his owner forced him to undertake tours.

So he informed us that he couldn’t keep himself awake any longer and must sleep for an hour or two before resuming driving. So, at around 9 O’clock in an unknown country, enveloped in absolute darkness with no sight of another soul nearby, we were standing in a previously Maoist inflicted region, wondering if this was really happening to us. After voting against the motion to wait for the driver to wake up, we decided to hand over the wheels to the only guy who could drive even though he had no earlier experience of driving in mountainous terrains.

It was decided to advance slowly but steadily towards Kathmandu otherwise we may not be able to get a hotel in Kathmandu and could strand ourselves for the whole night. So keeping our fears aside but still clutching the handlebar in front, we again started to move. Reaching Naubise was such a relief. Now we were just an hour short of Kathmandu and also converged to the main Prithvi Highway which had wider roads and continuous traffic.

Smile again emerged on our tired faces when we noticed the signs on the boards on shops along the highway had started using Kathmandu in their address. A quick inquiry with a couple of people hanging along the roadside assured us that we had indeed reached our destination.

Those words brought such peace to our weary souls that can never be expressed. It also brought with itself renewed anxiety and excitement that comes towards the end of any journey. We also decided to wake up our driver who had been dozing off for more than 2 hours now as we were entering the city and were at the potential risk of being stopped by traffic police. We again trusted the map on our phones to guide us to the point of rendezvous, Thamel, located at the center of Kathmandu and heart to all buzzing activities.

It was nearly 11 while we were accelerating on the empty roads of Kathmandu and most of the city was fast asleep. We didn’t know what to expect from Thamel but we certainly did grossly underestimate it. Upon reaching Thamel, we were awestruck. The commotion, the people, the shops, the cafes, the hotel, the music, everything was so amazing live and awesomely different.

There were hordes of people everywhere. You name any country and you can find a guy from that country walking beside you. For half an hour we were so much in awe of the place that we completely forgot we had to find a hotel to spend the night. We split into two groups and started searching frantically for a place to stay and in another 30 minutes, we found ourselves checking in into hotel Access Nepal.

Immediately after checking in, we did what any sensible person would do after a 16-hour long road trip. We went to a club. After all, that is what life is all about, that never-ending fire, that insatiable thirst to never stop, never surrender and dance your way through this tiresome life.

The road is always full of lessons, you just need to pick them up. Events in life contrast even the best plans. Being in control is merely an illusion and time and again nature chooses to free us from our delusional selves. But, the trick is not to be disheartened, for success and happiness can only be delayed, not devoid. Tranquility always follows chaos. The serene calmness of the over-looking Himalayas subsided all the stress of the chaotic, dusty roads of Bihar. It resurfaced all the endless zeal in our souls to achieve what we were determined for. The smiling faces of waving children, stunningly beautiful women and the gorgeous landscape turned our frowns upside down. Smiling lips and wandering eyes are the true reflections of a happy soul for whom the journey is the true destination.

Happiness knows no bounds. It is unconstrained, unrestricted, omnipresent. So, travel, travel, and travel until you find yourself and drown your soul in peace and happiness.