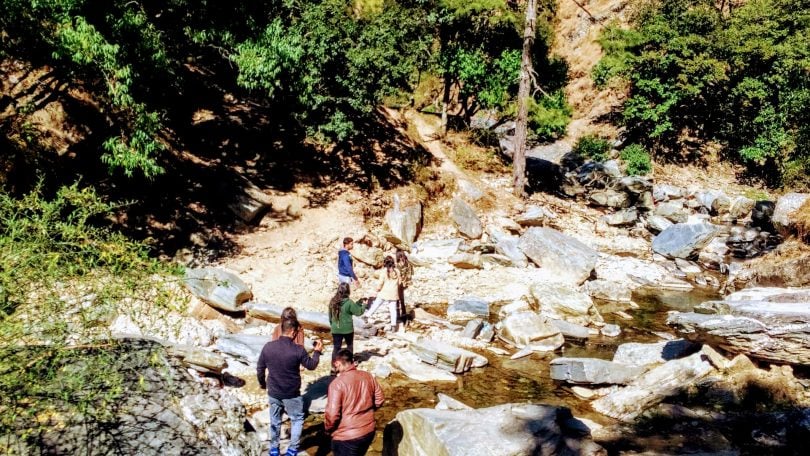 So here’s a comprehensive list of weekend trekking options near Delhi.

Prashar Lake trek is probably one of the most famous weekend treks near Delhi , famous not only for its easy approach but also the immense beauty and varied landscape that Prashar Lake trek offers.

The trek starts from Baggi which is a village in Mandi district of Himachal Pradesh. The trail to Prashar Lake from Baggi is 11 km long and is recommended for beginners thus making it a perfect weekend trek which can be done in 2 days.

The lake is on a hill top and the view from the top is beyond comparisions. You can see one of the best sunsets from there with surrounding peaks changing its colour as per the sun rays.

Best part about Prashar Lake trek is that it is accessible round the year even during monsoon months of July and August. During winter months of December and January the trail remains covered in snow bur the lake remains accessible.

Nag Tibba trek is situated close to Mussorie, Uttarakhand. The trek to Nag Tibba (Serpent’s Peak) takes you to a height of up to 3000 meters and starts from Pantwari village.

If you are planning for a trekking to do on a weekend ? Then Nag Tibba trek makes it for an idle trek. An easy trek which takes you up to the highest peak of the Nag Tibba range of Garhwal Himalayas, known as the Nagtibba summit.

Passing through the thick oak and deodar forests reaching atop the peak you will be welcomed by picturesque views of the ‘Swargarohini Peak’, ‘Bandarpunch Peak’, ‘Kedar Nath Peak’, ‘Kala Nag Peak’ and ‘Gangotri’ group of peaks.

Similar to Prashar lake trek , even Nag tibba trek remains accessible throughtout the year. During peak winter of December and January when there is heavy snowfall the summit becomes inaccessible else the trail remains open.

Being an easy trail and a weekend trek a lot of trekkers during the winter months who want to enjoy snowfall or the snow frequents Nagtibba.

Ascending up to a height of 3300 meters, this 16 km of trek from Narkanda close to Shimla in Himachal Pradesh is another good weekend trek from Delhi. Walking under a continuous shade of conifer, deodar, fir, spruce and moru trees you reach half way up the ridge to find a small pond.

Stop by to freshen up ,  wash your face and capture the moments in your lenses before you proceed further to Hatu Peak. From the top you get to savour 360 degree views of snow-capped peaks, sprawling valleys and rustic villages perching in the hills.

Un-noticed the time will flow and soon you will have to head back home but you will be taking this view back home that’s gonna live with you forever.

The Chopta Tungnath Chandrashila Trek is accessible round the year even during the monsoon months of July and August. The route to Chopta from Rishikesh is landslide prone zone so their might be some road blocks else the trail remains accessible.

The maximum altitude reached on this 12 km trek is 4000 mts and thus make it a best choice for trekkers who are planning for weekend or extended weekend trek.

Starting from Okhimath the trek take you to Deoria Tal, Chopta,  Tungnath ( which is the highest Shiva Temple) to finally reach the summit of Chandrashila which is at 4000m. On reaching the top you will get to see the  panoramic vistas of the majestic Himalayas. A 360 view from the top is one of the best sight to see.

Take endowments at this highest temple dedicated to Lord Shiva ( Tungnath) and enjoy the view of Chaukhamba, Kedarnath, Nandadevi and Trishul peaks which are visible from the trail and on reaching the Chandrashila Summit.

The altitude of the trek and its accessibility make it one of the most sough after trek on extended weekends.

Triund Trek  is another famous trek when it comes to weekend treks from Delhi, it is very popular with the first time trekkers and collge students.

Starting from the Tibetian town, Mcleodganj near Dharamshala in Himachal Pradesh, Triund trek is a short 12 km trek which takes you through a trail lined up with pines, deodars and rhododendrons on both the sides.

Beside this your soul is blessed with stunningly sky rising peaks of Mun, Rifle Horn, Arthur’s Seat and Slab. Being an easy trek you get to see a lot of trekkers on this trail, Triund also acts as the base for other treks like Ilaqa Pass and Indrahar pass trek which are 1 and 2 additional day treks from Triund.

The best and most memorable part of triund trek would be panoramic view of Kangra valley and you get to spend the night under million stars which are vey much visible on clear sky nights.

When I say Lansdowne a thought would pass across your mind and you will question yourself like SERIOUSLY! Lansdowne has a trek to? Well, the answer is yes. Lansdowne is not just a place loved by Britishers in the past but has kept its nature’s legacy even today.

On offer are a plenty of day hikes to choose from like a walking up to the Tiffin Top for a magical views of Himalayas. A walk on the town streets itself will give you a feel of trekking amidst thick pines as cool air caresses your hair and the view of Mt. Chaukhamba and Trishul leaves an imprint on your mind.

So these are the six chosen weekend trek though the list won’t ever end, you weekends are well sorted if you start with these weekend treks from Delhi.

Open almost all through the year the above mentioned treks will suit your spontaneous plans. Guess what? You won’t even feel tiresome on returning home as they are all graded as easy level treks and some are even perfect for family hike too.

So what’s the wait for? Set on the enthralling adventure that will set you up for weeks to follow until you head out on another one.