Home » Regions » Rajasthan » 15 Must Visit Places In Rajasthan During Winters 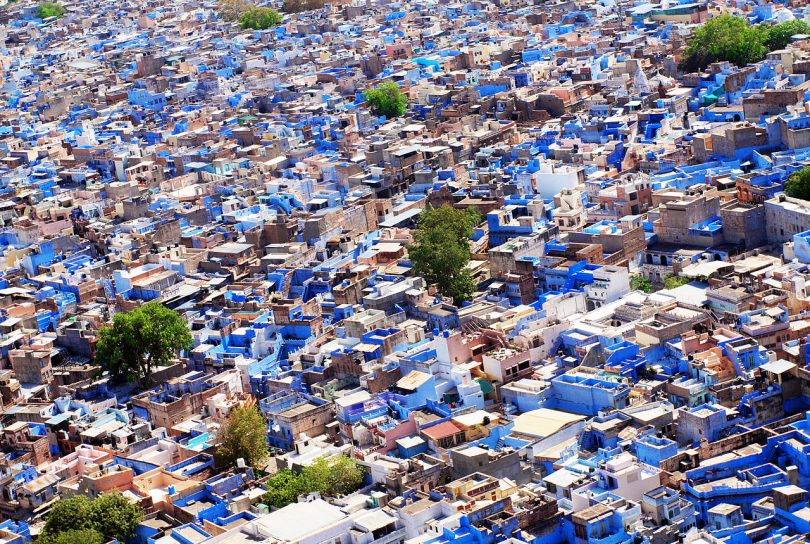 What comes to your mind if you hear Rajasthan? Folk dance! Spicy food! Camel and deserts! Well Rajasthan alongside all these things, has many other things to offer. Rajasthan, the land of the braves, with warm hearts, always invites visitors with open arms and having a welcoming tagline which says, Padharo Mare Desh (Come to my land) and definitely there are many must-visit places in Rajasthan that can be planned for in Winters.

Let us talk about Rajasthan. It is a north Indian state and is also referred to as the ‘Hot State of India’. If you have a question that why one should go and visit Rajasthan! Then the answer would short and simple, which is, to experience the life of the Royals. Rajasthan has been always the royal state of India and has a lot of history to it. There is a countless number of forts, palaces, and Havelis which boosts the Rajasthan tourism. The royals of the state defiantly left out a lot behind them for visitors to cherish, for example, Amer Fort, Chittorgarh Fort, Jaisalmer Fort, and the list goes on.

The land of the Royals also has the food of the Royals. Rajasthan serves one of the most unique cuisines in India. If you love eating spicy food the Rajasthani cuisine is a must-try, for example, Dal Bati, Gatte ke Sabzi, Mirchi Bada, and whatnot.

Oh! But wait. Do you think Rajasthan is all about Royal life? Well, the majority part of it is but not all. So what about the rest?

Here are the 15 places to visit in Rajasthan during Oct-March (because that is ideally the recommended time period to travel the royal state.):

Starting with the capital city of Rajasthan, that is Jaipur. The city is also popularly known as ‘Pink City’. Why? That is because of the trademark colours of its buildings. It is the largest city in Rajasthan. The city of Jaipur was founded by Jai Singh in 1727.

What Not To Miss: The palaces and the mahal. Jaipur offers you a mesmerizing tour into different palaces and Mahals which are considered very popular tourist destinations in India.

To name some, Amer Palace, Hawa Mahal, City Palace, Jantar Mantar, and Jal Mahal. Especially The Jal Mahal, it’s a unique Mahal in the middle of the Man Sagar Lake and attracts a lot of eyes towards it.

Udaipur used to be the capital city of the Mewar Kingdom. The city was founded by Maharana Udai Singh II in 1559. The capital city of Mewar has many artificial and charming lakes and of course the royal residences which attract a lot of eyes from around the world.

What Not To Miss: Udaipur is known as the city of lakes and the most famous lake of Udaipur, Lake Pichola, gives a lot of experiences at once for tourists. Wonder how? Well, City Palace, Lake Palace, Jag Mandir are some of the important tourist destinations in Udaipur and are all situated around Lake Pichola and a must-visit place in Rajasthan during winters.

One can take the boat rides to have an experience of Lake Palace, built of white marbles. Currently, the palace is now a luxury hotel.

One should also visit Fateh Sagar Lake; an artificial lake situated in the northwest part of Udaipur and was built by Maharana Jai Singh.

Refer to our fixed departure of Rajasthan Backpacking Trip.

Jodhpur was the capital city of Marwar. It is a city in the Thar Desert in Rajasthan. Popularly known as the ‘Blue City’ or the ‘Sun City’. Again, why? It is because of the colour of the buildings there. Jodhpur has many eye-catching things to offer like countless palaces, forts, and temples.

What Not To Miss: One of the most famous and important forts of Jodhpur, The Mehrangarh Fort attracts a lot of tourists every year. Currently, the fort is turned into a museum and it displays the weapons, artworks, and royal chairs.

One should also visit the Umaid Bhavan Palace, Jaswant Thada, Bal Samand Lake, and the Ghanta Ghar (Clock Tower). Adding to the palaces and lakes are the markets of Jodhpur which gives you the taste of Rajasthan by having the best Rajasthani cuisines and traditional clothes and shoes.

Jaisalmer, also known as the ‘Golden City’ because it stands on the ridge of yellow sandstone. The Jaisalmer Fort inside contains a royal palace and Jain temples. The city of Jaisalmer lies in the center of the desert.

What Not To Miss: As already mentioned, The Jaisalmer Fort, one cannot just miss the fort. It is situated on the Meru Hills and was built by Bhati Rajput Ruler Jaisal in 1156.

Adding to the fort, must-see, Patwa Haveli, Salem Singh Ki haveli, and the Nathmal Ki Haveli. Jaisalmer has a lot more Havelis for its visitors’ experience and is a must-visit place in Rajasthan during winters.

Pushkar is a city in Ajmer district that has hundreds of temples and is situated on Pushkar Lake, a sacred Hindu site with 52 ghats. It is considered a sacred city by the Hindus and eating meat and eggs is forbidden in the city.

What Not To Miss: Pushkar is the city of temples and hence a dream place for devotees. Some temples that are a must-visit are Brahamji Temple, Savitri Mata Temple, Varsha Temple, and the list goes on.

One cannot miss the Pushkar lake where the city of Pushkar is situated on. Many devotees take a holy bath at the ghats of the Pushkar Lake.

Mount Abu is a hill station in Rajasthan near the Gujrat border. It is based on the Aravali range in Pinduara. The highest peak on the mountain is Guri Shikhar. It offers a cool temperature as compared to other cities of Rajasthan.

What Not To Miss: People who love to do boating can try that out in Nakki Lake, a popular spot for boating. The city is also home to many Hindu temples like Adhar Dui Temples, Dilwara Temple.

To capture some scenic views one should visit the Toad Rock, Sunset Point, and Honeymoon Point.

Bikaner is a city surrounded by the Thar Desert. The city is popular for the 16th Century Junagarh Fort. The city was founded in 1488 by Rao Bika.

Today it is the fourth largest city in Rajasthan. Since it is situated in the heart of the Thar Desert, it has a hot desert climate with almost no rainfall.

What Not To Miss: Bikaner is another land famous for forts and palaces and some famous forts and palaces that you just cannot miss are, Junagarh Fort, Lalgarh Palace, Rao Bikaji Fort, Karni Mata Temple. All these places catching many years every year.

Chittorgarh used to be the capital city of the Sisodia Rajput dynasty of Mewar. The city is the home to Chittor Fort which is the largest fort in India and Asia.

Also, the story of Rani Padmini which was also depicted in a Bollywood movie, Padmavat, was from the city of Chittorgarh.

What Not To Miss: Chittorgarh a major city of Rajasthan, popular for the forts and palaces has a number of them for the visitors to experience. The most popular is the Chittor Fort, the largest in India and Asia.

Then you must visit the Vijay Stambha, a 9-story tower of victory is built from red sandstone and white marble. Then the mahals of Rani Padmini and Rani Kumbha.

Mandawa, a town in the Jhunjhunu district of Rajasthan and is known for its fort and Havelis. The town is also popular because of a Bollywood film Pk which was shot there. The town was made by Thikana in the mid 18th Century.

What Not To Miss: A popular town for Havelis, one will get a load of experience of royal Havelis from this town of Mandawa, if to be named some like, Snehi Ram Ladia Haveli, Chikhani Haveli, Seth Dayaram Dedraj Goenka Haveli, and many more in the list.

Bharatpur, a city located in eastern Rajasthan, has a Government museum, which displays artifacts of local Rajas. It is also a land of countless Hindu temples, forts, and bird sanctuary.

What Not To Miss: The south of the Bharatpur City has Keoladeo National Park which is a huge bird sanctuary and has a hundred species. Another is Bharatpur Bird Sanctuary.

Also to experience the forts, one can visit Lohagarh Fort and the popular Laxman Mandir cannot be missed either.

Bundi is a town in the Hadotti region of Rajasthan, is popular for some royal residences too like beautiful forts and palaces.

What Not To Miss: One should visit the Raniji Ke Baori, built-in 1699 by Rani Nathawati. Visit the Sukh Mahal for beautiful and natural views. Also one can visit some popular forts like Taragarh Fort and Garh Palace.

Alwar, popular for forts, Havelis and lakes was a part of the Masaya Kingdom, an ancient Mahajanpadas. The Alwar city palace, located centrally is a great spot for history nerds.

Also, must visit the Bala Quila, known as the Alwar Fort, Siliserh lake for some scenic views, and the City Palace which is also known as the Vinay Vilas Mahal. It depicts great Rajputana and Islamic architectural styles.

Neemrana, an ancient historical town in Alwar now has also become an industrial hub but is a must-visit place in Rajasthan during winters especially for travelers around Delhi – NCR looking for a weekend getaway. The current ruling family is considered to be of the direct lineage of Prithviraj Chauhan.

What Not To Miss: The town is located in the center of the ‘Golden Triangle’ and one has to visit the Neemrana fort. Although the fort, now is converted into a luxury hotel. It was built in 1464 AD

The city of rajsamand is named after the popular Rajsamand Lake, which was built by Rana Raj Singh of Mewar. It is an artificial lake created in the 17th Century. The city is also famous for being the birthplace of Maharana Pratap, a popular Mewar King.

What Not To Miss: Rajsamand is a city that is beautiful and eye-catching in itself since it is surrounded by Aravali Ranges.

But Also some of the popular touristy attractions are the Haldighati, the famous battlefield, Dwarikadheesh Temple, Charbhuja Temple and not to forget the boat ride in Rajsamand Lake.

The city of Nagaur lies between Jodhpur and Bikaner and is popularly known for spices. It also has some rich history tales and just like many other cities, Nagaur has countless forts, palaces, and temples. This city is a must-visit place in Rajasthan during winters for history nerds.

What Not To Miss: Visit the Nagaur Fort, it gives a perfect blend of Jat-Mughal architecture. The Jayal- Dadhimati Mata temple, Merta- Meera Bai Temple, and the Kuchaman Fort, the oldest fort of Rajasthan. The fort offers some beautiful scenic views of the whole city and currently, it is converted into a luxury hotel.