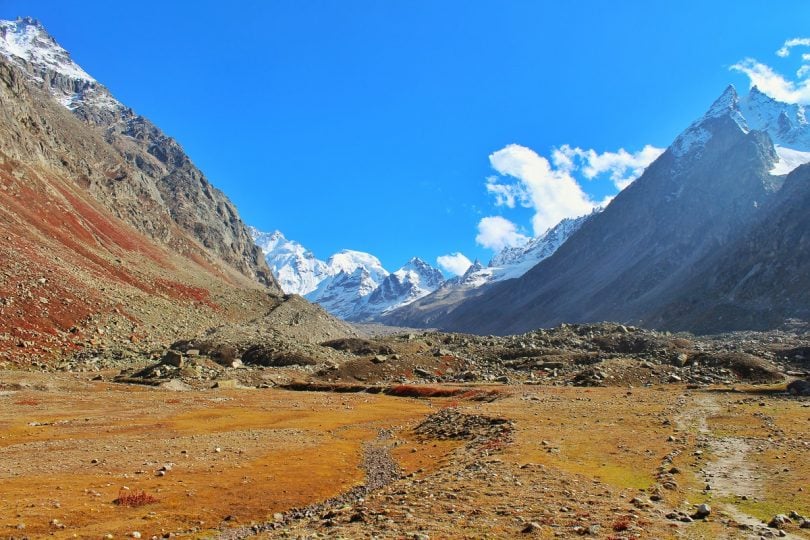 There are several beautiful and amazing treks in Himachal Pradesh such as Pin Parvati Pass, Hampta Pass, Beas Kund, Bhrigu Lake, Bara Banghal, etc. Out of all, Hampta Pass is the most popular trek due to its moderate difficulty, less duration, and amazing views. As the Hampta Pass Trek Itinerary is of 5 days ,we made the plan on the Dussehra Long Weekend.

Reached Manali on the 28th of September and there I met with my group and the guide. From there, we started our Journey to Hampta Pass as per the Itinerary. We drove towards Jobri via Prini village, which was the starting point of the trek. The drive was 2 hours long but was scenic.

The view of Kullu valley from the road was great. We could see the whole of Manali town while driving. 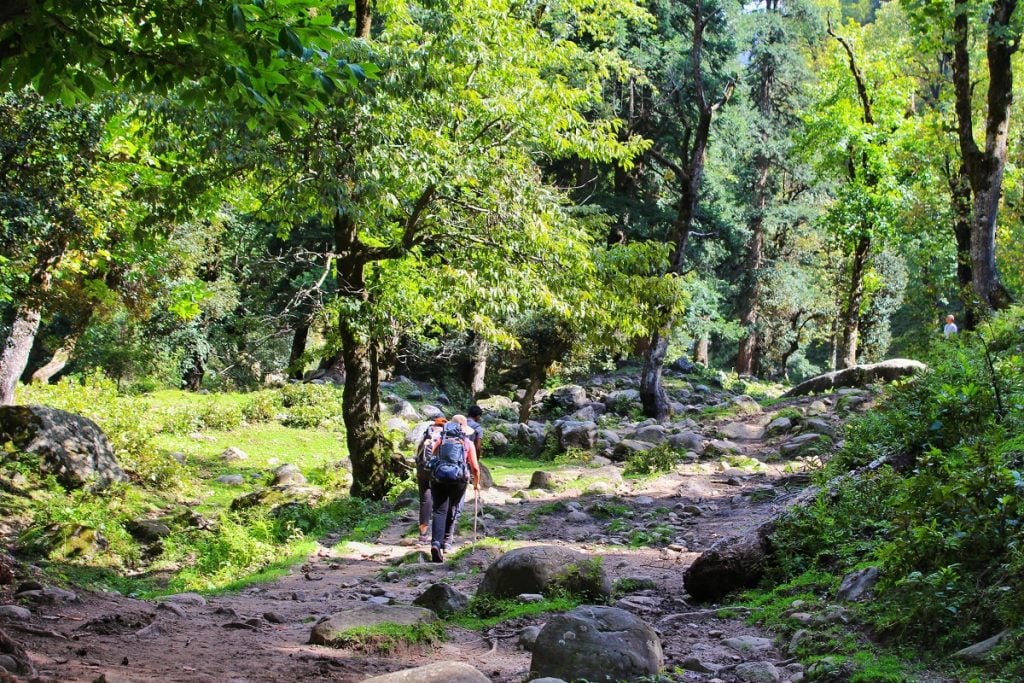 We reached Jobri at 12:00 hrs and there was no one except us. We checked our shoelaces, applied sunscreen, filled our bottles, and then started our trek. We entered the forest having lofty peaks on both sides. After walking for 15 minutes, we passed a waterfall and continued on the same route. The trail was uneven, narrow and was slightly uphill.

The walk through the woods continued for about one hour and then we arrived at a small open meadow. There were some horses grazing the meadow grass. We kept walking straight and just after a few steps, we saw a huge and beautiful valley.

The river flowing through the valley was Rani River. There was a small shop where we stayed for a little and then resumed our trek. 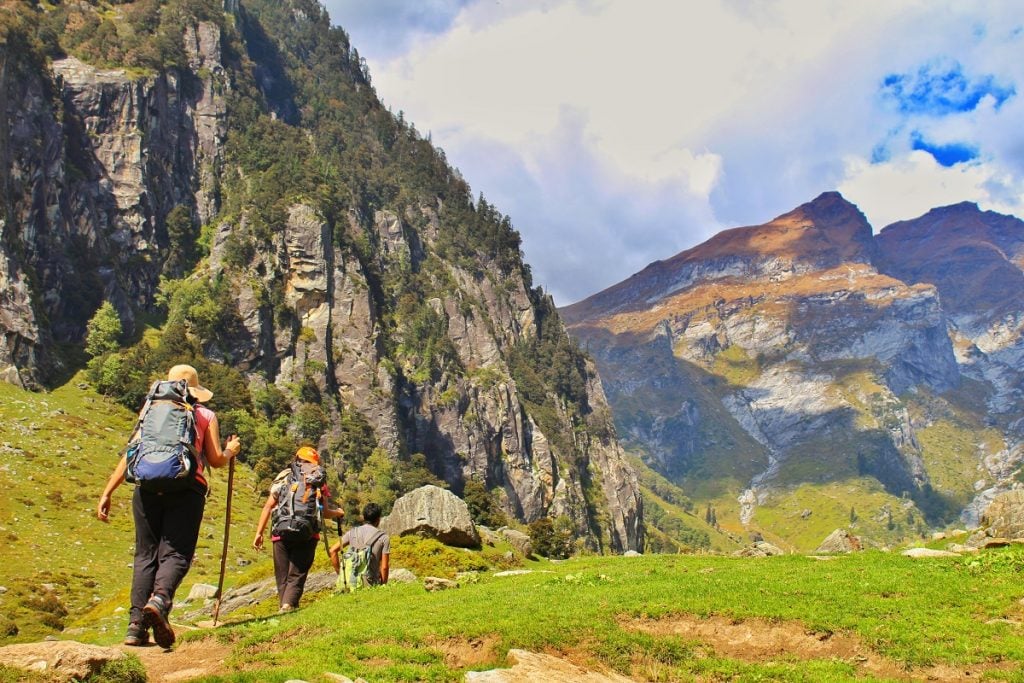 We took the downhill route, crossed a bridge over the Rani River and we were at the core of the valley. The valley was lush green and had large boulders on the way to Chika campsite.

We were enjoying the trek because of the amazing views, lofty mountains, a soothing sound made by the Rani River, and the weather. 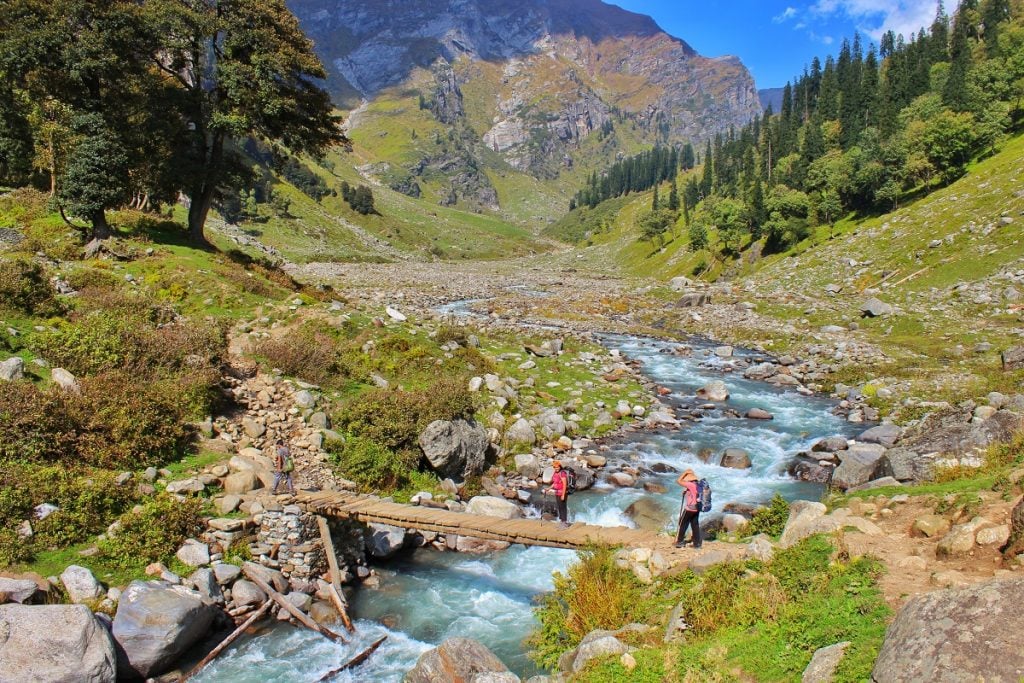 Reached our campsite at Chika at around 4 PM and had a piping hot tea and Maggi. The kitchen staff was so amiable and helpful. The weather was following the mountain code.

As the twilight was approaching, the weather was getting cold with the chilled air. We had to add one layer to our body. The night was quite cold and calm. We did star gazing for about 15 minutes after having dinner and then slept.

Woke up with a cool morning at around 0700 hours. We got ready and were waiting for the breakfast and the Sun. Due to high mountains, the sun came up too late.

We had our breakfast of Omelet and cornflakes and then began our 2nd-day Hampta Pass trek itinerary. Now, we were approaching Balu Ka Gera campsite which was around 8 km from Chika. 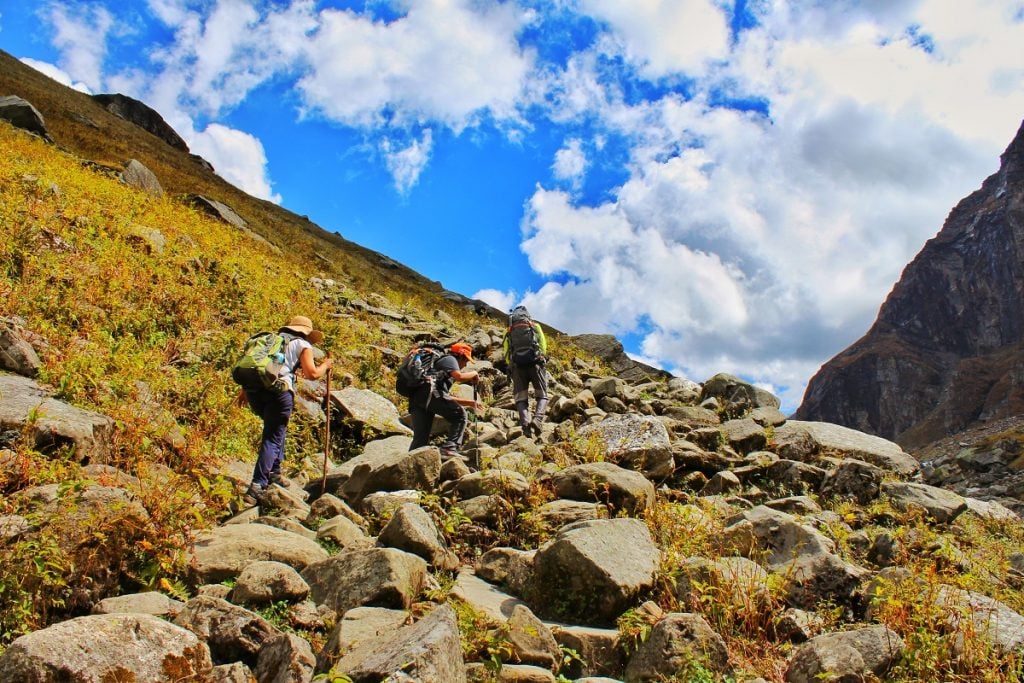 We followed the upstream Rani River and continued our trek in the valley. The trail was mostly uphill through the big boulders and soon we turned right along the valley. We climbed about a few meters and saw a massive waterfall on our right side.

The route had some tricky sections too that we negotiated carefully. After passing the waterfall, we reached the meadow and from there we could see the mighty Indrasan massif right at the front of us. The further walk was mostly flat through the vast meadows.

We also saw a huge herd of goats and sheep there.

After all this, we arrived at a point where we had to do some real adventure. We had to cross a river. Without thinking too much, we took off our shoes, fold our pants and started crossing. The water was cold like hell.

Our feet got literally numbed and the flow was also strong. It was getting difficult to maintain the balance but we successfully crossed it. Then we did some exercises to make our feet warm. The further trail was almost on the flat land except for the last section which was full of small and big boulders. We reached the campsite at 3 PM.

We were lucky enough because just after reaching the campsite the weather started getting changed and in another hour rain started with mild snowfall. The night was chilling as the temperature went below zero degrees. We slept early because the next day was the D-Day as per our Hampta Pass Itinerary.

We had to cross the Hampta Pass, so we planned to wake up and start early. 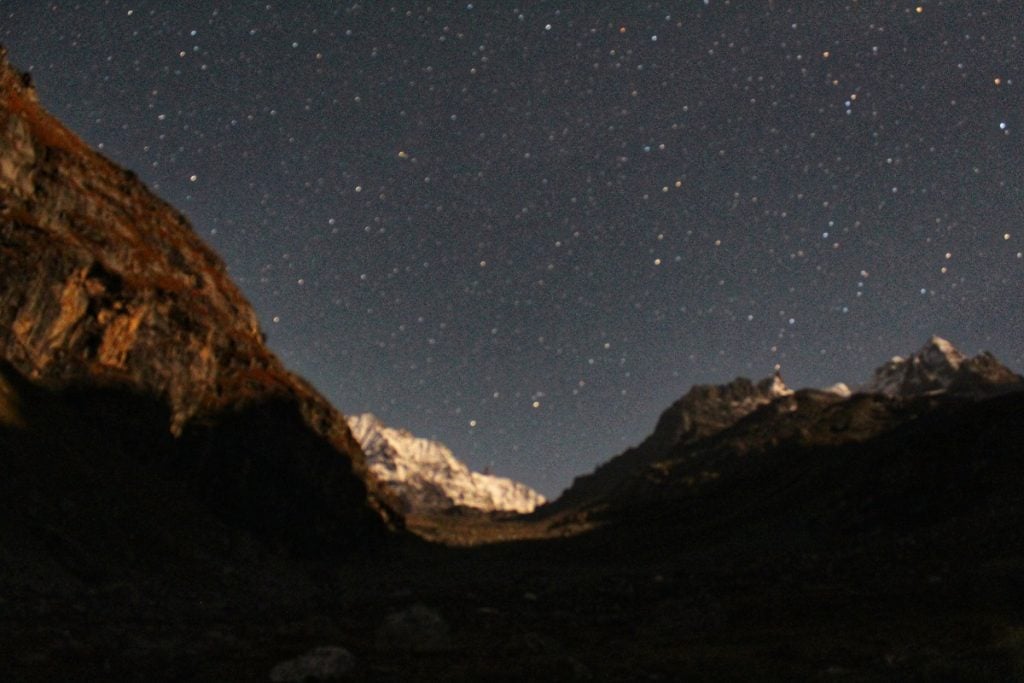 Night Sky from the campsite

As per the itinerary, we began our trek by 0700 hrs. The pass was 2 km far from the Balu ka Gera campsite. The trail was brimmed with boulders and it was quite steep. We were having a little problem in breathing as the air was getting thin due to altitude.

We ate our packed lunch at the pass and spend some time there because the weather was good. 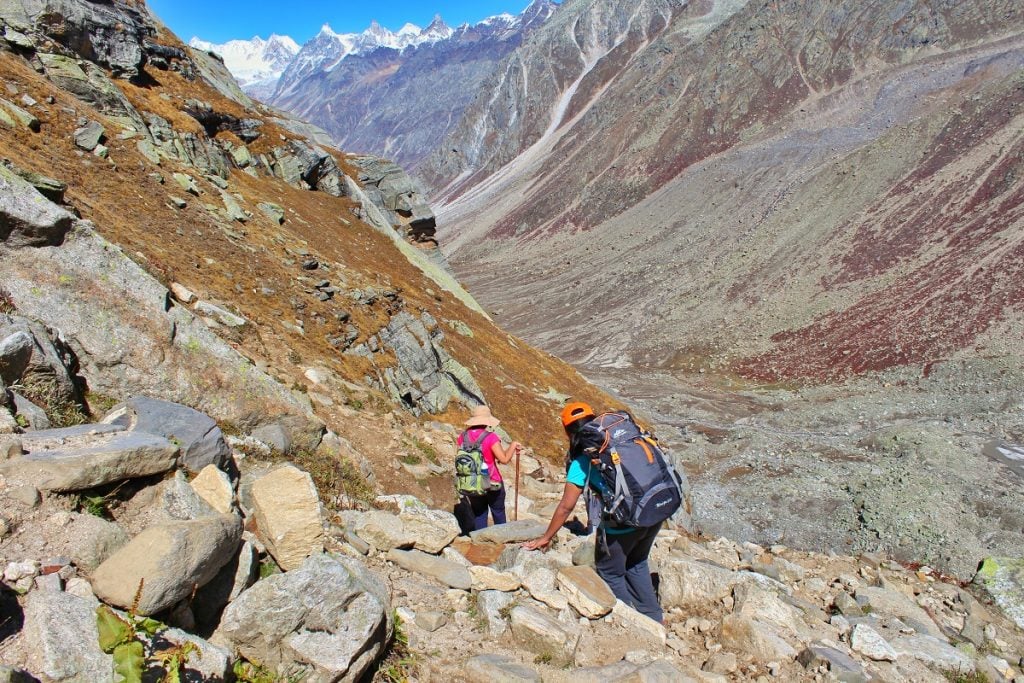 Coming down from Hampta Pass

Now the further trek was all the way descending. Our next stop was Sheagoru. We took the downhill route and started descending. The descent was also quite steep and was full of scree & loose stones. It took us 3 hours to reach the campsite. The campsite was scenic.

Our tents were pitched near the Sheagoru river. Now we were all free as we had accomplished the task of the day. We played cards and had the bonfire in the evening. The night was extremely cold. Our guide had already told us that Sheagoru is the coldest campsite.

Today was our last trek day but we were still excited as we were going to visit one of the beautiful lakes in the country, Chandratal. The trek was only 3 km long but the starting was tough as we had to cross the icy-cold Sheagoru River.

We again successfully crossed the river and continued following our trek Itinerary without any further stops. Reached Chattru at 12 PM and had our lunch. We were getting ready for Chandratal and got the news that the taxi would reach by evening as it got stuck in jam.

So we altered the plan and planned to visit the lake in the early morning. 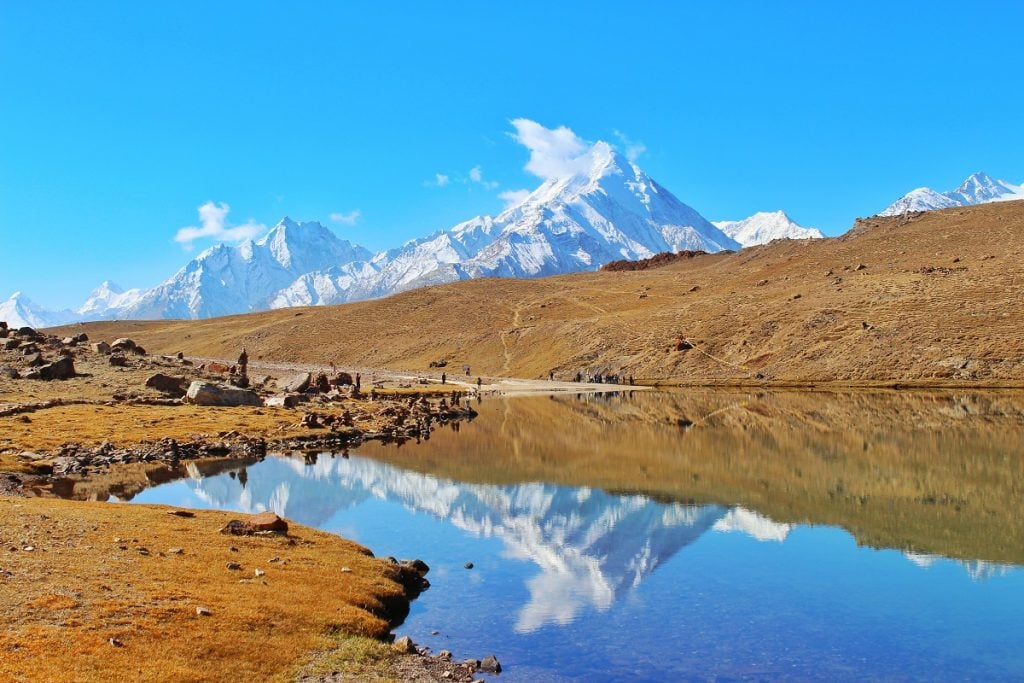 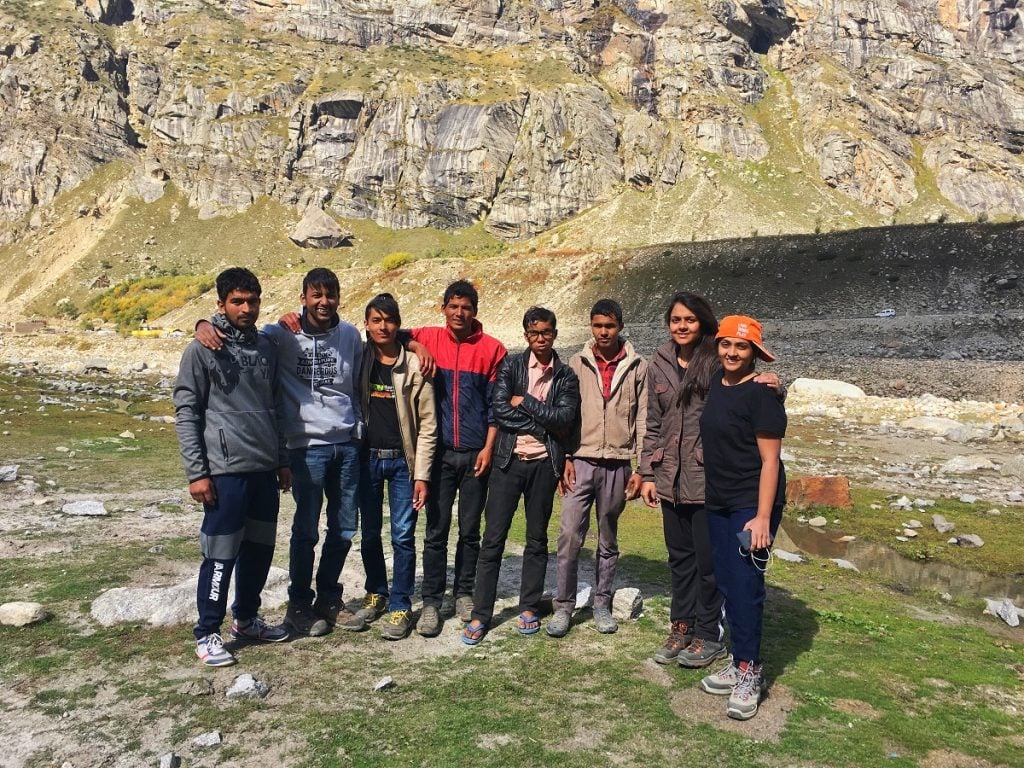 Group after completing the Trek

Day 5: Visit Chandratal and Drive back to Manali

Today was our last day of Hampta Pass Itinerary , so I woke up at 2 AM, got ready, and departed at 3. It was totally dark and we were traveling on one of the treacherous roads of the world. The drive was tough but totally worth due to the amazing views of the Spiti Valley. Reached the moon lake at 7 AM. We got amazed after seeing the lake. It was spectacular. The water was crystal clear, showing the colors of the sky.

The lake was encircled by snow-capped mountains. The magnificent Chandrabhaga massif was enhancing the beauty of the lake. We captured so many shots and then left for Manali. We crossed the Rohtang pass and reached Manali in the evening at 6 PM.

Later, we said goodbye to the guide & other staff and finally boarded the bus to get back home.