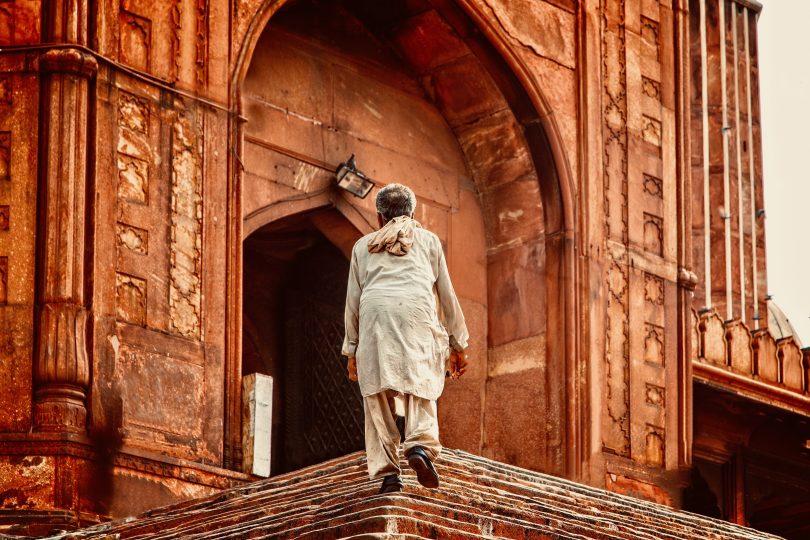 Most of our backpacking trips and weekend getaways have Delhi as a pickup destination.

Mostly because the capital serves as the perfect rendezvous point for a group assembly and traveling is convenient to most hill stations from here.

Although it’s not entirely possible to visit all the best places in Delhi in a day, we can help you choose the ones that you simply can’t miss out on.

Instead of just merely suggesting you some of the most popular attractions of Delhi, we will also be sharing some interesting facts about each and every place that a lot of people, including the locals, don’t know.

Since Delhi metro is the most convenient transportation available, it’s only natural that we tell you about the metro route, nearest stations as well as the cheapest way for unlimited traveling in Delhi for a day that a lot of people including Delhites themselves are unaware of.

First things first, let us tell you how you can spend your day in Delhi by traveling to all the best places at just 100rs!

Most people while traveling in the metro use tokens as they are easily available and can be used for a single, one-way journey.

Daily commuters use their travel cards as they are convenient if you are a frequent traveler.

But if you are staying in Delhi for a day, then it doesn’t make sense for you to get a travel card as it won’t be of use to you when you get back home and tokens would be too much of a hassle, because you will have to get a new one for every destination.

Thanks to Delhi metro, tourists get special metro cards called “Tourist cards”  that allow them to travel on all DMRC routes except Airport lines. These cards are perfect for unlimited traveling for a short duration of time and cost only 150 INR!

From which 50 INR is the security amount which will be refunded when you return the card after your tour. To read more about the terms and conditions, you can check out this link here.

Now that you don’t have to worry about expensive fares and reluctant auto wale bhaiyas, you can explore Delhi to your heart’s content. And these are the places that you must visit in Delhi:

Residing in the heart of Old Delhi, Jama Masjid is one of the largest mosques in India and is considered to be the best among all mosques built during the Mughal Empire.

There are three archways made of sandstone accompanied by separate stairways. The courtyard has the capacity of accommodating 25000 worshippers. Muslims from all over the city come here to offer their communal prayers each Friday and on the festival of Eid.

The floor of the hall is made up of black and white marble ornaments and resembles a prayer mat.

The cabinet in the north gate has a collection of sacred relics that belonged to Prophet Muhammad which includes the Quran written on deerskin, the sandals of the prophet and a hair from his beard along with a block that has his footprints.

After paying your reverence at the mosque, you can explore the lanes of Meena Bazaar, try the famous butter chicken at Aslam Chicken Corner or feast on the Shahi Tukda at the Cool Point.

Interesting fact: It is believed that back in the day famous poets like Ghalib, Mir Taqi Mir and others used to sit and recite poems on the steps of Jama Masjid and avid poetry lovers would gather here to listen to their couplets.

One of the top heritage structures in the capital, Connaught Place commonly known as CP, is one of the most expensive commercial hubs across the world. It’s the most major nightlife, shopping, social and tourist attraction in New Delhi.

From brand stores like Van Heusen, Louis Phillipe, Jockey to the underground shopping complex of Palika bazaar, CP has everything to satiate the urges of shopaholics as well.

With more than a hundred restaurants and cafes, you will find a wide variety of cuisine at your disposal and the aesthetics of all these places are to die for.

You can take a stroll in Central Park and see the second largest National Flag hoisted at the center of the park or visit Agrasen ki Baoli which is a 14th century stepwell. The Gurudwara Bangla Sahib is also a 15 minute walk from CP and is one of the must visit places in Connaught Place, Delhi.

Interesting fact: The construction of Connaught Place took 4 years. The government intended to build the New Delhi Railway station inside the Central Park but the ridiculous impracticality of the idea didn’t sit well with the railway authorities and hence the idea was dropped afterwards.

The canal that flowed through the middle of  the market, dividing it in two directions back in the day, reflected moonlight which is how Chandni Chowk got its name.

Presently, India’s largest wholesale market, the original Chandni Chowk was a half moon shaped chowk in front of the Municipal Townhall and had three bazaars designed and established by Shah Jahan’s favorite daughter Jahanara begum.

The shops too were built in half moon shaped patterns but are now no longer to be found. There were many havelis in different wings and some of them are still preserved in good condition and are accessible to people like Mirza Ghalib ki Haveli, Chunnamal Haveli, Begum Samru’s palace which is now called Bhagirath palace etc.

Chandni chowk also has many religious shrines belonging to different religions which you can visit like Shri Digambar Jain Lal Mandir , The Central Baptist Church, The Gurudwara Sis Ganj Sahib, The Fatehpuri Masjid and more.

If you are in Chandni Chowk, then you simply can’t miss the food here as the market is home to many notable restaurants and halwais. Some of them were established more than a decade ago. The most popular is of course Paranthe wali Gali which has shops dating back to 1875.

You can buy saree’s, unstitched fabrics, jewelry, itr and so much more from the market as the options are endless.

Interesting fact:  Chaurasi Ghanta Mandir, which is one of the most famous temples among the locals, derives its name from the fact that the 84 bells tied by a single string in the temple chime in unison. It is believed that the bells are a symbolic representation of the belief in Hinduism that a soul has to take birth 84 lakh times in different bodies before being born as a human being.

Shah Jahan is applauded for his architectural achievements. The Red Fort, also known as Lal Qila that served as the main residence for the Mughal Emperors, is one of the Mughal architectural marvel that stays as a reminder of the golden age of Indo-Islamic architectural style that developed from 16th to 18th century. The fort derives its name from the red sandstone walls that it’s built from. In 2007, it was declared a UNESCO world heritage site.

You can marvel at the intricate designs of the pavilions, buy trinkets and souvenirs from Chatta Chowk Market which you can get to by getting past the Lahori Gate and try a wide range of cuisine including fast food.

Interesting fact: According to Professor Inayat Khan who wrote the book “The Shahjahannama” based on the life of the fifth Mughal Emperor, the expenditure spent on the construction of Red Fort was that of sixty lakh rupees and it took more than nine years for the Fort to be completed.

Often compared to Gateway of India in Mumbai, India Gate is considered to be the biggest war memorials in India. The 138 foot tall gate has the name of 13,300 servicemen inscribed on it. Among the dead soldiers who were commemorated, the name of a female staff nurse who was killed in action is also inscribed on the gates.

The foundation of the structure was laid a hundred years ago and today it serves as one of Delhi’s most popular tourist attractions. There was a time when cars used to pass through the gate until it was closed.

The Amar Jawan Jyoti, a structure consisting of black marble plinths, a reversed rifle with a war helmet bounded by four eternal flames was built beneath the archway in 1972 and the light in each urns are always burning to signify the immortality of the soldiers.

Mornings at Delhi’s India gate start with a game of cricket or football. The lush green park stretching like a carpet in front of the India gate provides the perfect spot for a picnic or a stroll. If the weather permits, you can take a boat ride. There are hawkers selling bhutta (roasted corn on cob), chuski (flavored ice ball), papad (thin fried wafer) and other appetizers that will take you back in time and relive the 90s nostalgia.

Interesting fact: There is a staircase consisting of 300 steps inside the gate which can take you to the top of India Gate. In 2015, a photographer asked a commanding officer if he could find a good vantage point to click pictures of the capital. He was given permission to go inside the gate to click photographs from the top. He was later praised for the rare photos that he clicked.

The fluted Minaret and victory tower which forms part of the Qutub Complex is one of earliest mosque complexes that survives in the subcontinent and dates back to the 11th century.

Erected at a height of 73 meters, it was declared a UNESCO world heritage site in 1993.

The complex is home to the masoulems of two Sultans, Sultan Iltumish and Alauddin Khilji respectively. The Iron Pillar in the courtyard bears an inscription in the Brahmi Script which belongs to the golden age of early medieval periods while the carving on the pillars are verses of Quran.

You can visit the Quwwat-Ul-Mosque, click some insta-worthy pictures in the lush green gardens which provide a stunning backdrop to the complex or collect souvenirs from the local hawkers.

Interesting fact:  Just like The Leaning Tower of Pisa, the structure of Qutub Minar has been leaning to one side for a few years now. According to a report from 2016 which cited the Survey of India as a resource shared that after enduring lightning strikes, earthquakes and deepwater seepage, the Qutub Minar has already tilted 65 cm away from its vertical axis.

Bonus: Things to do in Majnu Ka Tila

Since, the pick up point for our journeys is often Majnu ka Tila and most people don’t have a lot of hours to explore the diverse lanes of Delhi, we thought we’d share a small guide to the Mini-Tibet that was established back in the 1950’s in the capital and houses a small community of Tibetan people who settled in this colony years ago. Here are some things that you can do in Majnu ka Tila to spend time.

Now that you don’t have to worry about how to spend a day in Delhi during your halt hours, you can start planning for the best treks, backpacking tours and weekend getaways from Delhi.