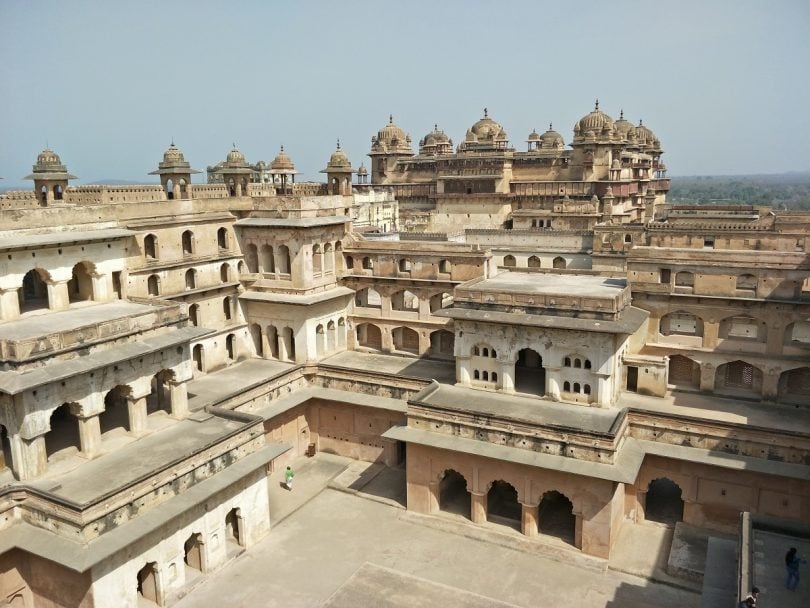 Written by Just Wravel
1 .What is the best season to visit MP?

Ans: October to February: Winter is the best time to visit Madhya Pradesh. During this time, The days are pleasant and nights are cold.
April to June: You will experience hot weather during this time. So it’s better to avoid MP in summers.
July to September: Monsoon is the best season for budget travellers. When you will get accommodation and transport at a budgeted price. Because you get lots of discounts during this season.

2. What are the places from where we can shop during the Madhya Pradesh trip?

3. How many minimum days are required to explore MP?

Ans: Madhya Pradesh has plenty of places to visit. If you want to cover all famous tourist attractions then you will be required at least 7 to 8 days. But you have less time then you can visit region-wise.

4. What kind of Vehicle will you provide during the trip?

5. What is the nearest airport for MP?

6. What is the nearest railway station for MP?

7. What is the local food of Madhya Pradesh?

Travelling in Madhya Pradesh is safe for solo travellers. As is with most places, it’s recommended that you inform the hotel about your whereabouts and keep emergency numbers handy. It’s also advisable to keep your phone charged at all times and not travel alone at night.

10. What activities can I do in Madhya Pradesh?

Ans: You can try various adventure activities during the MP trip such as River rafting in Orchha, Cable car ride in Orchha, wildlife safari in Bandhavgarh National Park and other parks and trekking in Ralamandal Wildlife Sanctuary and Amarkantak Forest.

11. What should I pack for a trip to Madhya Pradesh?

Ans: It depends on which season you are travelling and the places you are covering to Madhya Pradesh. Here is a list of five necessary essentials for your trip.
Mosquito repellant, A light jacket, A scarf, Prescription medicines, Two pairs of walking shoes, Sun Protection Cream, A water bottle, bag pack, Charger, Power Bank, etc

12. What are the major attractions of Madhya Pradesh?

15. Which are the best historical places to explore in Madhya Pradesh tourism?

Ans: Madhya Pradesh is a good choice for history lovers. Some of the best historical sites in MP are the temples in Khajuraho, Gwalior Fort, Sanchi Stupa, Bhimbetka Rock Shelters, Burhanpur and Bir Singh Palace.

16: What type of accommodation is available in MP.

Ans: Madhya Pradesh offers a range of accommodation from Homestays, backpacker’s hotels for Solo travellers, eco lodges for luxury travellers and family, budgeted hotels to luxury Hotels. You can choose anyone of them according to your budget. It’s better to do prior booking to avoid high charges.

17: Which are the best Madhya Pradesh travel tips for first timers visiting the state?

Ans:
Respect the local Culture
Avoid short dresses while visiting Sanchi and Ujjain
Carry Sufficient cash because most places don’t accept card payment
Stay Hydrated to avoid humidity during the trip
Carry your water bottle
Advanced bookings for Accommodation, transportations and Safaris.
Do not take pictures of locals without their permission.

18. Which are popular religious sites of Madhya Pradesh tourism?

Ans: Ujjain: Ujjain is known for the -old Mahakaleshwar Temple, A house of colourful statues of Ganesh, Bade Ganesh and many more..
Amarkantak: A frequent Hindu pilgrimage center. Also known as ‘the king of pilgrimages’- ‘Teerthraj’
Maheshwar: Maheshwar is famous for its treasure trove of beautiful temples.
Omkareshwar : Omkareshwar is the sacred island which is shaped like Om ( the holiest symbol of Hinduism). This is also one of the 12 Jyotirlinga shrines in India.
Sanchi: Sanchi is famous for numerous stupas, temples, monasteries and an Ashokan pillar.

Ans: Madhya Pradesh is located in the middle of India and known as ‘Heart of India’. It comes under the Indian plateau region. Betwa River, Chambal, Indravati, Mahanadi, and Sone River flows through this land. Madhya Pradesh shares boundaries with Rajasthan, Uttar Pradesh, Maharashtra, Gujarat and Chhattisgarh.

23. What is Madhya Pradesh famous for?

24. What are the Dos and Don’ts while visiting Madhya Pradesh?

Do’s
Use filtered drinking Water
Try street food (Chatori Gali) and local cuisine of Madhya Pradesh
Choose backpack over other bags/trolley Bags
Always carry a photocopy of your important documents
Cover your head when you are in a religious place
Don’t
Do not stroll in the night especially when you are alone.
Do not use plastic bags
Do not argue with locals
Do not take pictures of locals without their permission
Do not carry heavy luggage
Do not wear black clothes while visiting Jain temples

25. What are the important points to remember while travelling in Madhya Pradesh?

In the case of a woman solo traveller be careful while choosing your outfit.
Do the research on local culture and best possible areas before starting your trip
Avoid going alone on late night
Don’t get too personal with people like taxi drivers, tourist guides, auto driver and so on
Do not drink the local water. Instead, carry bottled drinking water
Stay hydrated throughout the journey to avoid humidity
You are not allowed to purchase a drink if you are younger than 18 years.
Always consume alcohol on personal premises.
Do not drink and disturb other people.

26: Things to do in Madhya Pradesh?

Ans: Experience beautiful National Parks
Try Adventure with flying fox if you are in Kerwa Dam
Enjoy cable car ride in Bhedaghat
Do not forget to try river rafting in Orchha
Witness the pathway of the Amarkantak region
Jungle camp at Delawadi
Do rock climbing in Pachmarhi
Explore Bargi Dam
Enjoy wildlife safari at the Kanha National Park
Do boating in Bhedaghat and Upper Lake.

27. What are the famous honeymoon destinations in Madhya Pradesh?

Madhya Pradesh is less crowded as compared to other tourist destinations like Himachal, Uttarakhand, Kerala and Goa.
Madhya Pradesh offers the ultimate romantic experience with stunning views and breathtaking tourist attractions. Pachmarhi is one of the most beautiful hill stations of Madhya Pradesh with honeymoon delight. Here is a list of the top honeymoon destinations of Madhya Pradesh.
Pachmarhi – it is a Little Cozy Retreat
Amarkantak – Offers Visual Delight to tourist
Rewa: A unique and offbeat honeymoon place
Jabalpur: Famous for Sparking beauty of Marble rocks
Bandhavgarh National Park: Famous for thrilling honeymoon

28: Which is the most beautiful place in Madhya Pradesh?

Ans: Pachmarhi is one of the most beautiful and famous destinations of India. It is famous for its ancient heritage sites, rich history and dense forest. The best time to visit Pachmarhi is in monsoon and summer season. It is also recognized as a UNESCO Biosphere Reserve. It houses one of the tallest waterfalls of India, Caves and Satpura Ranges.

29: How safe is drinking water in Madhya Pradesh?

And: Do not drink groundwater of Madhya Pradesh because it’s Hard water which causes severe health problems as well as it’s not good in taste. Do not consume lake water and Dams one which is another source of drinking water in Madhya Pradesh. It’s better to go for filtered water and boiled water which will keep you safe throughout the journey.

30: What are the offbeat places in Madhya Pradesh?

Bateshwar: Bateshwar temples are 200 to 300 years old which is older than Khajuraho Temples.
Mandu: Mandu is famous for its architectural brilliance
Bhind: Bhind is home to the number of beautiful temples.
Satpuras: It is one the most beautiful offbeat destinations of Madhya Pradesh. Which offers fresh clean air, Lush greenery and the coffee plantations.

31. How is the weather condition in Madhya Pradesh throughout the year?

And: Madhya Pradesh climate is highly variable. You will experience extreme hot in summers, extreme cold in winters and extreme rainfall.

32: Availability of ATM in Madhya Pradesh?

Ans: ATMs are easily available in cities of Madhya Pradesh but it is advisable to carry cash when you are going to offbeat destinations.

33: Do I need a visa to visit Madhya Pradesh?

Yes, Visa is must unless you are a national of neighbouring countries like Nepal, Bhutan and Maldives. Always carry your valid passport and visa before travelling to Madhya Pradesh.

34: Is there any Hill station in Madhya Pradesh?

35: How are the roads in Madhya Pradesh?