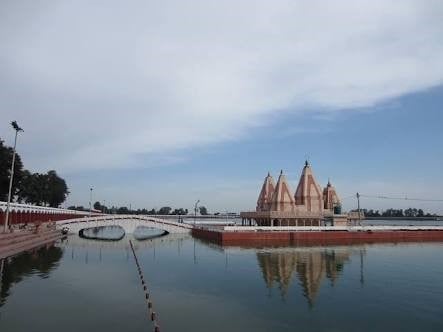 Kurukshetra is one of the holy place in India. It was here that the great war of Mahabharata took place.  My friends had listened a lot about Mahabharata and wanted to see Kurukshetra, so on one of the weekends, we decided to a short trip.

We started at around 9:00 am from Greater Noida in a taxi. It was April but luckily the weather that day was pleasant, windy and cloudy. After around an hour and half, we finally crossed New Delhi and were on our way to Kurukshetra. There were a lot of dhabas in Murthal, which are quite famous. Most of the people going to airport stop there only for food. Even we were famished, so we stopped and ate. The best road trip is when you have your friends with you, the weather is superb, the music and fun with friends. Road trip was an amazing fun and it took us almost 4 hours to reach. Temple is one of the 52 Shakti Peethas. You must have heard story of Lord Shiva and Sati. This temple is believed to have her ankle.

It is said that all your wishes come true here. It was Saturday when we went there and it was very crowded. On Saturday, people whose wishes are answered, they come there and gift a horse. It can be of sand, silver, gold, anything depending upon person. This ritual was started when Lord Krishna once gave his horse here. There was long queue of people, we somehow got to enter it and it was very beautiful. We really loved the whole experience and learning about the existence of this temple. This is a temple dedicated to Lord Shiva,i t belongs to ancient period. It was here that Pandavas along with Lord Krishna prayed to Lord Shiva and received his blessings for Mahabharata.

It is said that water of the tanks adjoining the temple are holy and can even cure King Ban of leprosy in few drops. It was very peaceful when we reached there. We prayed to Lord Shiva and also saw bats in a nearby tree. It is supposed to be largest man-made pond. On the day of solar eclipse and Amavasya, lakhs of people come here to take bath in holy sarovar which according to them frees them from all the sins and cycles of birth-death.

On the occasion of Geeta Jayanti, a very big craft fair takes place which is in December and gathering itself makes it a memorable experience.There is a chariot in Purushotam Bagh of Brahma Sarovar which is the world’s largest bronze chariot. There, we went to see the famous tree under which Bhagavad Gita is supposed to be delivered to Arjuna. It is a banyan tree.

An old Shiva Temple is also there. A marble chariot is there indicating Lord Krishna giving sermon of Bhagavad Gita. This tomb belongs to Sufi Abd-ur-Rahim Abdul-Karim Abd-ur-Razak, popularly known by the name of Sheikh Chilli. He is believed to be master of Mughal Prince Dara Shikoh. The architectural plan of the tomb is very beautiful and is on second number in North India, first being Taj Mahal. The gardens in the Maqbara are alluring. The carvings all over the walls and ceiling were truly amazing. There was archaeological museum also which is run by archaeological survey of India. This monument was declared and protected as of National importance.