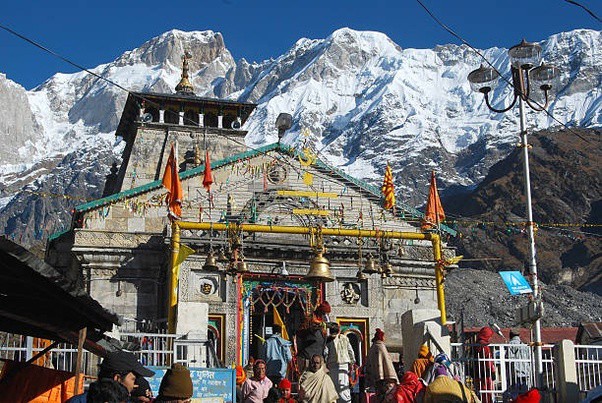 According to an order passed by the Chief Minister of Uttarakhand, the Kedarnath temple has been opened for local pilgrims. The famous temple opened its doors on May 4.

Additionally, Himalayan temples in the state can be visited by pilgrims from Uttarakhand.

These three districts in the Garwhal Himalayas fall in the green zone.

This means that there have been no reports of COVID-19 cases in those districts as of yet.

In the absence of pilgrims, Kedarnath was opened on April 29th due to the extension of the lockdown.

On the occasion of Akshay Tritiya, the Gangotri and Yamunotri temples were opened on April 26.

All the four temples have been opened except for the Badrinath temple. This temple will reopen on May 15.

CM Trivendra Singh Rawat said that from May 4, inter-district travel will be permitted in the state with certain rules. This will be more prevalent in districts that are under the green zone.

However, despite these restrictions being lifted, people have been urged to still observe social distancing while they go to visit the temple and pray.

This is of utmost importance, according to the CM.

But what about devotees from other parts of the country? Will they be able to visit the temples as well?

In response to these questions, the CM said that the state government is waiting for the COVID-19 crisis to cool down as it is a major hurdle.

A ruler in the Satya Yuga, the templed is believed to be named after King Kedar.

Kedarnath is usually flocked with tourists as it is a revered pilgrimage site. There is a peak during the Yatra season. It lies in the middle of the majestic Garwhal Himalayas that are snow-capped.

Due to harsh weather, the temple is open between April and November for tourists.

During the 2013 flash floods in North India, Kedarnath was one of the worst areas to be hit. Extensive damage had been inflicted on the town, surrounding areas, and the temple complex.

However, the structure itself did not sustain extreme or major damage. It was protected by a huge rock from the debris, leading to only a few cracks in one of the walls.

After the flood disaster, the highest number of pilgrims that visited the temple was around 7 lakhs. This record took place in 2019.

PM Narendra Modi had also visited the shrine in May 2019. His meditation at the cave increased the demand among pilgrims for the cave.

In fact, it seems that Narendra Modi considers Kedarnath as a place close to his heart. According to a high official associated with the shrine, the PM is concerned with all developments surrounding Kedarnath.