Home » Uncategorized » Himachal, Uttarakhand, and Goa Are Ready To Welcome You Again 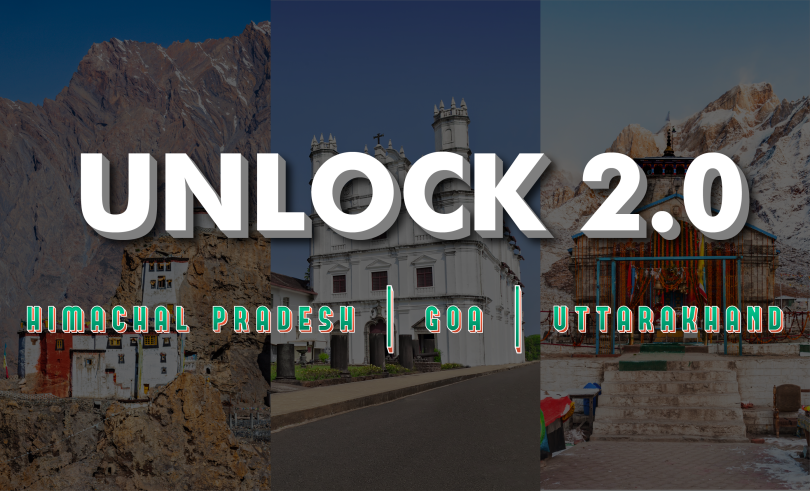 Unlock 2.0 has been instated throughout the country and as the name suggests, the country is opening up once again. In the same context, Himachal, Uttrakhand, and Goa have announced that their borders are now open for tourists from across the country.

Stop! before you jump from your seat and about to hit the tab to the list of our upcoming trips to search for a package to your choosing, there are some things you should know about.

While travel is seemingly looking like a possibility for someone like you, who has been sitting on their plans for 3 and a half months already but there might still be some complications.

The states however have launched a guideline for travelers which they need to follow in order to cross the state border. The set of guidelines are as follows:

2. Prior hotel booking of at least five days.

3. Will have to stay for at least five days and more.

4. The COVID-19 test has to be done by an ICMR-accredited laboratory not earlier than 72 hours.

5. If the conditions are fulfilled, then there will be exemptions from the quarantine requirement.

This is an official requirement from a traveler that has been provided by the Himachal Tourism Board. But almost similar rules would be instated for travelers in other states as well probably.

Moreover, One has to register themselves and get an e-ticket from the COVID-19  e-pass website. Which is how the government is planning on keeping the traveling data of individuals across the country.

Now, the traveler in you must be jumping at the slightest possibility of travel, right?

But wait, we have more news for you, which might put you off possibly. The inter-state tourism is allowed unlock 2.0 and states are opening up but inter-state buses are still not operable. This is why if you don’t own a viable vehicle, you won’t be able to go ringing in these states.

Also, the devotees across the country are ready to head out to Uttrakhand but the entry inside the temples is abolished for now. The reason being that we all know how much of the public can show up in situations of religious gatherings like the Tablighi Jamaat, which caused an outbreak in Delhi and surrounding areas.

Now, coming onto the third state in the list which is Goa, they have been getting impatient to open up as well. For Goa is one of the places in the country which generates quite a lot from tourist activities.

They have planned to open up 250 hotels that pass their checklist of things which makes them safe in the current situation.

The tourist sector has been hit quite hard from the pandemic and from industries such as aviation to even local guides, everyone has been worried about their future. In a situation such like this one, having news like this is a sign of big relied upon them.

But, as a tourist, you would have to decide that if you’re willing to travel in the current situation or not? For this time it’s just not about your health, but it’s about other people coming in contact with you as well.

Among all this, one of the most prominent hopes of light for the country and the travel industry is the promises of manufacturing of Covid-19 by the 15th of August 2020.

If the promise made by ICMR does hold up then things would move on much quicker and not only travel but many possibilities would open up.

So, what do you think should be a probable step for the traveler who has been putting their travel goals aside for so long? Tell us in comments, we would want to know.