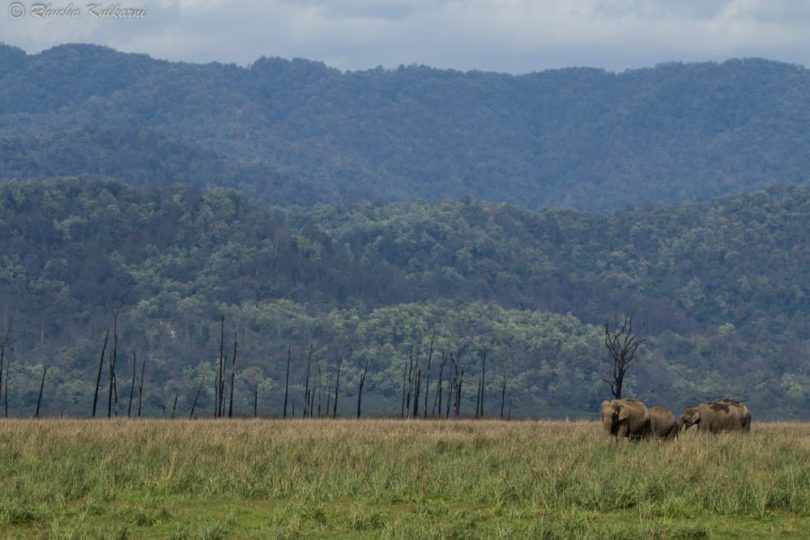 A single “caoo” penetrated the morning mists, announcing the arrival of a new dawn. A new dawn it was, for new life stirred with every sound, indeed it was a new hope for the numerous denizens that called these pristine forests their home. The ground trembled with a distinct rhythm as the gentle giants reclaimed their dominance in these rolling lands. And yet, every living being played a game of dominance of its own kind.  The big cat seemed to resent this display of brawn and brains, and let out a single “auuu”. It was a sound that reverberated right from the undergrowth to the tree tops and through all realms in between. And then all was still. It was this medley of sound and stillness, set into an unpredictable and musical rhythm, which beckoned me again and again to these wonderlands. This was the land of Song, Trumpet and Roar. 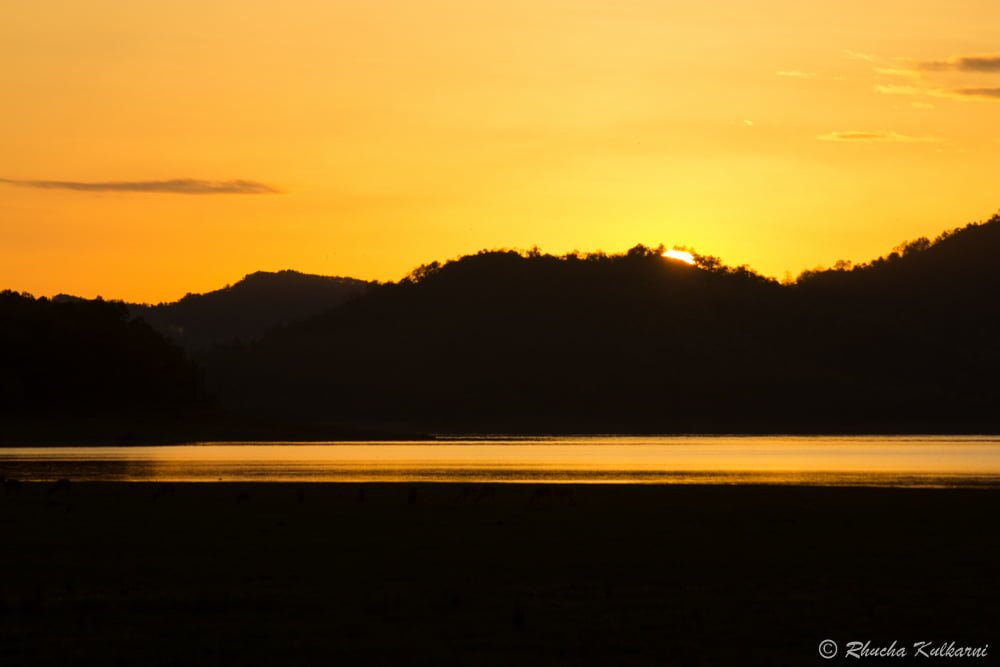 The lovely glade of Sal forests welcomed me, extending their pretty green arms into a warm embrace. Their green fluttering leaves waved at me with a jolly stance, as if to introduce me to their unique way of life. Theirs’s was a life of giving, producing food for the humongous wealth that the trees made. I readily accepted this warm welcome and made my way through the winding trails seated in the gypsy, eager to know what lay ahead on this wilderness excursion. The cool wind whistled through my hair, seemingly disclosing to me the secrets of the jungle. These gusts had travelled from far across, from the majestic mounts of the Kumaon ranges. Whether they had accompanied the gurgling waters of the Himalayan Rivers or made this journey alone, one would never know. Here they were, cold and stark, yet caressing me with a surprising warmth. As I rounded the curve, a vast scenery unfolded- the river bed of the ravenous Ramganga spread before me for as far as the eye could see, on the backdrop of the soaring Himalayan ranges and the azure skies.

I had heard of the Terai, the undulating terrain just short of where the Himalayas rise to their tall glory. The unending elephant-tall grasslands interspersed with rich vegetation, seemed a diverse mix in itself. A keenness to explore this unique habitat and it’s even more distinct flora and fauna egged me to plan a trip to Jim Corbett National Park. With the babbling Kosi on one hand and the raging Ramganga snaking through its heart, the reserve forest was one-of-its-kind, I had heard. And rightly so. For this was core tiger land- untouched terrains where the Apex Predator could roam about freely, establishing his reign as the king of the jungle. The tiger of this region was better known as the “Terror of the Terai”, as I had read in innumerable Jim Corbett books. Legend has it that a number of the tigers have traditionally been man-killers or man-eaters, especially in the early 1900s. Fascinating stories from the folklore of yesteryears have always captured my interest, and I wished to see for myself, if I could get a glimpse of this elusive and much feared animal in its own home. And so the “trance of the Terai” had gripped my mind, body and soul, and I embarked on this ambitious quest to track the tiger in the foothills of Kumaon. 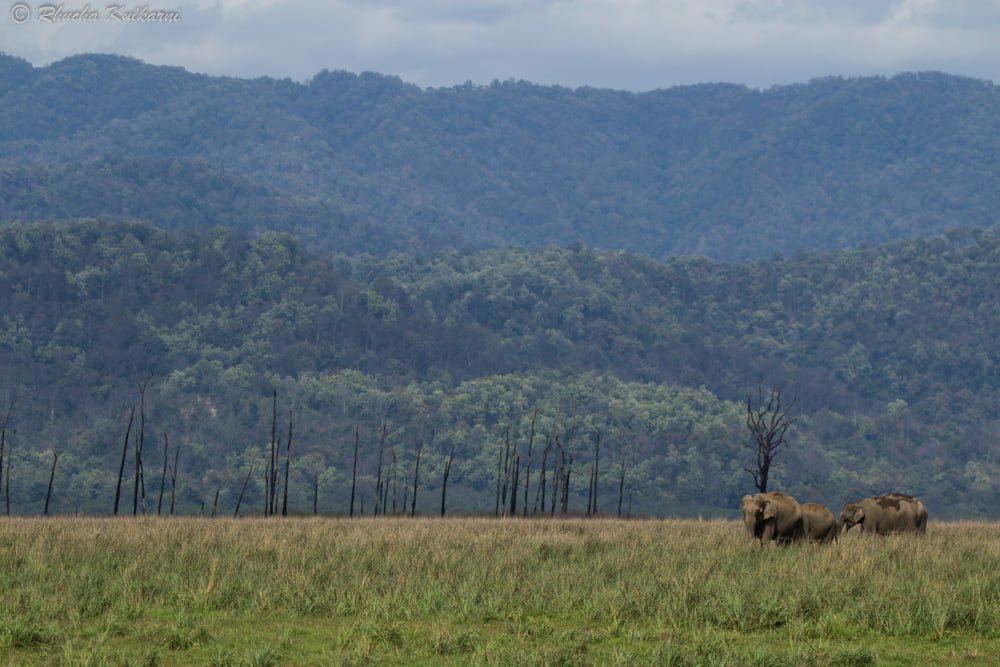 I had an agenda in mind- tracking the elusive big cat. All about tracking the “forest signs” coupled with the “forest intelligence” of the drivers and guides, should have you in good stead in terms of tiger-tracking capabilities! Our sensory surveillance mode turned to a full high, we explored. A herd of elephants was enjoying some family time near the lake, trumpeting with joy. A frolicking calf happened to stumble over a rock, and his frantic mother came to the rescue, trumpeting the alarm call! Dainty does took a wary look at us, and leapt across the wide road right in front of our gypsy. The air seemed to sing a chorus, contributed by the multiple birds that called it their homes. I was jolted back to reality by a chorus of trumpeting from the adjacent bushes. What followed was a display of sheer strength and will, of our trunked friends – the elephants. The very next moment a raging roar reverberated through the air. My heart did a flip, as I realised the roar had emanated from the very bushes that the elephants had occupied. Then emerged the most magnificent herd of elephants- matriarch and matrons, babies and old ladies, spilling onto the road, one after another. Maybe the tiger was expressing his displeasure at not being able to get to the elephant calf through the protective herd? The matriarch began to lead from the front, making way for the herd to disembark on the banks, to a safe haven. Little did she know she was in for a double whammy? For right on the banks lay another Striped Princess. A roar of displeasure, made the elephants double over, in a state of panic and confusion.

Thus, in the mystic realms of Corbett, I faced the Face-Off of the Mighty- A War of Dominance and a thrilling beyond belief!

HOW TO REACH:   The park is located near the town of Ramnagar, some 250 kilometres from New Delhi. Book an overnight train journey on the Ranikhet Express from Delhi to reach Ramnagar. Alternatively, you can drive down through the meandering Kumaon hills in a taxi/car for the road journey (6-7 hrs).

SAFARI BOOKINGS    Gypsy (jeep) safaris need to be booked online or through an agent. Make sure to book at least 2 months in advance, bookings fill up fast. You may contact us for bookings.
Fees: One gypsy safari costs approximately INR 4500–6500 (Foreign Nationals), depending on whether you opt for accommodation at the Forest Rest House or not. Two-hour elephant safaris can be booked on the spot or online for around INR 500 per person, seating four people at a time. These rates may vary as per Forest Department rules.
Timings: Morning safaris start around 6:00 am and last till about 10 a.m. Evening safaris start at around 2:00 p.m. and go on till about 6:00 p.m. The timings may slightly vary depending on season.

WHERE TO STAY The Forest Department runs forest rest houses inside the forest (recommended locations: Dhikala zone and Bijrani zone). Basic, clean accommodation and food is available. You can also opt for comfortable resorts outside the entry gates. Camp River Wild is a good facility with log hutments and delicious food.