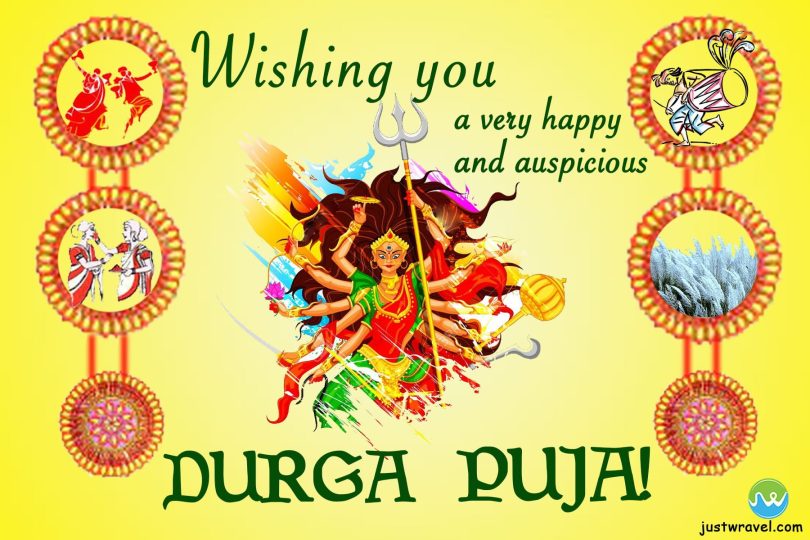 Durga Puja, also known as Durgotsava or Sharadotsav is a Hindu Festival in South Asia that celebrated the Worship of Hindu Goddess Durga. It includes 6 days of celebration; Mahalaya, Shasthi, Saptami, Mahaa-Ashtami, Mahaa-nabami, and Dashmi (Vijayadashmi). This festival marks the great victory of Goddess Durga over the Buffalo demon named Mahishasura. Thus, it epitomes the victory of Good over Evil. It is celebrated in Indian states of West Bengal, Meghalaya, Tripura, Odhisa, Manipur, Jharkhand, Bihar, Nepal, Mithila, and Assam.

In Tripura and West Bengal because of presence of majority of Bengali Hindus, it is the biggest Festival of the Year, also in Assam. Apart from being a religious festival, it is also an occasion for reunion and rejuvenation, and a celebration of traditional culture and customs. During Durga Puja, God in the form of Divine Mother is worshipped through nine types of plant known as Kala Bou, including a plantain tree, which represent nine divine forms of Goddess Durga. On the first three nights of the festival, Durga is worshipped, followed by Lakshmi for the next three nights, and lastly Saraswati Devi on the last three nights. Then the last day, tenth day, is called Vijayadasami. Vijay means victory, and victory over one own’s mind can only come when these three goddesses, Durga, Lakshmi, Saraswati are worshipped. Durga Puja starts with Mahalaya, the first phase of the waxing moon in Aswin. On this day, thousands of people offer prayers to their ancestors at the city’s river banks, and this ritual is known as Tarpan. On the Mahashasthi, the inauguration of the Goddess idol starts. The next three days are the main days for Puja. Puja Rituals are very long, detailed and complicated. An expert priest is needed for all the mantras, shlokas, aarti and offerings, because of which it has mostly emerged as a community festival. On the last day, a tearful farewell is offered to Goddess. The images are carried in processions around locality and finally is immersed in a nearby river or lake.

Earlier, it was considered to be the most expensive festival and only the rich and powerful like feudal lords, rajas and big businessmen were said to perform the Puja, but now it is not like that as everyone performs it. Earlier, age-old conch shells and drums were used whereas now films songs are used, even sometimes the goddess id modelled in a popular film actress. Animal sacrifices were considered a must earlier, but now it has been dispensed with at many places and shrines. Now, Durga is not worshipped alone but with family constituting Ganesha, Kartikeya, Saraswati, and Lakshmi who are considered to be children of Goddess. The most authentic form of Durga is that of a ten handed goddess modelled out of clay astride a lion. Each of those hands carry a separate weapon in them except the two, which holds the spear which has been struck into the chest of the demon. Modern traditions associated with the festival includes display of decorated pandals, artistically depicted sculptures (murti) of Durga, exchange of Vijaya greetings, and publication of Puja Annuals. People dancing on the beats if drum, and evening surrounded by divine tunes of aarti of Goddess Durga are some of the unforgettable features of Durga Puja celebration. Moreover, having a portion of delicious bhog, artistic view of pandals, colourful fireworks, and mouth-watering food delights at various food corners held at every nook and corner marks the celebrations. Singing, dancing, sweets and gaiety are an integral part of the Durga Puja Festival. People also send Durga Puja Gifts to dear ones and express their good wishes.