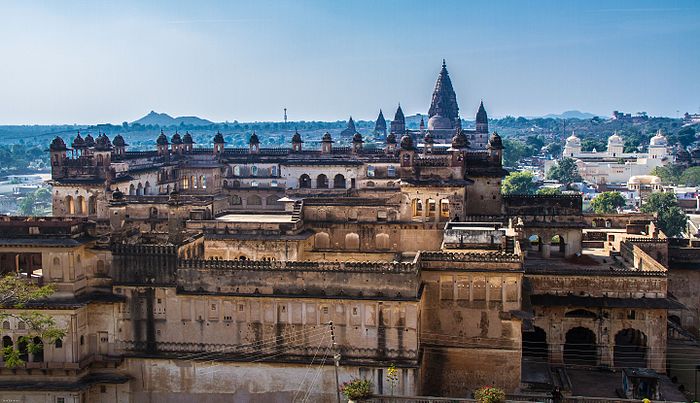 Madhya Pradesh is truly the Heart of Incredible India. It has so many awesome places to explore that you just cannot get enough of it. Two such places are Orchha and Jhansi. With historical heritage abound, they make for a wonderful short trip.

Let’s take you on a joyful drive to these “grand” destinations.

Orchha, situated on the banks of Betwa river is an interesting town, renowned for the medieval temples and royal architecture. Rudra Pratap Singh established it somewhere around the 16th century. It was the capital of Bundela Rajput kings and the monuments here ooze of history and the royal bygone era.

With hills and verdant surroundings, Orchha becomes all the more coveted for tourists. It is truly a paradise for nature and history lovers. Listing below all the places which you can see to discover Orchha and Jhansi.

Places to Visit in and Around Orchha

The splendid location of the island on Betwa River houses this fort. Jahangir Mahal, Raj Mahal and Rai Parveen Mahal are the prominent palaces over here.

Jahangir Mahal is an epitome of the magnificent architecture that existed in the erstwhile era.

Raj Mahal is the oldest historical monument in the fort. Rai Parveen Mahal is now in ruins but it used to be a magnificent palace surrounded by lush green gardens. It has an interesting history behind it. Rai Parveen’s charm as a poetess and dancer lured King Indramani so much that he built the palace for her.

Bundela Rajput kings built the Chaturbhuj temple before around 400 years ago. Historians believe that the king decided a particular site of this temple from where he could catch a glimpse of Lord Krishna from the balcony of the palace. The top floor of the temple presents incredible views of the world below.

Raja Bir Singh Ju Deo built Jhansi Fort on Bangra, a rocky hill situated at the center of Orchha. Sprawling over 49 acres, it has a museum that gives a clear insight into the rich history of Bundelkhand. It is one of the best-fortified structures in India and helps you discover Orchha and Jhansi.

Dinman Hardaul’s Palace was built in the 17th century as a tribute to Prince Hardaul’s sacrifice. He gave away his life for the sake of the values he held close to Jhujhar who was his elder brother when he was accused of being romantically attached to his brother’s companion. It is like an ode to human values as well as architectural talent that existed in the past.

Do not miss out on visiting 14 Chhatris beside River Betwa that beautifully symbolize the grand past of the Bundelkhand dynasty.

Constructed in 1662, Laxminarayan Temple has some awesome paintings on its walls and ceilings along with Goddess Laxmi as the main deity. It is a perfect amalgamation of temple and fort architecture. It was renovated by Prithvi Singh in 1793.

If you are a wildlife lover, Madhya Pradesh has quite a few sanctuaries and national parks. One such wildlife sanctuary is at Orchha too. It is spread over 46 square kilometers with River Betwa flowing through it. You can spot tigers, leopards, langur, jackal, sloth bear, blue bull, monkeys and peacocks besides 200 bird species.

Jhansi, in Uttar Pradesh, is around 13 kilometers from Orchha. Located along the banks of Pahuj River, it is a historic city that reflects the royal past of Bundelkhand and is famous in history coz of Rani Laxmibai of Jhansi.

Here are the top places to visit while in Jhansi.

Spreading over 15 acres, Jhansi Fort is an epitome of North Indian architecture built on a hilltop known as Bangira. Jhansi Mahotsav is a festival that takes place here every year in the month of January-February.

All the memories of the Great Rani Laxmi Bai and her valor are preserved in this palace turned museum. Apart from the treasures of her braver tales, you can also get a glimpse of archaeological remains of 9th to 12th centuries.

If you wish to have a peek into the wonderful Indian heritage and rich history that India possesses, Orchha and Jhansi take you to the perfect sojourn.

Plan your trip to Madhya Pradesh right away, discover Orchha and Jhansi by covering all the places mentioned and make sure you don’t forget your HD camera!

Dr. Disha Bhatt is an ardent traveler & loves to explore new places.She believes that every place has something awesome to offer & no place is "good" or "bad" to travel.