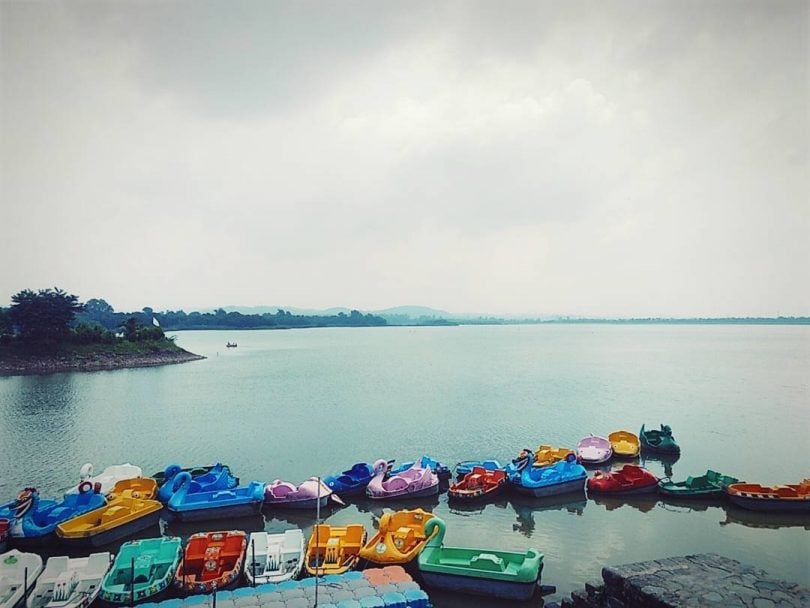 Nestled in the picturesque location and clean surroundings, Chandigarh is truly ‘The City Beautiful’. Unlike other chaotic Indian cities, this combined capital of Haryana & Punjab is highly revered for its distinctive urban planning. Situated at the foothills of Shivaliks, the city acts as a great getaway to the serene hills of Himachal, Uttarakhand, and further north. Having a plethora of places to visit near Chandigarh makes it easy to plan escapes under a budget of 5000 Rupees.

So here are 10 pocket-friendly weekend road trips from Chandigarh which can be easily planned out.

Formerly known as Ropar or Rupar, this was one of the bigger sites belonging to the Indus Valley Civilization. Rupnagar is said to have been named by a king called Rokeshar after his son Rup The popular Hindu pilgrimage of Naina Devi is located on a hilltop at about 60 km North of Ropar overlooking the Gobind Sagar lake.

Anandpur Sahib is another sacred place to pay homage. Take a short trip to this nearby place from Chandigarh and feel the divinity all around.

Situated at 227 km from Chandigarh, this popular city of Punjab is more than just Sri Harmandir Sahib (commonly known as The Golden Temple). Plan a pocket-friendly getaway to Amritsar and enjoy the famous beating retreat ceremony at Wagah Border that is held every day before sunset.

Nestled in the serene hills, Chail is a small town in the Shimla district. Situated at only 113 km from Chandigarh, this quint hill station is a perfect getaway and easy on your pocket.

Merely 2 hours drive away from the Shimla, Chail is a haven for those wanting to escape mind-numbing restlessness of city life. Looking for some adventure? Then try out Hiking, fishing, and horse riding in this quiet hill-station of Himachal Pradesh.

Located at a distance of 107 km from Chandigarh, Shoghi is a pleasant and appealing destination for a budgeted road trip. Mesmerizing oak & pine forests, and tranquil surroundings have made this Himalayan retreat an ideal choice to take a break from mundane lifestyle.

Shoghi is also famous for various fruit products such as pickles, juices, syrups, and jellies.

Nahan is an ideal holiday getaway, away from the buzzing crowd of the city. This picturesque hill station is truly blessed by nature. Apart from beautiful surroundings, the destination is praised for trekking, fishing, forts, and wildlife.

Situated at just 85 km from Chandigarh, Nahan is a perfect romantic weekend getaway with someone special.

One of the most popular destinations of Jammu & Kashmir, Patnitop is a beautiful hill station is situated on a flat top in the Shivalik This hill retreat is located at 409 km from Chandigarh amidst surreal environment.

From the hilltop, one can see the breathtaking views of the Chenab basin and the Pir Panjal ranges beyond. If you want to seek tranquility under budget, then take a leisure trip to Patnitop.

Sanasar is one of the remotest areas of Jammu and Kashmir State. Situated at an altitude of 2050 meters, this hill station is a haven for adventure enthusiasts. One can enjoy various activities such as paragliding, rock climbing, abseiling, and trekking.

Sanasar is the aero-adventure-sports capital of Jammu. The lush green alpine meadows and lofty peaks make this hill retreat an ideal getaway from Chandigarh.

Located at a distance of 494 km from Chandigarh, Sattal is a calm and heavenly beautiful destination in Uttarakhand. Surrounded by dense oak & pine forest, this hill retreat is a cluster of pristine lakes which makes it a perfect place to rejuvenate with your closed ones.

Plan a pocket-friendly trip to Sattal situated in the outskirts of Nainital and feel the charm of natural flora and fauna.

Founded and named after then Viceroy of India, Lansdowne is one of the quietest Himalayan retreat located in the Indian state of Uttarakhand. The hill station is home to some of the most mystical and breathtaking views.

This offbeat destination in Uttarakhand is situated at a distance of 309 km from Chandigarh. So plan a peaceful vacation to Lansdowne with your family or friends and relive the colonial era amidst serene hills.

Situated on the Chamba-Mussoorie highway, Kanatal is an offbeat destination which offers peace and solitude. A small holiday to this Himalayan retreat can be planned under a minimal budget.

The lush green surroundings and pleasant weather make Kanatal a great option for camping enthusiasts. One can rejuvenate in the serene environment of Kaudia forest or get mesmerized by the panoramic views of the mighty Himalayas from Surkanda Devi temple.

Looking for some more destinations near Chandigarh? Check out the weekend road trips you can plan under Rs.5000 from Chandigarh.