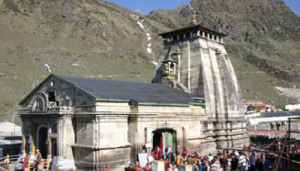 Gallery
Home explore from - to - Kedarnath

Foggy throughout the day.

Kedarnath is a pilgrimage centre located in Uttarakhand, India. It lies at a height of 3584 m above sea level and is one of the ‘char dhams’ identified by Hinduism as the most religious places. It is also the remotest and the hardest to reach dham of all the four places.

Kedarnath is named after King Kedar, who occupies a place in mythology. According to a mythological account, King Kedar ruled the present day Kedarnath during the Satyuga period. He had a daughter named Vrinda, who was Goddess Lakshmi’s human incarnation. Vrinda is supposed to have lived an ascetic life for 60000 years, praying to the Lord all the while. Vrindavan is named in honour of her.

The temple opens on Akshaya Tritiya (April end or first week of May) and closes on Bhai Duj (October end or 1st week of November) due to heavy snowfall and extreme cold weather during winter.