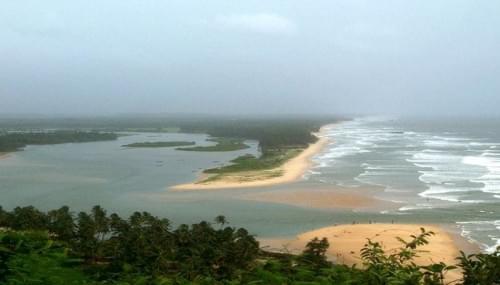 Gallery
Home explore from - to - Udupi

Possible light rain overnight and in the morning.

Udupi (alternatively spelled as Udipi  and also known as Odipu  in  Tulu, is a city in the Indian state of Karnataka. It is the administrative headquarters of Udupi District.

Udupi is notable for the Krishna Temple and lends its name to the popular Udupi cuisine. It is also known as Lord Parasurama Kshetra, and is famous for Kanakana Kindi.

A centre of pilgrimage, Udupi is also known as Rajata Peetha and Shivalli (Shivabelle). Manipal is a locality within Udupi city. Udupi is situated about 60 km north of the industrial hub Mangalore and about 422 km northwest of state capital Bangalore by road.

Udupi is known for the Krishna Mutt (Temple of Lord Krishna) and as the native place of the Vaishnava saint  Shri Madhvacharya, who founded the (dvaita) sect of Vaishnava Hinduism and the Udupi Krishna Mutt (in the 13th century). He is known as the third form of Mukhya praana (literally meaning 'primary life source'), after Hanuman and Bheema.

Udupi is the birthplace of the Syndicate Bank,  Corporation Bank and Harsha Retail, the leading retailer of coastal Karnataka.