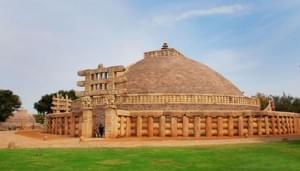 Gallery
Home explore from - to - Sanchi

Sanchi is a small village in Raisen District of Madhya Pradesh. It is the location of several Buddhist monuments dating from the 3rd century BCE to the 12th century CE and is one of the important places of Buddhist pilgrimage. Toranas surround the Stupa and they each represent love, peace, trust, and courage.

The 'Great Stupa' at Sanchi is the oldest stone structure in India and was originally commissioned by the emperor Ashoka the Great in the 3rd century BCE. Its nucleus was a simple hemispherical brick structure built over the relics of the Buddha. It was crowned by the chatra, a parasol-like structure symbolizing high rank, which was intended to honor and shelter the relics. It has four profusely carved ornamental gateways and a balustrade encircling the whole structure. The festival of Chethiyagiri Vihara is celebrated in the month of November at Sanchi. Two relics of Gautam Buddha's early disciples are displayed as a part of the rituals of the festival.

Carved with stories of the Buddha's past and present lives and with incidents from the subsequent history of Buddhism, the gateways of Sanchi Stupa are the finest specimens of early classical art, which formed the seedbed for the entire vocabulary of later Indian art.  Two of the moving stories told on these portals are those of Prince Vessantara, who gave away his wealth, his wife and children out of charity and compassion, and of Buddha who, as the monkey king, sacrificed his life to save his companions.