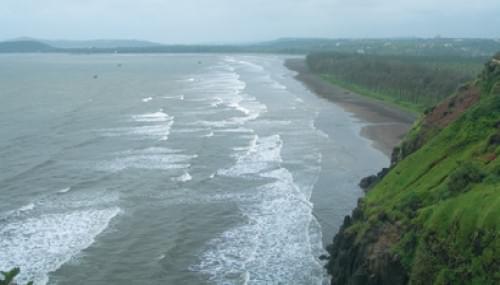 Gallery
Home explore from - to - Ratnagiri

Ratnagiri is a port town in Maharashtra. The name Ratnagiri means “gem in the hills’ (Ratna – gem, Giri – hill) in Marathi language.

The town was the administrative capital of the Bijapur Sultan. In 1731 the kingdom of Satara took control of this place. Later in 1818, the Britishers took over. It is also the birthplace of Lokmanya Bal Gangadhar Tilak.

In 1886, the king of Thibaw was imprisoned here by the Britishers along with his family. Ratnagiri is in the southwest of Maharashtra at the mouth of Kajali river. It is bordered by the Arabian Sea in the west and the Sahyadris in the east.

The town is well connected by roadways to the major cities like Mumbai (350 km), Pune (308 km) and Satara (196 km). The changing landscape of the hills and forest through the ghats, makes the road journey to Ratnagiri a memorable one.

The major crops that are cultivated here are Rice, Cashew, Coconut, Spices, and Mangoes. The Alphonso mango of Ratnagiri has got a GI tag and is in huge demand outside the country.

Other economic activities include fishing and mining (iron and bauxite). The Marine Biological research station of the state government is also established in Ratnagiri. The summers are very humid and the winters are mild. There is heavy rainfall in monsoon.

The best time to visit Ratnagiri is from October to February.

The people of Ratnagiri are very warm and tourist-friendly. Many traditionally built houses can be still seen in Ratnagiri. The people here speak “Konkani” language, another form of Marathi.

The cuisine of Ratnagiri will completely satisfy the taste buds of a fish lover. The style of cooking fish here is very unique and authentic. The major ingredient used in most of the dishes is coconut.

Ratnagiri offers a serene landscape of the western ghats, beaches, temples, forts, hot water springs, and waterfalls on the way, coconut and mango farms making it a popular tourist place in Maharashtra.

The must-do activity in Ratnagiri is to see the conservation, hatching and migration of the Olive Ridley turtles during the “Velas turtle festival”. This festival is gaining popularity in the eco-tourism sector both nationally and internationally.