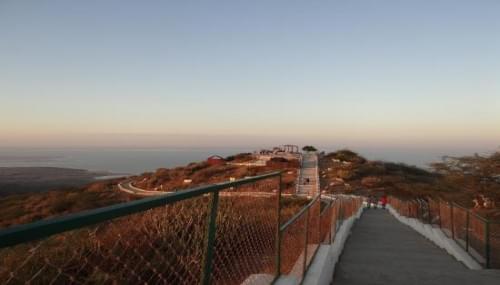 Gallery
Home explore from - to - Bhuj

Bhuj is a city and a Municipality  in  Kutch District in the state of Gujarat,  India.

According to legend, Kutch was ruled by the N ?ga chieftains in past. Sagai, a queen of Sheshapattana, allied with Bheria Kumar and rose up against Bhujanga, the last chieftain of Naga. After the battle, Bheria was defeated and Sagai committed sati. The hill where he lived later came to be known as Bhujia Hill and the town at the foothill as Bhuj. Bhujang was later worshiped by the people as snake god, Bhujanga, and a temple was constructed in his reverence

Bhuj formerly sacred to the snake Bhujang, was established by Rao Hamirji in 1510 and was made the capital of Cutch State by Rao Khengarji I in 1549. Its foundation stone as state capital was formally laid on Vikram Samvat 1 04 Maagha  5th (approx. 25 January 1548). After 1590, when Rao was forced to acknowledge Mughal supremacy, Bhuj was known as Suleiman Nagar among Muslims

Bhuj is a famous destination for shopping of handicraft work like bandhni (tie-dye) and leatherwork. Artists of nearby villages bring their artwork for sale in Bhuj haat which is situated near jubilee ground. Bhuj is famous for the jolly nature of its citizens, who usually go to the surroundings of Hamirsar lake to relax.