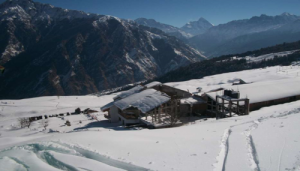 Gallery
Home explore from - to - Auli

RAIN THROUGHOUT THE DAY.

Auli is an important ski destination in the Himalayan mountains of Uttarakhand, India. Auli, also known as Auli Bugyal, in Garhwali, which means meadow, is located at an elevation of 2500 to 3050 meters above sea level. Auli is less known ski destination than Shimla, Gulmarg or Manali.
It was only in the recent time, after the creation of new state Uttarakhand carved out from Uttar Pradesh, Auli was marketed as a tourist destination. The state is called "Devbhumi" which means "Land of the Gods" as there are important pilgrimage destination in this state mainly the 'Char Dham' (Gangotri-Yamunotri-Kedarnath-Badrinath). Auli lies on the way to Badrinath and is surrounded by coniferous and oak forests, with a panoramic view of the lofty peaks of one of the greatest mountain range in the world, the Himalayas. The slopes here provide enough thrill to professional skier and novice as well.

Last week of Jan to first week of March for skiing. Though weather is highly unpredictable.

The Garhwal Mandal Vikas Nigam Limited (GMVNL) a state govt agency which takes care of this resort, and Uttarakhand Tourism Department conduct winter sports competitions at this place to encourage skiing in India, they have imported snow beater to maintain slopes. Auli also boasts the Asia's longest - 4 km - cable car (Gondola). It also has a Chair Lift and a Ski-Lift.

Apart from Skiing there is an interesting trek route as well. A small temple having connection to legendary Hindu epic Ramayana is also present.