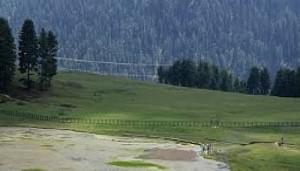 Gallery
Home explore from - to - Sanasar

Situated at an altitude of 2050 metres above sea level, just 17 kms from Patnitop, Sanasar is one of the remotest areas of Jammu and Kashmir State, India. Owing to the awe-inspiring natural environment of forests and meadows, Sanasar is the aero-adventure-sports capital of the Jammu region having to its credit Rock-climbing, Abseiling, Paragliding, Parasailing and Hot-air ballooning. Sanasar is a sports-adventurists’ paradise as one gets an avenue for learning and practicing these rare and skilled sports. Water sports include free-diving, scuba-diving, jet-skiing, snorkeling, and land sports include cliff-climbing, skate-boarding, extreme-skiing, car-racing, whereas air sports include bungee jumping, paragliding, and sky-diving. And Sanasar is home to few such adventure sports.

Also introduced in Sanasar is camping which is promoted by the J&K Tourism Department. Camping Gear is available on rent from J&K TDC.