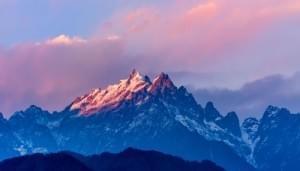 Gallery
Home explore from - to - Pelling

Pelling is a picturesque town located in the district of West Sikkim. The town is at a distance of about 10 km from the district headquarters of Geyzing.

Pelling has had an interesting history. It is said that it was the first capital of Sikkim. It is also believed that the Chogyal dynasty lived and ruled here. It is famous for its view of the snow-capped peaks of the Kanchenjunga. Situated at an altitude of 6,800 ft, it offers a great view of the complete mountain ranges like the Koktang, Kumbhakarna, Dom, Kanchenjunga and others. The great Himalayan ranges and the Kanchenjunga can be sighted at close quarters from Pelling. Pelling also serves as the base camp for treks in West Sikkim

Pelling and its surrounding areas are home to many tribes and communities such as Bhutias, Lepchas, Tamangs, Limboos and Marwaris among others. These people have contributed to the diversity of Pelling; its food and its culture.