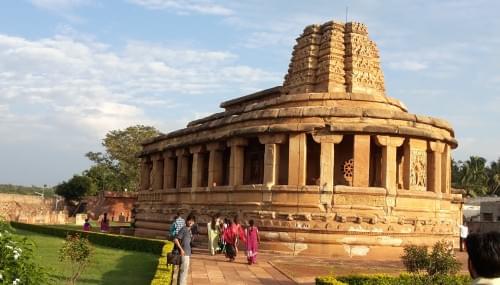 Gallery
Home explore from - to - Pattadakal

Pattadakal, also known as Pattadakalu in Kannada, is a village in the state of Karnataka. This village is situated on the banks of the Malaprabha River in Bagalkot District. It lies 22 km from Badami. The village is well renowned for its range of temples that belong to the group of 8th century monuments.


These temples are popular under the name of ‘Chalukyas’ and form a part of the earliest experiments of the Vesara style of Hindu temple architecture. These temples also made Pattadakal a World Heritage Site in the year 1987. Pattadakal displays both Dravidian and the Nagara styles of temple architecture. Its temples include a Jain Sanctuary accompanied by many small shrines and plinths.

The tradition and culture of Pattadakal village is not only depicted through its temples but can also be seen in its festivals, namely the Banashankari Temple Festival, Virupaksha Temple Car Festival and the Mallikarjuna Temple Festival. Along with these, there is also an annual dance festival held in the village known as the Chalukya Utsava.

These festivals are held in the village between January and April. The activities of these festivals combined with a pleasant weather makes this time of the year, the best time to visit Pattadakal.

The city of Pattadakal also offers many other places to visit apart from its temples in and around the village like Badami Cave Temples, Mahakuta, Aihole, Sudi, Lakkundi, Alampur and many others.