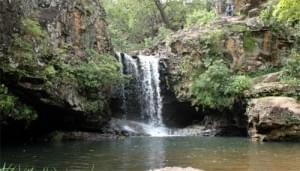 Gallery
Home explore from - to - Pachmarhi

The name Pachmarhi is believed to be derived from the Hindi words Panch ("five") and Marhi ("caves").

According to a legend, these caves were built by five Pandava brothers of Mahabharatha era during their fourteen years of exile. The caves are situated on a hilltop and provide an excellent vantage point.  Pachmarhi region came under the kingdom of the Gond king Bhawut Singh, although it was a populated village or town at that time.

Captain James Forsyth of the British Army along with Subhedar Major Nathoo Ramji Powar who was later made the Kotwal (Incharge of the armoury (Koth)of Pachmarhi, spotted the plateau in the Pachmarhi region in 1857, while leading his troops on the way to Jhansi. It quickly developed into hill station and sanatorium for British troops in the Central Provinces of India.

This beautiful hill station is between October and June.