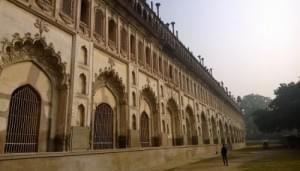 Gallery
Home explore from - to - Lucknow

Lucknow, the capital city of Uttar Pradesh, was once the artistic capital of northern part of India. The city of Lucknow is popular among tourists for its cultural and traditional heritage. Lucknow belongs to Avadh (Oudh) region. It is also the renowned seat of Shi'ism and is referred to as ‘the epitome of Shia culture’ in India.

Lucknow is traversed by River Gomti, dividing the city in to Trans-Gomti and Cis-Gomti, located towards the centre of the great Gangetic plain in the seismic zone III.

The city of Lucknow is of ancient origin as per the inscriptions given in the epic Ramayana.  Lakshmanpur or Lakhanpur was the initial name of Lucknow. This territory was gifted to Lakshmana by Lord Rama, after conquering Sri Lanka and completing the term of life in exile. Later this region came under the rule of Afghans, Mughals and the British. Lucknow also became a major centre for uprisings like the First War of Independence and Indian Independence Movement.