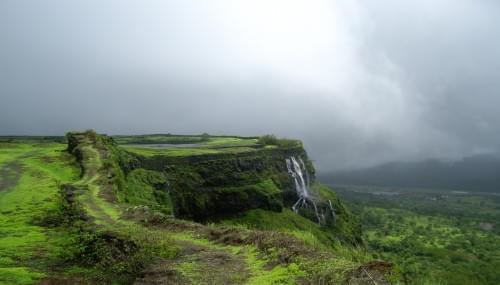 Gallery
Home explore from - to - Lonavla

The name Lonavala is derivated from Prakrit language – Leni (means a resting place carved from stone-caves) and Avali (means series), as this place has a series of caves.

Lonavala is a perfect hill station as an epitome of tranquillity and solace. Lonavala is a very strategic location as it connects the Deccan plateau to the Konkan region.

Lonavala was a part of the Yadava dynasty, the Mughal dynasty, and also the Maratha empire. Their forts in this region are an important part of the history of Marathas and the Peshwas.

In 1871, this place was first discovered by Lord Elphinstone, the then governor of Bombay Presidency. The elevation of this hill station is 622 m above sea level.

Lonavala is a preferred destination for weekend outings, due to easy accessibility and it’s charming nature; especially in monsoons. Housing a number of gardens, breathtaking valley views, cascading waterfalls, beautiful resorts, sturdy forts and ancient monuments, and the royal blanket of lush greenery- makes Lonavala a must-visit place in Maharashtra.

It is very well connected by road and railways. The Mumbai -Pune expressway passes from here connecting to major nearby towns.

Lonavala is 64 kms from Pune and 96 kms from Mumbai. One can travel by local train to Lonavala from Pune. The trains passing from Mumbai to Pune take a halt at Lonavala. This train journey is worth every penny as it will take you through numerous rail tunnels and passes with an ever-changing view of valleys and mountains.

Lonavala is home to INS Shivaji – a premier technical training institute of the Indian Navy established in 1945.

Lonavala is also popularly known for its chikki (hard candy made of jaggery, peanuts and dry fruits). The Golden vada pav and the moong bhaji near the railway station is a local favorite.

Tourism in Lonavala is at a peak during monsoon, but one can visit the place all year round.

The derivation of the word Lonavala is from Leni and Avali that refers to the number of caves in the region – Karla caves, Bhaja caves, and the Bedse caves.

Lonavala also has a number of forts around staring with the twin forts of Lohagad and Visapur, along with Kothaligad, Rajmachi (Shri Vardhan, and manoranjan), Tung, Tikona, etc.

The trek to Rajmachi just before monsoon will provide you with the mesmerizing formations of fireflies at night.

Lonavala is also a starting point to the Andharban forest – which is a must-do forest trail in monsoon. Ryewood park at the center of the hill station houses a number of old trees and an old Shiva temple.

Della adventure park is a very famous hill resort and a theme park with a number of adventure activities to indulge into.

The biggest theme parks like Adlabs Imagica and the Magic mountains are also located near Lonavala. This place is a perfect escapade from the humdrum of city life.