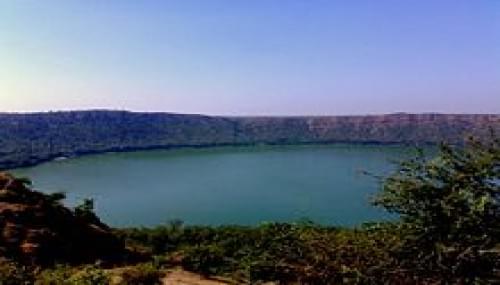 Gallery
Home explore from - to - Lonar

Lonar is believed to be named after a giant “Lonasur” who was killed by Lord Vishnu.

Lonar is a small town in the Buldhana district of the Vidharbha region. The region is located in the central north of Maharashtra in the Amravati division. The district shares its north border with the state of Madhya Pradesh.

Lonar is largely famous for the crater that was formed due to the impact of a meteor, roughly around 52,000 years ago. It is believed that the crater was first discovered by J.E. Alexander (a British officer) in 1823. However, the crater has also been mentioned in the holy scriptures of Padma Puran, Skanda Puran and the Aina-i-Akbari.

Lonar is situated around 360 kms from Nagpur, 550 kms from Mumbai, and 160 kms from Aurangabad. The road and the rail routes are very well connected to the major cities of the state.

The summer here is very dry and hot; which makes winter the best time to visit this place.

The months from November to January are ideal as many migratory birds flock this place during this period. The lake has its own ecological system. The nature of the lake is both saline and alkaline.

The lake is surrounded by low hill, which is covered by dense forest. The jungle is home to several wild species like peafowl, chinkara, gazelles, wolves, ducks, red wattled lapwings, herons, parakeets, and several other migratory birds, etc. The place is perfect for wildlife enthusiasts and bird watchers.

One should definitely not miss the sunrise or the sunset scene from the lake.

The food in Lonar is influenced by both Khandeshi and Marathwada cuisine, making it very unique in itself. Along with the Lonar Lake, there is also a small lake nearby known as – Ambar lake.

There are numerous temples surrounding the lake and the nearby places. The most popular one is the Daitya Sudan temple; It is located at the center of the Lonar town, which was built during the 6th and 12th A.D in the honor of Vishnu’s victory over the giant Lonasur. It is a fine example of early Hindu architecture.

The Gomukh temple lies near the rim of the crater is believed to be holiest by the local devotees. Other popular tourist attractions in Buldhana district are Gajanan Maharaj temple (Shegaon), Anand Sagar, Sindkhed Raja, and the Pentakali dam.