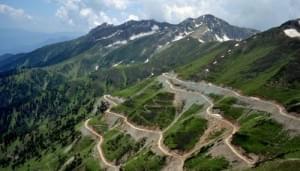 Gallery
Home explore from - to - Kishtwar

Kishtwar District is a newly formed backward district of the state of J&K of India. As of 2011 it is the third least populous district of Jammu and Kashmir. It's famous for world renowned Sapphire & Saffron.

Situated on the banks of River Chenab, Kishtwar is another gem from the crown of Jammu & Kashmir. Situated approximately 255kms away from Jammu city, Kishtwar is surrounded with lofty mountains and dense deodar and pine forests. A perfect place for those who enjoy taking short or long walks or contemplating the natural beauty, Kishtwar is a paradise in its own right. Chowgan, Paddar, Chingam, Sinthan Top, Warwan and Marwah are the places that you must visit. Also a 400 sq km land is under National Park in Kishtwar. There are also two sacred voyages namely, Machail Yatra and Sarthal Yatra that begins from Kishtwar.