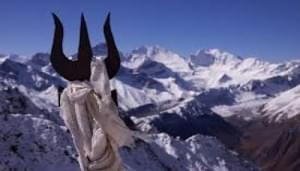 Gallery
Home explore from - to - Kalpa

Kalpa, situated in the Kinner-Kailash range, lies in the Kinnaur District of Himachal Pradesh. The ancient headquarters of Kinnaur region, Kalpa was replaced by the modern town of Rekong Peo. The River Sutlej makes its way through the Great Himalayas along with rock face highways from Kinnaur.

Located in Kinnaur District, the history of the region is influenced by myths and legends. It is believed that the place was under the reign of Magadha followed by the Mauryan Empire during the 6th century. The Guge Kingdom of Tibet also ruled Kinnaur between the 9th and 12th centuries. The history of the district lasted until Emperor Akbar conquered the area and included the valley into the Mughal Empire.

Situated amidst the Great Himalayas, Kalpa has a pleasant climate in summer with extremely cold winters. The months from April to September are ideal to make a visit to Kalpa.