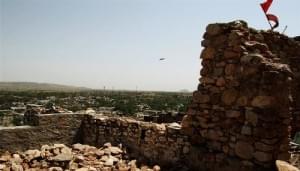 Jamwa Ramgarh also popularly known as the Ramgarh.It was best known for Ramgarh Lake which is now dry.

Ramgarh Lake was an artificial lake situated near Jamwa Ramgarh. At one time the lake was the main source of water supply to Jaipur city. The last time the lake received water was 1999 and it has been dry since 2000. It is situated 32 kilometres from Jaipur and when full covered an area of 15.5 square kilometres.

Jamwai Mata temple is located downstream from Ramgarh Lake in greenery bound area, it is the kuldevi of Kachhwaha rajputs. Previously this town was known as 'manch' and there was a temple of budhvai mata ji and the statue is still there in the same temple.

This is a devotional shrine for the whole of the Kachwaha rajputs.