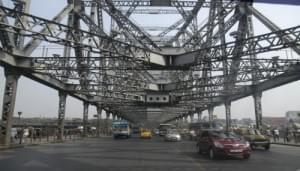 Gallery
Home explore from - to - Howrah

Howrah - once known as the ‘Manchester of Bengal’, this district is located on the western bank of Hooghly River.

Howrah is also the second-largest city of West Bengal & twin of Kolkata, also regarded as the ‘Gateway of Kolkata’. Howrah is considered less modern than the Kolkata side.

The name came from the word Haor which is a Bengali word for a fluvial swampy lake.

Howrah is also famous worldwide for the heavy engineering works. It is often termed as ‘Sheffield of the East’. Howrah is approximately 100 years older than Kolkata. The main attraction of Howrah is the iconic Howrah Bridge, the British era cantilever style bridge commissioned in 1943. It was originally named ‘The New Howrah Bridge’ which was later renamed ‘Rabindra Setu’ after the Nobel laureate Bengali poet Rabindranath Tagore. This bridge connects Howrah & Kolkata with each other and also an icon of West Bengal. This is the busiest & sixth-longest cantilever bridge in the world.

There are also many tourist spots like Belur Math, Shibpur Botanical Garden where tourists can see the Guinness Book of World Records holder the great banyan tree for the widest canopy at 1.5 hectares & with about 2880 prop roots, Second Hooghly Bridge or the Vidyasagar Setu, Bally Bridge or the Nivedita Setu, Howrah Rail Museum, Santragachi Jheel, Phuleswar, Damodar Temple & many other places.

You can reach Howrah by flight as the Netaji Subhash Chandra Bose International Airport is 28 Km away from there. Howrah is also well connected with other major cities by railways & Howrah Railway station is one of the busiest railway stations of India.

There is also Howrah Bus Stand which is also well connected with other cities by bus network.