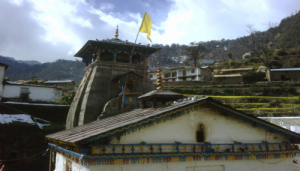 Gallery
Home explore from - to - Guptkashi

Guptakashi, Gupta Kashi or Guptkashi is a fairly large town located at an elevation of 1,319 metres (4,327 ft) in the Kedar-khanda ('khanda' means "sector"), in Garhwal Himalayas of Rudraprayag district in Uttrakhand. It is famous for the ancient Vishwanath Temple - dedicated to god Shiva - similar to the one in Varanasi (Kashi). The other famous temple here is dedicated to Ardhanareshvara (a half man half woman form of Shiva and Parvati).

The name Guptakashi has legendary significance linked to the Pandavas, the heroes of the Hindu epic Mahabharata. Its religious importance is considered next to that of Varanasi, believed to be the most pious of all Hindu pilgrimage places.

Located 1300 meters above sea level, it is famous for its weather (pleasant most of the year, but very cold in December and January) and its temples.