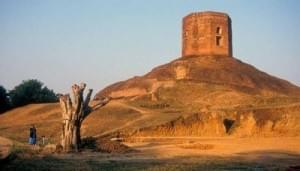 Gallery
Home explore from - to - Chitrakoot

Chitrakoot 'the hill of many wonders,'nestles peacefully in the northern spurs of  the Vindhyas, a place of tranquil forest glades and quiet rivers and streams.

It is sacred place for Hindu region followers as during exile, Lord Rama, along with wife Sita and brother Laxman, spend considerable in Chitrakoot forest area due to which this place became a sacred place for Hindus and devotees visit this place, throughout the year. During that time, Chitrakoot forest is known for the presence of many great Hindu saints like Rishi Atri, Sati Ansuya, Maharishi Markandeya, Dattatreya etc. It is spread over the hill so of Vindhya ranges. Historical Mandakini river flows through Chitrakoot whose reference comes in Hindu epic "Ramayana". Throughout the year, we can find an even number of devotees, visiting this holy place.

During Diwali festival, i.e October - November month, here huge crowd of devotees gathers and celebrate the festival. It is the peak season of Chitrakoot.